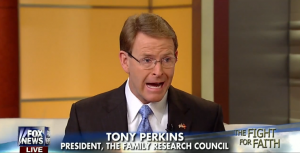 Family Research Council President Tony Perkins once again showcased his amazing dancing skills as he tapdanced around all logic and reason during an interview with Fernando Espuelas on the issue of religious freedom laws.

Perkins was recently Espuelas’ guest on his Matter of Fact talk show. During the discussion, Espuelas pointed out that Perkins has shown support for many so-called “religious freedom” laws, and noted that FRC President was currently defending North Carolina’s controversial law.

Perkins framed North Carolina’s law as a “public safety,” and also tried to justify Mississippi’s “broader” religious freedom laws as protections needed to keep Christians from being penalized by the government for practicing their faith:

We’re talking about forcing someone to take their creative ability, their talent and force them,” Perkins insisted. “This is almost forced servitude, saying that you have to be a part of this or the state is going to punish you.

Perkins disagreed: ‘We’re talking about marriage. That is a sacred institution. Just three years ago the president had the same view.”

No one can deny that marriage is a religious ceremony,” Perkins insisted. “And you’re forcing someone to violate their beliefs.

No, and it’s very clear, and the reason why you support is why?” Espuelas countered. “You support it because specifically these laws allow businesses to discriminate against gay people. Because you have a point of view regarding it.

No,” Perkins gasped. “It allows people to live out their religious freedom.

In 2010, the Southern Poverty Law Center designated Perkins’ Family Research Council as a hate group, describing the organization as a “font of anti-gay propaganda throughout its history.”

The SPLC cited a 1999 publication by the FRC titled: Homosexual Activists Work To Normalize Sex With Boys, as just one example of how the FRC actively spread hatred and homophobia. The publication stated:

One of the primary goals of the homosexual rights movement is to abolish all age of consent laws and to eventually recognize pedophiles as the ‘prophets’ of a new sexual order.

To his credit, Espuelas did not allow Perkins to get away with falsely framing the conversation. The host repeatedly made Perkins address the apparent civil rights violations that religious freedom laws are designed to promote.

Perkins along with Republican primary candidate Senator Ted Cruz (R-TX), are under the delusion that the American people as a whole will magically discard the concept of social justice and vote for candidates who support religious freedom laws in a general election.

Hopefully, religious freedom supporters will be in for a rude awakening come November.