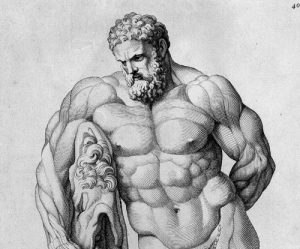 Illustration of the statue of Hercules in the Farnese Palazzo in Rome.
Engraving, 1723. Wellcome Library reference: 2817376.

The beard is an outward marker of the masculine form, one that can be shaped, moulded, and trimmed to its owner’s fancy. Facial hirsuteness has long been used as a defining characteristic of masculinity in literature, art, history, and popular thought. Masculine figures in epic and Biblical stories, from the Greek and Roman gods, to Hercules, Samson, and Odysseus, are often described by, and sometimes defined by, the quality of their hair and beard.

Many historic cultures in Western Europe have taken strong stances on proper facial decorum: the full-bearded Lombards, the mustachioed Anglo-Saxons, the bare-faced pre-Hadrian Romans. This post provides a series of street-light glimpses along the long road of the bewhiskered history of man and his relationship with the beard.

The Latin word for beard, barba, -ae, provides the root for the Latin and English equivalent of ‘barbarian’. Barba is used very commonly through the classical Latin corpus, however, the sentiment behind the beard, or the bearded one, changes through the Roman classic period, and this shift can be seen in examples given by Lewis & Short in their dictionary entry. The word “barbaria” is a term that takes its root from barba and comes into common use in Cicero‘s writings, who was living at a time when beards were not in fashion. Barbarians, or those from a foreign land, or literally “the bearded ones,” were figures that the Roman empire was constantly coming into contact with as their borders expanded. The beard, then, in Cicero’s time was used to identify the non-Roman, the foreign element. Barbaria is also a term used for rudeness or savageness and further sets apart the Roman civic, clean-shaven, attitude from the bearded foreign attitudes. 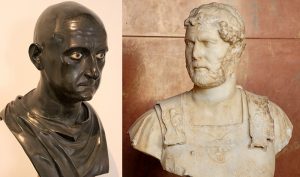 Classical attitudes towards facial hair styles, just as fashion, were usually dictated by depictions of emperors and of the upper-class. Pre-Hadrian Roman emperors are mostly depicted with a clean-shaven face, a carry-over from the Greek style imposed during and after Alexander the Great’s rule, from around 300 B.C.E. This is exemplified by Scipio Africanus, the famous general of the Second Punic Wars, who is the first, as recorded by Pliny, to allowed himself to be shaved every day. When Hadrian took control of the empire (117 C.E.) styles and attitudes towards beards began to change. Hadrian wore a beard to hide his facial scars, however, his beard was also used as an expression of his Philhellenism, and would be the reason why most Roman emperors following Hadrian wore their beards.

The Bayeux Tapestry provides a unique example of the use of beards to depict certain peoples in medieval art. Bearded males can be found in many different forms of medieval art, especially manuscript illumination and sculpture. However, the Bayeux Tapestry, being a woven pictorial tale of the conquest of the Norman forces led by Duke William over the English Earl Harold Godwinson in the year 1066, depicts a nation of bearded and mustachioed men (the English) defending their country against the bare-faced invaders (the Normans). 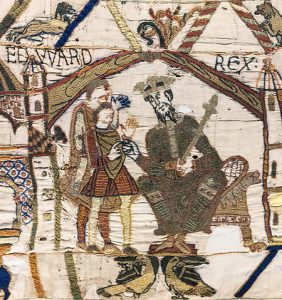 The first scene of the Bayeux Tapestry, depicting the bearded Edward the Confessor and moustachioed Harold Godwinson at Winchester; image courtesy of Wikimedia Commons.

In the scenes that feature both Norman and English, most of the English are given small one-line moustaches, and it is this type of moustache that is used to distinguish Harold from William in their scenes together. Edward the Confessor is always depicted with full beard, and Harold with a moustache until his coronation. The most distinct scene of beard versus no-beard is panel 157 which shows the English being routed from a hill in defense from the Normans. This is the battle of Senlac Hill of 14 October 1066, in which the bare-faced Norman cavalry storm the mustachioed or bearded English strong hold, clearly evoking the clean-shaven Romans of the past.

The Battle of Senlac Hill, from the Bayeux Tapestry. Image courtesy of Wikimedia Commons.

An ethnography of facial hair

In the mid-17th century, John Bulwer published four different books exploring the theme of the human body as communication. His most successful work, Anthropometamorphosis (or “Humanity-changing”), was first printed in 1650, and then largely enlarged and illustrated with engravings in an edition of 1653. This work explored the races of the world, and the strange things they do to their bodies and how these acts derivate from the course that Nature intended. 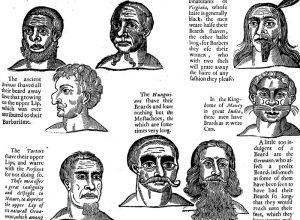 Bulwer devotes an entire chapter of his work to pogonotrophy, entitled: “Beard-haters, or the opinion and practise of diverse Nations, concerning the naturall Ensigne of Manhood appearing about the mouth.” In this chapter, races are described by how they treat their moustaches or beards, if they shave or pluck their beards, how long they let their beard grow, or how the beard is treated and how greatly they derivate from Nature’s course: “The Tartars shave their upper lips, and warre with the Persians for not doing so. These men offer a great indignity and despight to Nature, to deprive the upper lip of its naturall ornament.” Men who do not treat their facial hair so poorly, who cherish and cultivate what “Nature” has provided, such as the Germans and the Greeks, are given a warmer treatment. This catalogue of ethnographic hirsuteness provides a unique look at what type of facial hair was considered proper in mid-17th century England.

A tax on all beards

There are fewer greater examples of power over the individual body than the decree against the beard by Peter I of Russia. In an act to move Russia towards kinship with a modernizing Europe, a decree was issued 16 January 1705, that men of all ranks, including merchants and artisans, were ordered to shave, but anyone who wished to keep beard and whiskers was given the option to pay a fine and in return was issued a beard token, or znak: 30 roubles (equivalent to 15 English pounds in 1705 or over £2000 in today’s currency) for members of the third guild, boyar’s bondslaves, postal drivers, coachmen, junior deacons and Moscow residents; 60 roubles from middle guild merchants and artisans, for nobles, military officers, and chancellery officials; and 100 roubles for merchants of the first guild. Bearded residents of other towns had to come to Moscow to get a znak from the Police Office and to display their tokens at all times. 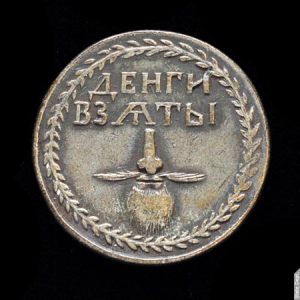 A znak, or beard token, issued for the payment of a tax for wearing a beard under Peter the Great in 1705; from the Smithsonian Collection, image courtesy of Wikimedia Commons.

These beard tokens were designed to be worn or presented upon inquiry, and provided the wearer with a second beard, a reaffirmation of their control over their personal property. Those that did not shave, and did not carry the znak were in danger of persecution by the domestic police (a branch of which, under Peter I’s reign, was solely dedicated to policing beard and clothing style) fining them and possibly even shaving them. According to Cornelius de Bruyn, who first visited Moscow in 1711, the Tsar’s orders were executed by men who went around the street shaving “all manner of persons without distinction, many of whom would not be comforted for the loss of their beards.”

Peter’s beard tax didn’t fill the coffers with money, but it did provide him with a way to influence an entire nation of bearded comrades to shave their antiquated style away and step into the modern, European arena.