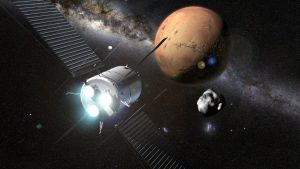 Nearly 50 years after landing on the moon, mankind has now set its sights on sending the first humans to Mars. The moon trip took three days; a Mars trip will likely take most of a year. The difference is in more than just time.

We’ll need many more supplies for the trip itself, and when we get to the Red Planet, we’re going to need to set up camp and stay for a while. Carrying all this material will require a revolutionary rocket technology. 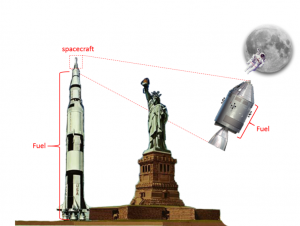 Saturn V rocket drawn to scale with Statue of Liberty. Apollo spacecraft and the moon are not to scale / Creative Commons

The Saturn V was the largest rocket ever built. It consumed an enormous amount of fuel in explosive chemical reactions that propelled the Apollo spacecraft into orbit. After reaching orbit, Apollo ejected the empty fuel tanks and turned on its own chemical rockets that used even more fuel to get to the moon. It took nearly a million gallons of various fuels just to send a few people on a day trip to our nearest extraterrestrial body.

So how could we send a settlement to Mars, which is more than 100 times farther away than the moon? The Saturn-Apollo combination could deliver only the mass equivalent of one railroad boxcar to the moon; it would take dozens of those rockets just to build a small house on Mars. Sadly, there are no alternatives for the “chemical” launch rocket; only powerful chemical explosions can provide enough force to overcome Earth’s gravity. But once in space, a new fuel-efficient rocket technology can take over: plasma rockets.

The ‘electric vehicles’ of space

Plasma rockets are a modern technology that transforms fuel into a hot soup of electrically charged particles, known as plasma, and ejects it to push a spacecraft. Using plasma rockets instead of the traditional chemical rockets can reduce total in-space fuel usage by 90 percent. That means we could deliver 10 times the amount of cargo using the same fuel mass. NASA mission planners are already looking into using plasma rocket transport vehicles for ferrying cargo between Earth and Mars. 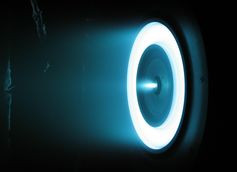 The main downside to plasma rockets is their low thrust. Thrust is a measure of how strong a “push” the rocket can supply to the spacecraft. The most powerful plasma rocket flown in space, called a Hall thruster, would produce only enough thrust to lift a piece of paper against Earth’s gravity. Believe it or not, a Hall thruster would take many years of continuous pushing to reach Mars.

But don’t worry, weak thrust is not a deal breaker. Thanks to its revolutionary fuel efficiency, plasma rockets have enabled NASA to perform missions that would otherwise not be possible with chemical rockets. Just recently, the Dawn mission demonstrated the potential of plasma rockets by becoming the first spacecraft to orbit two different extraterrestrial bodies.

While the future of plasma rockets is bright, the technology still has unsolved problems. For example, what’s going to happen to a thruster that runs for the many years it takes to perform round-trip cargo missions to Mars? Most likely, it’ll break.

That’s where my research comes in. I need to find out how to make plasma rockets immortal. 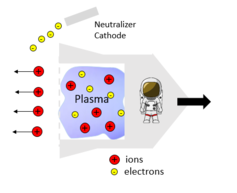 To do this, we need to understand how a plasma rocket works. The rocket creates a plasma by injecting electrical energy into a gaseous fuel, stripping negatively charged electrons from the positively charged ions. The ions are then shot out the back of the rocket, pushing the spacecraft forward.

Unfortunately, all that energy in plasma does more than propel spaceships – it wants to destroy any material it comes into contact with. Electric forces from the negatively charged walls cause the ions to slam into the wall at very high speeds. These collisions break atoms off the wall, slowly weakening it over time. Eventually, enough ions hit the wall that the entire wall breaks, the thruster stops functioning and your spacecraft is now stuck in space.

It’s not enough to use tougher materials to withstand the bombardment: There will always be some amount of damage regardless of how strong the material is. We need a clever way of manipulating the plasma, and the wall material, to avoid damage.

Wouldn’t it be great if the chamber wall could repair itself? It turns out there are two physical effects that can allow this to happen. 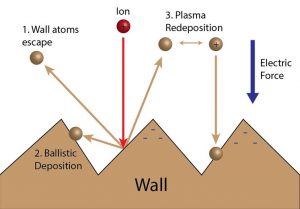 Illustration of three possible scenarios for a wall atom that comes off: 1) it’s lost forever, 2) it intercepts a wall and deposits or 3) it becomes ionized and is accelerated by electric forces to deposit on the wall. / Creative Commons

The first is known as ballistic deposition and is present in materials with microscopic surface variations, like spikes or columns. When an ion hits the wall, a piece of these microfeatures that breaks off can fly in any direction. Some of these pieces will hit nearby protruding parts of the surface and stick, leaving the wall effectively undamaged. However, there will always be atoms that fly away from the wall and are lost forever. 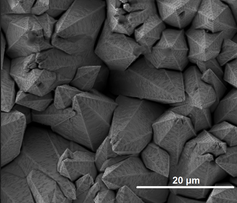 The second phenomenon is less intuitive and depends on the plasma conditions. Imagine the same scenario where the wall particle breaks off and flies into the plasma. However, instead of being lost forever, the particle suddenly turns around and goes straight back to the wall.

This is similar to how a baseball tossed straight up into the air turns around and drops back to your hand. With the baseball, gravity stops the ball from going up any higher and pulls it back down to the ground. In a thruster, it’s the electric force between the negatively charged wall and the wall particle itself. It comes off neutrally charged, but can lose its electron in the plasma, becoming positively charged. The result is that the particle is pulled back toward the wall, in a phenomenon known as plasma redeposition. This process can be controlled by changing the density and temperature of the plasma.

Then I turned my attention from the plasma to the wall. The first microfeatured sample I tested had its damage reduced by 20 percent. By improving the design of the microfeatures, the damage can be reduced even further, potentially as much as 50 percent. Such a material on a thruster could make the difference between getting to Mars and getting stuck halfway. The next step is to include the effects of plasma redeposition and to determine whether a truly immortal wall can be achieved.

As plasma thrusters become ever more powerful, they become more able to damage their own walls, too. That increases the importance of a self-healing wall. My ultimate goal is to design a thruster using advanced materials that can last 10 times as long as any Mars mission requirement, making it effectively immortal. An immortal wall would solve this problem of thruster failure, and allow us to ferry the cargo we need to begin building mankind’s first outpost on Mars.