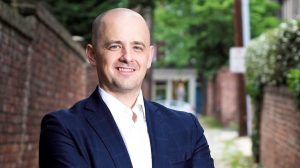 Utah. It is one of, if not the most conservative states in the nation, largely thanks to the Church of Jesus Christ Of Latter Day Saints, aka the Mormons. And as such it is usually a solid, bright red state on the electoral maps. Utah has gone for the Democratic presidential candidate exactly once in the past 64 years — in the anti-Goldwater wave of 1964. But this year it is possible that Utah will not be in the Republican column when the votes are added up. That is, at least not in the Republican column headed by Donald Trump, who is largely being rejected by voters in the Beehive State.

Many Utah voters with strong religious beliefs are not happy with Trump, and unlike many Christian evangelical leaders who have decided to stay hitched to his wagon despite the allegations of improper sexual conduct, Utahans are bolting, putting the state in play. The Young Turks sent Michael Shure to the state to find out what was on people’s minds, and what many of them had to tell him was quite clear — they don’t think Trump is a good representative of their Christian beliefs.

None of the young Utahans Shure spoke to said they planned to vote for Trump. Some said they would vote for Gary Johnson. One college student indicated that he would consider a vote for Hillary. But the name that seemed to come up more than any others was Evan McMullin.

McMullin is the Republican who is running an independent campaign for president. He is also a Mormon, which gives him a huge advantage in Utah. Some recent polls of the state have McMullin polling even with Clinton, but still trailing Trump. But as Benjamin Morris notes at FiveThirtyEight, there are questions about the methodology of those polls that could mean McMullin’s support in Utah is even greater than he is getting credit for.

Whether McMullin wins in Utah or whether Trump is able to squeak out a razor thin victory, one thing is certain: unlike many of their traditional “Christian” counterparts in the deep south and the rest of the Rocky Mountain region, many Mormons want no part of Trump or his policies, which some of them were quite willing to tell Shure that they considered to be un-Christian. Not only will a loss of Utah further hurt Trump’s slim chances of winning the White House, a McMullin win there would make him a footnote in future history books as the first third-party candidate since George Wallace in 1968 to win electoral votes.

Here’s Michael Shure’s report on the mood in Utah, via YouTube: