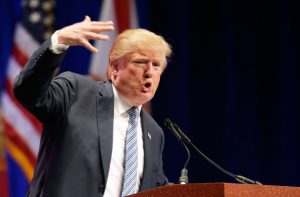 President-elect Donald Trump decided to take to his favorite medium once again, this time to conduct a bit of foreign policy.  Recall the following from a New Hampshire rally during the campaign:

Trump was pumping up a crowd there, and one would think that would certainly not be how he would deal with other countries as a president.  One would be wrong.

In two Tweets today, our leader-to-be decided to poke the bear again: 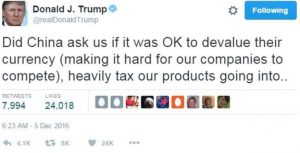 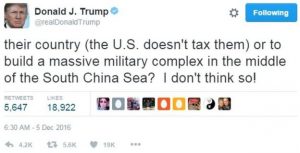 He decided to hit them on unfair taxes (where fair arguments can be made, diplomatically) as well as their current base in the South China Sea (leaving out our own questionable presence in certain areas, yet this is still strategically important to the U.S.).

Someone needs to teach this man about diplomacy, maybe send him to at the very least a junior college introductory class in international relations.

Many Progressives were horribly concerned, with no evidence, that Hillary Clinton would take us to war with Russia and Iran.  Did they ever stop to consider this?

Our President-elect throws frequent temper-tantrums over Saturday Night Live, and his diplomatic agenda looks to be on the same childish, ill-informed track.