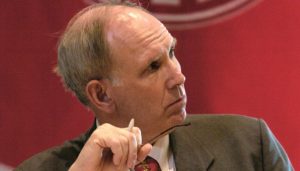 Donald Trump, like any bully, loves to talk crap, but when his victim stands up to him, he always, every single time, backs down. While Trump is a bit beyond the age of schoolyard scuffles (don’t tell him that), he does like to challenge people who are much smarter than him to intellectual “scuffles.” One such smart person is retired Col. Jeff McCausland, who is a military expert – one Trump thinks he can teach “a couple things.” McCausland says, bring it on. Trump won’t.

McCausland is a visiting professor of international security studies at Dickinson University. He’s the former dean of the Army War College. He’s also a retired army colonel, so, yes, he knows a thing or two about military strategy. He says Trump doesn’t “know a damn thing” about it.

Trump, when asked about it by George Stephanopoulos, couldn’t leave well enough alone. Instead, Trump said about McCausland, “You can tell your military expert that I’ll sit down and I’ll teach him a couple of things.”

McCausland, on Dickenson University’s website, had a response for Trump:

“I can’t wait to sit down with Mr. Trump and hear what he has to teach me about military strategy. I’m happy to compare my record of over 45 years working in national security affairs with his any time. First, let’s review Donald Trump’s record on military strategy.

“He never served in the military and never served the government. During the primary campaign, Mr. Trump also made it very clear that he had no understanding of the nuclear triad or nuclear strategy. This is perhaps the most important thing any potential commander-in-chief needs to understand.”

He goes on to talk about specifics and how Trump is literally wrong about everything, but especially his assertion that Mosul is a “disaster.”

The attack on Mosul is turning out to be a total disaster. We gave them months of notice. U.S. is looking so dumb. VOTE TRUMP and WIN AGAIN!

“When it comes to the question of the Mosul offensive, Mr. Trump doesn’t understand that 99.9 percent of the troops involved are Iraqi. War remains politics by other means, as Clausewitz once said. The Iraqi government has had a political imperative to publicly state that they would liberate Mosul since it was occupied by ISIS over two years ago. It is the second largest city in the country, and consequently Prime Minister Abadi has had a political imperative to reassure the Iraqi people that this was a goal. Iraq is a sovereign state, which has always been a goal of U.S. policy, so once cities like Ramadi or Fallujah in southwestern Iraq were liberated, everyone knew Mosul was next.”

He also criticized Trump’s plan to take the oil from Iraq, saying that it would take a mind boggling number of troops and would create a lot of casualties. He also says that the population of Iraq would never stand for it. Why would they. Plus, it’s a war crime. Not that Trump cares about that.

In the end, he simply says, “I reassert my statement to the New York Times: Mr. Trump doesn’t know a damn thing about military strategy.”

The fact is, Trump has literally zero experience with military strategy. Like so many rich kids, he never served in Vietnam. In fact, the man who touts his stamina on the campaign trail was excused from the war for having bone spurs on the heels of his feet. Trump is dangerous, and as so many have said, he should be allowed within miles of the nuclear codes.