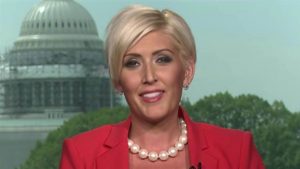 Like millions of Americans, Donald Trump appears to suffer from insomnia, especially when things are going horribly wrong for his campaign. Trump obviously didn’t get much sleep Thursday night/Friday morning, since he was up at least half the night insulting the media, Hillary Clinton and slut shaming former Miss Universe, Alicia Machado. All of this is proving too much for Trump’s senior press person, Healy Baumgardner, who quit.

Trump started the early morning off with an attack on the media.

Anytime you see a story about me or my campaign saying “sources said,” DO NOT believe it. There are no sources, they are just made up lies!

Then, instead of apologizing for fat shaming Machado, as he has continuously done since the debate, Trump doubled down into slut shaming.

Wow, Crooked Hillary was duped and used by my worst Miss U. Hillary floated her as an “angel” without checking her past, which is terrible!

Using Alicia M in the debate as a paragon of virtue just shows that Crooked Hillary suffers from BAD JUDGEMENT! Hillary was set up by a con.

What is this past, you ask? Well, according to Trump, there’s a sex tape:

Did Crooked Hillary help disgusting (check out sex tape and past) Alicia M become a U.S. citizen so she could use her in the debate?

All of that proved too much for Trump’s now former senior press rep, Healy Baumgardner, who just a month or so ago, was defending Trump’s insults.

Still, this latest round proved to be too much for Baumgardner, who resigned, saying, “It is clear the campaign is now going in a direction I am no longer comfortable with and I have decided to move on.”

Not that it’s a huge loss for the Trump campaign. Baumgardner was hardly the sharpest tool:

Apparently, though, she was smart enough to read the writing on the wall. Trump is in a real hole with women and his constant fat shaming is not helping.