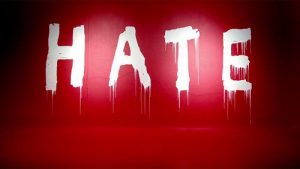 Donald Trump has warned us about those Mexican rapists. Apparently the country also has body snatchers.

The Republican presidential nominee immigrated briefly to Mexico on Wednesday for a hastily arranged visit with the leader of the country he has made his No. 1 scapegoat. He spent all of an hour with President Enrique Pena Nieto — but when the two men emerged, whoever was occupying Trump’s body sounded nothing at all like the bombastic billionaire.

“In the United States, first-, second- and third-generation Mexicans are just beyond reproach — spectacular, spectacular, hard-working people. I have such great respect for them and their strong values of family, faith and community,” this Trump look-alike declared in Mexico City.

The impostor gushed about a “common interest in keeping our hemisphere safe, prosperous and free,” and waxed poetic about “joint operations between our two countries.” Trump said the countries should be “working beautifully together, and that, I am sure, will happen.”

And the North American Free Trade Agreement, which Trump had called a “disaster” and promised to “rip up”? This Trump doppelganger spoke instead about “improving NAFTA” and making sure it’s “updated.” He pronounced Pena Nieto “a friend.”

A reporter asked: Did they talk about his constant vow to get Mexico to pay for the border wall he wants to build?

What had they done with Trump?

Alas, within hours, he was back to his xenophobic self. The bickering began even before he cleared Mexican airspace, as Pena Nieto, contradicting Trump, said he had told Trump at the beginning of the meeting that Mexico would not pay for a wall.

But Trump, having completed his photo op with the Mexican president, discarded the “friend” he had apparently just used as a prop. Trump landed in Phoenix for what was supposed to be a detailed “policy address” on immigration but was a familiar, nativist rant. Preceded at the lectern by Joe Arpaio, the Arizona sheriff and anti-immigration hard-liner, Trump launched into a lament for the “countless Americans” who are “victims of violence” by illegal immigrants who are “dangerous, dangerous, dangerous criminals.”

“We will build a great wall along the southern border!” he said to an enormous cheer.

So much for working beautifully together.

This was the Trump we all knew, the Trump who questions the judicial independence of an American-born judge because of his Mexican heritage, who fights with Mexican American journalists, and who asserts that Mexico is “killing us.”

Trump’s trip to Mexico was something of a Hail Maria, as polls show Democratic rival Hillary Clinton with a yuuge advantage and Democrats with a better than even chance of taking back the Senate. And from Arizona and Florida on Tuesday came new signs that Trump’s rebellion has fizzled.

In Arizona, Kelli Ward, a pro-Trump primary challenger, had been trying to oust Sen. John McCain, whose war heroism Trump famously belittled, with a “defeat the establishment” theme like Trump’s. She lost by 13 points. In Florida, Carlos Beruff said that he “supports Donald Trump 100 percent,” while his primary opponent, Sen. Marco Rubio, did not. Beruff lost by 54 points.

But Trump’s attempt at appearing diplomatic was only a feint. If his core supporters were worried — and if the rest of Americans were reassured — that he was softening his hard-line position, they had to wait only until he spoke in Phoenix on Wednesday night.

In Mexico City, Trump endured without complaint a lecture from the Mexican president, who said that NAFTA has been good for “the U.S. as well as Mexico” and that the U.S. Chamber of Commerce thinks that more than 6 million American jobs rely on trade with Mexico. Pena Nieto said that immigration from Mexico to the United States peaked 10 years ago and is now at a net negative. “Mexican nationals in the United States are honest people, working people,” he said. “Mexicans deserve everybody’s respect.”

Trump almost seemed to agree. “Illegal immigration is a problem for Mexico as well as for us,” he said. “We will work together and we will get those problems solved.”

But back on American soil, he returned to his familiar lines: “It’s called America First! … There will be no amnesty! … You cannot obtain legal status or become a citizen of the United States by illegally entering our country.”

The real Donald Trump was back. Alas.