In the Medieval Middle

There is a particularly harrowing scene in Mad Men, when Don Draper—the advertising executive at the center of the show—exhibits his dominance over one of his (very many) sexual partners and adversaries by grabbing her by the crotch. There is nothing sexy or seductive about the action. It is violent. It is chilling. It is hard to watch.

But what it is not is anomalous.

Last week we all saw a video in which we can hear, loud and clear, the voice of the GOP nominee for president boasting about his sexually predatory behavior against women. He  says,

I just start kissing them. It’s like a magnet. Just kiss. I don’t even wait.

And when you’re a star, they let you do it. You can do anything.

Grab ’em by the pussy. You can do anything.

Despite the barrage of misogynist statements he’s spewed on radio and television over the last year, it was this clip which finally shook the members of his political party out of their willing slumber. They have condemned him, expressed varying degrees of outrage, said they’re sickened by his words. They’ve virtually stampeded towards the EXIT sign away from their party’s nominee for president.

As if his words represented something never before heard, never before seen, so deviant, that only now can they see him for the monster that he is.

Many readers of this blog were surely reminded of Chaucer’s description of Nicholas’s assault on Alison,

Medieval objects feature this gesture commonly (more commonly than we’d imagined, in fact; but Damian uncovered a number of these images relatively quickly and with ease). In certain cases, as in the Taymouth Hours, the gesture is an explicit sign of sexual violence, condemned by the caption below. 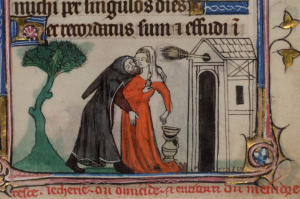 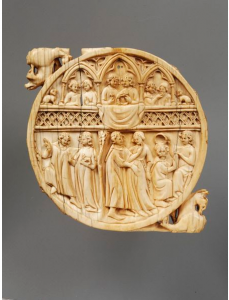 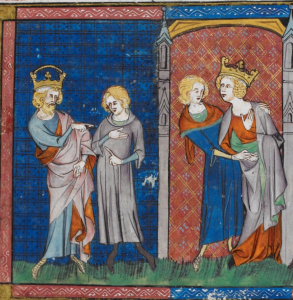 Notice how in two of those images, the woman who are being groped and grabbed and seized make gestures of shock. With their hands up and, in one case, body turned away, they register the full horror of the assault.

One of the most significant contributions of this blog has been to show us how much we live with the Middle Ages today, how much we speak with phrases uttered hundreds of years ago, how much we see with eyes primed by visual traditions of the medieval past. And one of the consequences of this knowledge is that we can no longer dismiss as anomalous behaviors that are objectionable and damaging. Nor can we condemn as anachronistic or opportunistic scholars who would see in medieval art and literature deep resonance with our culture today. The words spoken by the Republican nominee for president emerge from our cultural legacy. It is up to us to engage with that legacy until the day that is so truly beyond the pale of understanding, so alien, that it becomes impossible to act and illegible to read.