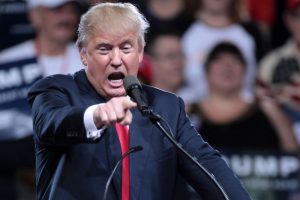 Republican Presidential nominee Donald Trump is now cheering on and encouraging hacking by Russian hackers increasingly — and strongly — believed by experts to be working for the Russian government to undermine Democratic Presidential nominee Hillary Clinton. Trump’s own running mate Sen. Mike Pence is distancing himself from Trump, but I’m betting Sean, Rush, and many conservative Internet writers will not repudiate it but a)defend it, b)try to change the subject, c)do a mixture of defense and changing the subject.

It’s a unique moment in American political history: the nominee of a political party cheering on hackers to not just hack into the Democratic National Committee’s emails, but into a former Secretary of State’s private emails written when she was Secretary of State.

What’ was that old conservative book? “None Dare Call it Treason.” This is NOT from The Onion:

Donald Trump on Wednesday said he hopes Hillary Clinton’s deleted emails have fallen into the hands of Russian hackers.

“If they hacked, they probably have her 33,000 emails. I hope they do,” Trump said at a press conference at his resort in Doral, Florida.

The Republican presidential nominee was referring to the widely held suspicion that Russia is responsible for hacking the Democratic National Committee’s servers, resulting in the leak of tens of thousands of emails just days before the party’s nominating convention in Philadelphia.

Trump said that he hoped the hackers had also accessed Clinton’s private email servers. “They probably have her 33,000 emails that she lost and deleted.”

Trump then addressed the rogue nation directly, saying “Russia, if you’re listening, I hope you’re able to find the 30,000 emails that are missing.”

By actively hoping that American servers were hacked by another nation, Trump broke an unwritten but cardinal rule of American public office: You don’t root against the United States, even when your political opponent is in power.

Regardless of party or platform, American public officials are expected to champion U.S. interests and defend U.S. national security. Trump seemed to do the opposite Wednesday.

Within moments of Trump’s press conference, his running mate, Indiana Gov. Mike Pence (R), released a statement distancing himself from the nominee’s words. “If it is Russia and they are interfering in our elections, I can assure you both parties and the United States government will ensure there are serious consequences,” Pence said.

Trump, however, doubled down on his demand for Clinton’s emails in a tweet shortly after the press conference.

Americablog’s John Aravosis has an excellent post that brings all of these strands together. Here’s the beginning of it:

There’s growing concern that Russia’s Vladimir Putin may be trying to influence the US presidential election on behalf of Donald Trump.

As the story is finally getting attention, I wanted to summarize the issue, and point you in the direction of some of the best reporting out there.

In a nutshell, it is believed that Russian intelligence broke into the computer network of the Democratic National Committee in Washington, DC, stole tens of thousands of emails over a period of a year or longer, and then had Wikileaks publish 19,000 of those emails right before the Democratic Convention in order to embarrass Democrats and help Donald Trump. It is expected that the Russians will have Wikileaks publish even more emails as the election comes closer.

But there’s a second part to the story: That Donald Trump has far too many connections to the Russians for comfort, especially in light of Trump’s bizarrely pro-Russian views on foreign policy.

There is a lot more so read Aravosis entire post.

The amazing irony THE REPUBLICAN PARTY now has a nominee who is cheering on a former KGB agent in hacking and hoping the Russian government find emails written by a then Secretary of State of the United States.

If GOPers let it stand, it is now fully the Trumpublican Party..

I know I keep saying this, but: Trump has just done something *never* seen before in politics. In a bad way https://t.co/r5KGmm9DsL by me

Definition of Treason: a violation of allegiance to one’s sovereign or to one’s state. Mr. Trump, you have committed treason. Drop out!