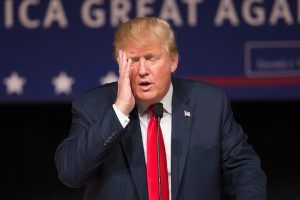 Another day, another real Trump controversy. While the media hyper-focuses on Hillary Clinton’s “pay-for-play” scandal (that wasn’t actually a scandal, just crappy reporting from the Associated Press), a Washington Post report has found a major smoking gun regarding the Trump Foundation:

Donald Trump spent more than a quarter-million dollars from his charitable foundation to settle lawsuits that involved the billionaire’s for-profit businesses, according to interviews and a review of legal documents.

Totaling over $258,000 in Foundation money, Trump may have been involved in has violated laws against  what is known as “self-dealing” (something Trump is used to) which prohibits nonprofit leaders from using their charity’s money to benefit themselves or their private businesses.

So not only has the Trump Foundation been found to have illegally contributed to politicians, it has been found to be engaging in self-dealing. And people think the Clinton Foundation is immoral?

Here are some of the examples:

In those cases, tax experts said, Trump was not allowed to simply keep these items and display them in a home or business. They had to be put to a charitable use.

He did not use the paintings nor the helmet for charitable use, but rather personal use. Which is, as tax experts and the laws say, is illegal.

So turns out the only “crooked” one in this race is Donald Trump, and the only fraud isn’t the Clinton foundation, but the Trump Foundation. Illegal contributions, illegal lawsuit payoffs, and personal gifts with other people’s money (for non charitable use).

Of course, the Clinton campaign hit on the issue, saying Trump is a “fraud who believes the rules don’t apply to him, ” and that “Clearly the Trump Foundation is as much a charitable organization as Trump University is an institute of higher education.” Ouch.

Let’s see Fox News and the Trump camp try to spin this.

Simply put, Trump needs to be forced to pay back all that he stole from donors and all that was used illegally. And if doesn’t, he should be prosecuted for being the fraud he is.