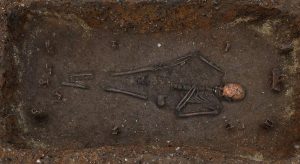 The skeleton of the teenage girl, and the remnants of her burial, as discovered by Cambridge University archaeologists in 2011 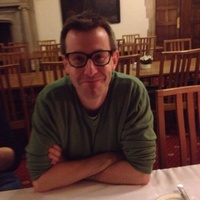 She was buried in her bed on the outskirts of the Cambridge, some 1,300 years ago.
But hers was no ordinary burial.

As well as the highly unusual ‘bed burial’ (less than 20 have ever been found), the mysterious teenager was also laid to rest with a stunning gold cross.

This identifies her as one of England’s earliest converts to Christianity – and makes the settlement one of the oldest Anglo-Saxon Christian burial sites in Britain. 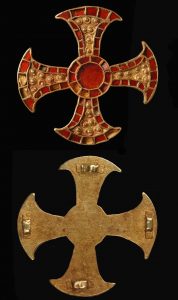 Front and back views of the Trumpington Cross

Who she was remains a mystery, but the discovery of her body – and the extremely valuable gold cross she was buried with – offers unique insights into the origins of English Christianity.

Now, the 7th Century Trumpington Cross is to go on display at Cambridge University’s Museum of Archaeology and Anthropology – just a few, short miles from where it was discovered in 2011 to worldwide interest.

The Trumpington Cross, made of gold and garnet, was found on the skeleton of a 14-18-year-old female laid to rest in the extremely rare ‘bed burial’ ceremony.

Only a handful of Anglo-Saxon bed burials have ever been discovered in the UK – and the pectoral cross is only the fifth of its type found to date.

The 3.5cm diameter Trumpington Cross comes from one of the earliest Christian burials in Britain, probably dating between AD650-AD680. Because the earliest Anglo-Saxon converts to Christianity were from noble families, with its adoption filtering down through the social hierarchy, the teenager buried at Trumpington Meadows was undoubtedly of aristocratic or even royal status.

Although buried with treasured possessions including gold and garnet pins, an iron knife, glass beads and a chain which would have hung off her belt, it was the unexpected presence of the cross –which marks the teenage girl as an early convert to Christianity – which most excited Cambridge University archaeologists.

Thought to be worth in excess of £80,000, the cross has been generously gifted, under the 1996 Treasures Act, to Cambridge University’s Museum of Archaeology and Anthropology (MAA).

It has been donated by Grosvenor, the owners of the land upon which Cambridge University archaeologists discovered the burial site in 2011.

Jody Joy, Senior Curator at the museum,said: “MAA has one of the best collections of Anglo-Saxon artefacts in the British Isles – and we are indebted to Grosvenor for their generosity in allowing this beautiful, mysterious artefact to remain in Cambridge.

“The Trumpington Cross and other material recovered from the dig are of international quality and significance – but with the strongest connections to Cambridge and the surrounding settlements.

“Taking pride of place in our galleries,the cross will allow us to tell the story of the coming of Christianity to the region and some of the history of this previously unknown Anglo-Saxon settlement – as well as the very early years of the English church after St Augustine was dispatched to England by the Pope in 597AD to convert the pagan Anglo-Saxon kings.” 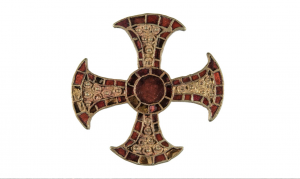 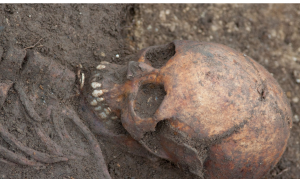 The cross pictured as found by archaeologists during the 2011 dig 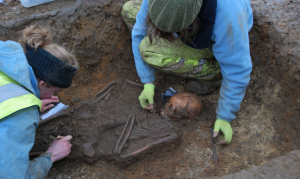 Fashioned from gold and intricately set with cut garnets, the cross would have made a spectacular dress accessory. The gold and garnet construction was reserved for the highest levels of society posing the intriguing question about what position the teenage girl held in her settlement and the wider region.

The bed consisted of a wooden frame held together by metal brackets, with further pieces of looped metal fixing the cross-slats to create a suspended bed base, similar to modern beds, but with a straw mattress. The body was then placed on the bed, probably when it was already in the grave.

The cross and other grave goods from the very rare bed burial will be put on temporary display while a new bespoke display case is created to show off the cross to its full advantage.

The Museum also hopes to host public lectures at which the context and significance of the cross will be explained. 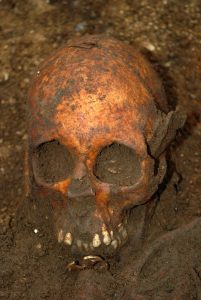 The cross, as seen from the front, during its discovery

“Our ultimate goal is to ensure that the importance of this magnificent and mysterious cross is recognised locally,nationally and internationally through research, exhibition and publication,” added Joy.

“The Trumpington Cross offers unique insights into the origins of English Christianity and we feel very lucky to be able to put it on display at the Museum of Archaeology and Anthropology just a few, short miles away from where this beautiful artefact was discovered.” 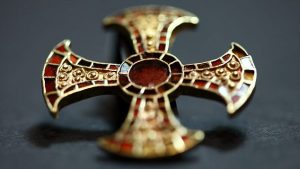 Alex Robinson, Development Director, Grosvenor Britain & Ireland, said: “We were delighted to donate the ‘Trumpington Cross’ to the Museum of Archaeology and Anthropology. Our long-standing commitment to Cambridge and our long-term investment in the growing neighbourhood of Trumpington Meadows demanded no less. The museum’s publicly-available exhibitions are an incredibly effective and moving confirmation of our shared past and our common interest in sustaining a lasting legacy.”

Was this teenage girl an early Christian convert, a standard-bearer for the new God? “Christian conversion began at the top and percolated down,” said Dr Sam Lucy, a specialist in Anglo-Saxon burial from Newnham College, Cambridge.

“To be buried in this elaborate way with such a valuable artefact tells us that this girl was undoubtedly high status, probably nobility or even royalty. This cross is the kind of material culture that was in circulation at the highest level of society. The best known example of the pectoral cross was that found in the coffin of St Cuthbert now in Durham Cathedral.”

“That this is a bed burial is remarkable in itself – the fifteenth ever uncovered in the UK, and only the fourth in the last twenty years – add to that a beautifully made Christian cross and you have a truly astonishing discovery,” said Alison Dickens, who led the excavation for the University’s Archaeological Unit.