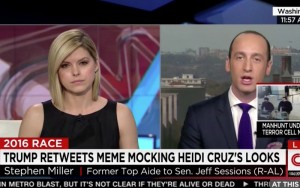 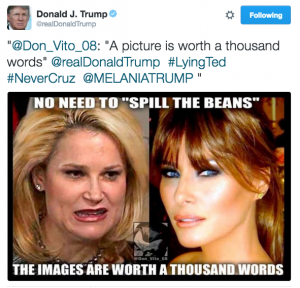 Once again, Mr. “I’ll Be the Best for Women” shows he won’t.  This man’s consistent degradation of women has been abundantly clear.  How the many that do support him live with their conscience is beyond understanding.

Let’s look at what this misogynist has said in the past:

His reputation clearly established, the man just cannot stop himself.  It’s like a disease.

But CNN’s Kate Bolduan took Trump’s campaign spokesman, Stephen Miller, to task and raked him over the coals as he defended (badly) his boss:

This is the team of people that want to occupy the Oval Office and represent our nation to the entire world.  This is the GOP frontrunner, and that doesn’t speak well for the party.

They all need to look in the mirror and ask themselves if they’re willing to sell their souls simply to keep a Democrat out of the White House.