With the amount of data storage required for our daily lives growing and growing, and currently available technology being almost saturated, we’re in desparate need of a new method of data storage. The standard magnetic hard disk drive (HDD) – like what’s probably in your laptop computer – has reached its limit, holding a maximum of a few terabytes. Standard optical disk technologies, like compact disc (CD), digital video disc (DVD) and Blu-ray disc, are restricted by their two-dimensional nature – they just store data in one plane – and also by a physical law called the diffraction limit, based on the wavelength of light, that constrains our ability to focus light to a very small volume.

And then there’s the lifetime of the memory itself to consider. HDDs, as we’ve all experienced in our personal lives, may last only a few years before things start to behave strangely or just fail outright. DVDs and similar media are advertised as having a storage lifetime of hundreds of years. In practice this may be cut down to a few decades, assuming the disk is not rewritable. Rewritable disks degrade on each rewrite.

Without better solutions, we face financial and technological catastrophes as our current storage media reach their limits. How can we store large amounts of data in a way that’s secure for a long time and can be reused or recycled?

In our lab, we’re experimenting with a perhaps unexpected memory material you may even be wearing on your ring finger right now: diamond. On the atomic level, these crystals are extremely orderly – but sometimes defects arise. We’re exploiting these defects as a possible way to store information in three dimensions.

One approach to improving data storage has been to continue in the direction of optical memory, but extend it to multiple dimensions. Instead of writing the data to a surface, write it to a volume; make your bits three-dimensional. The data are still limited by the physical inability to focus light to a very small space, but you now have access to an additional dimension in which to store the data. Some methods also polarize the light, giving you even more dimensions for data storage. However, most of these methods are not rewritable.

Here’s where the diamonds come in. 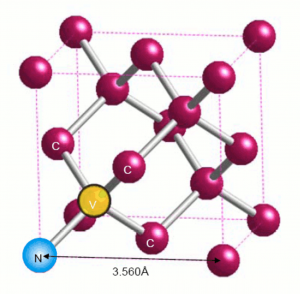 The orderly structure of a diamond, but with a vacancy and a nitrogen replacing two of the carbon atoms. Zas2000

A diamond is supposed to be a pure well-ordered array of carbon atoms. Under an electron microscope it usually looks like a neatly arranged three-dimensional lattice. But occasionally there is a break in the order and a carbon atom is missing. This is what is known as a vacancy. Even further tainting the diamond, sometimes a nitrogen atom will take the place of a carbon atom. When a vacancy and a nitrogen atom are next to each other, the composite defect is called a nitrogen vacancy, or NV, center. These types of defects are always present to some degree, even in natural diamonds. In large concentrations, NV centers can impart a characteristic red color to the diamond that contains them.

This defect is having a huge impact in physics and chemistry right now. Researchers have used it to detect the unique nuclear magnetic resonance signatures of single proteins and are probing it in a variety of cutting-edge quantum mechanical experiments.

Nitrogen vacancy centers have a tendency to trap electrons, but the electron can also be forced out of the defect by a laser pulse. For many researchers, the defects are interesting only when they’re holding on to electrons. So for them, the fact that the defects can release the electrons, too, is a problem.

But in our lab, we instead look at these nitrogen vacancy centers as a potential benefit. We think of each one as a nanoscopic “bit.” If the defect has an extra electron, the bit is a one. If it doesn’t have an extra electron, the bit is a zero. This electron yes/no, on/off, one/zero property opens the door for turning the NV center’s charge state into the basis for using diamonds as a long-term storage medium. 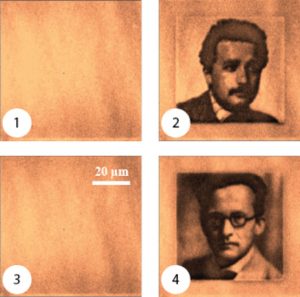 Starting from a blank ensemble of NV centers in a diamond (1), information can be written (2), erased (3), and rewritten (4). Siddharth Dhomkar and Carlos A. Meriles

Turning the defect into a benefit

Previous experiments with this defect have demonstrated some properties that make diamond a good candidate for a memory platform. 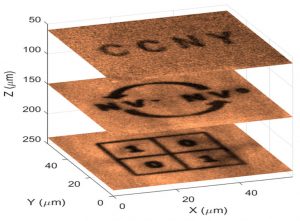 The NV centers can encode data on various levels. Siddharth Dhomkar and Carlos A. Meriles

Our method is still diffraction limited, but is 3-D in the sense that we can charge and discharge the defects at any point inside of the diamond. We also present a sort of fourth dimension. Since the defects are so small and our laser is diffraction limited, we are technically charging and discharging many defects in a single pulse. By varying the duration of the laser pulse in a single region we can control the number of charged NV centers and consequently encode multiple bits of information.

Though one could use natural diamonds for these applications, we use artificially lab-grown diamonds. That way we can efficiently control the concentration of nitrogen vacancy centers in the diamond.

All these improvements add up to about 100 times enhancement in terms of bit density relative to the current DVD technology. That means we can encode all the information from a DVD into a diamond that takes up about one percent of the space.

Past just charge, to spin as well

If we could get beyond the diffraction limit of light, we could improve storage capacities even further. We have one novel proposal on this front. 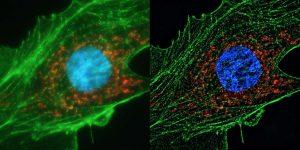 A human cell, imaged on the right with super-resolution microscope. Dr. Muthugapatti Kandasamy

Nitrogen vacancy centers have also been used in the execution of what is called super-resolution microscopy to image things that are much smaller than the wavelength of light. However, since the super-resolution technique works on the same principles of charging and discharging the defect, it will cause unintentional alteration in the pattern that one wants to encode. Therefore, we won’t be able to use it as it is for memory storage application and we’d need to back up the already written data somehow during a read or write step.

Here we propose the idea of what we call charge-to-spin conversion; we temporarily encode the charge state of the defect in the spin state of the defect’s host nitrogen nucleus. Spin is a fundamental property of any elementary particle; it’s similar to its charge, and can be imagined as having a very tiny magnet permanently attached it.

With these advanced protocols, the storage capacity of a diamond would surpass what existing technologies can achieve. This is just a beginning, but these initial results provide us a potential way of storing huge amount of data in a brand new way. We’re looking forward to transform this beautiful quirk of physics into a vastly useful technology.