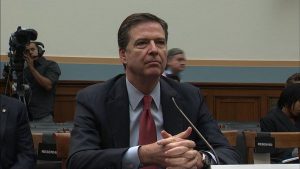 Gaming out the political fallout from the latest FBI letter and the best way to do so is to compare it to the effect of the FBI report in July and to fallout to Trump after the Access Hollywood tape and accusations appeared.

When the email issue first appeared in 2015 Hillary took a big polling hit. It was genuinely new news and her responses to it only made things worse. It really set the baseline for her the entire cycle. When the July Comey report came out she only lost about 2 points nationally, per Nate Silver. But those two points went to undecided and third party before drifting back to her. The damage was done in 2015, not in July.

It seems increasingly likely that Friday’s FBI letter yesterday was little more than a procedural notification with no legal consequences for HRC at all. Considering how late it is in the cycle, how locked in voters are, how many people have already voted, how aggressively her team pushed back, and the over-the-top reactions from Republican leaders, this is likely to have no effect at all. It may motivate Republicans already angry about the email issue and it might help down ballot races as Republicans make the case for “oversight” of a Clinton Administration. But for those who already viewed the email issue as a deal breaker, this changes nothing. And, crucially, for those who didn’t see the email issue as a deal breaker after July, this won’t change anything either.

The Trump groping comments and accusations are a useful political analogy (talking purely about electoral consequences here, not actual severity of the issue). When the Access Hollywood tape dropped, it hit like a bomb. Yes, there were accusations for years that Trump was a serial sexual predator. Those accusations over the years, plus the various other unseemly elements of his past, already reduced his poll numbers in the general electorate. But hearing him brag about grabbing women’s genitalia and in his own words caused a big drop in support for him, especially among reluctant Trump voters.

But then – guess what! – they started to drift back to him, with many buying his excuse that it was just “locker room talk.” And then several women started coming forward with evidence that it was not just locker room talk. Trump called them liars, some softer Trump voters drifted back away from him again, but most just remained silent. Why? Because the longer the campaign goes, the more these issues get baked into the electorate.

In many ways, the FBI letter is like the former Miss Finland accusing Trump of groping her. Both are further reminders to those who already view these issues as deal breakers (among other issues) why they oppose Trump or Clinton. The only difference here might be that we haven’t heard about emails since September so it’s a tad bit “new”. But the quick news cycles and lack of genuinely new incriminating evidence (most likely) pushes it back out of the cycle again in a day or two.

We are back to where we were before this: turnout.

If anything, the real fight will be downballot turnout. As has been the case since last weekend, reluctant Trump voters have been gradually coming back into the fold, and Clinton voters have been voting early. Both candidates are “rising” in the polls, though there has already been a bit of tightening due to Trump’s outrageous comments last weekend about not accepting the election fading from memory.

So it’s get-out-the-vote time from now until November 8. Clinton is still the prohibitive favorite to win barring massive and systemic polling error (three times the level of Brexit). Democrats are still favored to take the Senate. But the margins will depend on the success of turnout operations on both sides.