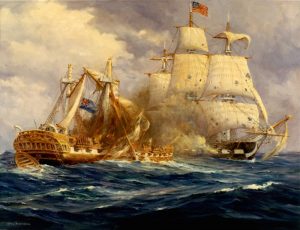 Painting depicting the first victory at sea by USS Constitution over HMS Guerriere, by Anton Otto Fischer / Department of the Navy, Wikimedia Commons

The early development of the U.S. Navy must be considered within the context of the interaction between domestic politics and public diplomacy. 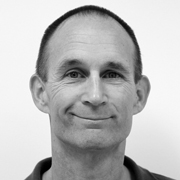 As today’s foremost maritime power, it is misunderstood that Americans have always wanted or needed a powerful navy. Meeting in a waterfront Philadelphia tavern in 1775, the Marine Committee of the Continental Congress, (which included John Adams) formed the Continental Navy, authorizing construction of 13 frigates. Since the British jealously guarded their own shipbuilding industry, the colonists took time developing one that could produce sound and seaworthy vessels.

In the interim, some of the first war ships were simply converted merchant vessels and commissioned privateers. As the Revolutionary War progressed, these makeshift war vessels proved more successful than the Continental Navy’s commissioned ships, most of which were either captured or destroyed by the Royal Navy. Even John Paul Jones’ illustrious Bonhomme Richard, though victorious over HMS Serapis, sank off the coast of England. By the end of the war, only a handful of the estimated 65 ships that served in the Continental Navy survived, and in 1785 Congress auctioned the last vessel of the Continental Navy to a private owner.

The early development of the U.S. Navy must also be considered within the context of the interaction between domestic politics and public diplomacy. Navies, much like standing armies, were, and still are, enormously expensive to build, man, equip, and even more costly to maintain. Following the Revolution, purposeful legislative discussions tended to hit a dead end over funding and taxes—along with concerns over the increased power and authority a Navy might allow a new central government and the nature of the global maritime threat. Though the Federalists and Democratic-Republicans differed on just about everything, one thing they agreed upon was the importance of frugality. As Ian Toll noted in Six Frigates, “even proponents tended to accept the judgment that the federal government, still groaning under the weight of its Revolutionary War debts, could not afford [a Navy].” Possibly informed by the observation of Thucydides, who remarked that “the growth of the power of Athens, and the alarm which this inspired in Lacedaemon, made war inevitable,” early Republic leaders warily measured the risks of inciting the world’s most powerful maritime power of the time, the British Royal Navy, by building a naval presence.

Nevertheless, by the 1790s, post-Revolutionary War America found itself drawn again into European affairs. North African pirates closed off access to lucrative Mediterranean markets by seizing her ships and cargo and enslaving and ransoming the crew. This drove up maritime insurance rates and bankrupted merchant houses, some of which operated out of Philadelphia, which was the seat of government at the time. After some political wrangling, some of it sectional, and some along Federalist-Republican partisan lines, Congress authorized funds to build six frigates in March 1794.

Progress was embarrassingly slow. In one of the earliest instances of “pork barrel politics,” President Washington planned to distribute the building of the six frigates at six separate seaports running up and down the eastern seaboard. Washington wanted to make sure that the nation’s shipbuilding industry was less concentrated; at the time, it was dominated by a handful of Quakers in Philadelphia. One huge challenge for the construction project was the procurement, cutting, and transport of the hundreds of enormous live oak trees from remote places like St. Simon Island, GA that were needed to accommodate shipwright Joshua Humphrey’s design. Many of the contracted New England woodsmen got malaria, and the oxen died from sickness and heat. Secretary of War Henry Knox was tasked with the unfortunate act of repeatedly explaining the delays and cost overruns to Congress.

The French Revolution also effected the development of the U.S. Navy. Americans were deeply divided over the implications of the French Revolution. Some felt that events in France confirmed the strong mutual affinity for revolutionary ideals, while others, social conservatives and Federalists, cast a more wary eye, believing that the Grand Terror proved that too much equality was not necessarily a good thing. Federalists believed that negotiations with Great Britain might serve to stem the wave of pro-French sentiment in Americans. This resulted in the negotiation of the Jay Treaty of 1794 that reestablished commercial ties between the United States and Great Britain. This incensed Republicans at home and France abroad.

In 1795 French privateers captured over 300 merchantmen, and in 1797 French agents demanded a bribe from the American peace commissioners in order to continue peace negotiations. In 1798, President Adams scored political points for the Federalists as he informed Congress of the “XYZ Affair.” By July 1798, Congress rescinded treaties with France marking the beginning of the Quasi-War which spurred a need for naval presence along U.S. trade routes, and to provide protection of U.S. ports.

Meanwhile, the frigates United States, Constellation, and Constitution had been launched, and Benjamin Stoddert assumed duty as the first Secretary of the Navy in June 1798. In February 1799, the frigate Constellation, under the command of Captain Thomas Truxtun, captured the French 36-gun frigate L’Insurgenteoff Nevis Island in the Caribbean. The Quasi-War ended in the fall of 1800 thanks in large measure to President John Adams’s willingness to send a peace delegation to confer with France. Benjamin Stoddert was extremely adept as Secretary of the Navy, and Thomas Truxtun, having trounced the French twice, proved a decidedly capable commander at sea. To the surprise of many, America had begun to establish a fairly respectable naval tradition.

President Jefferson pledged to keep the size and cost of government to a minimum. Through Jefferson’s talented and penny-pinching Treasury Secretary, Albert Gallatin, the goal was to severely reduce ship and manpower strength. But when in October 1801 the Dey of Algiers humiliated the Americans by forcing Captain Bainbridge to convey the Algerian ambassador and his entourage to Constantinople, Jefferson realized that he needed a strong navy to combat Algiers aggression. The Barbary Wars dragged on ineffectually for a number of years, punctuated by the legendary exploits of Navy Lieutenant Stephen Decatur, William Eaton, and Marine Lieutenant Presley O’Bannon (“to the shores of Tripoli”).

Historian William M. Fowler, Jr. suggests that simply paying tribute would have been more cost effective for the frugal Jeffersonians. But of course, wars and national defense rarely operate on such rational terms. With small casualty lists and consistent victories at sea, this was a “good war” in today’s political lexicon, and it captivated and sustained America’s popular imagination and nationalist sentiments over a number of years.

Most military historians would agree that America went to war with Great Britain in part over the principle of “freedom of the seas.” Although the U.S. Army performed poorly in the War of 1812, the performance of the Navy was a notable bright spot. Indeed, some of America’s most renowned naval heroes appeared in popular folklore during this time, including William Bainbridge and Oliver Hazard Perry. By the end of the War of 1812, the United States Navy had established a level of respectability abroad and credibility at home that served to justify its existence and fiscal support in the public’s mind. In his final report before stepping down as Secretary of the Navy, William Jones recommended the establishment of a Naval Academy along the lines of West Point, and expansion of the Navy instead of major cutbacks and mothballing. With this support the U.S. Navy turned an institutional corner in its history. After 40 years of fits and starts, Americans came to recognize the importance of a strong maritime tradition as both an embodiment of national pride and unity and as an instrument for attaining global prestige and power.