Despite assessments that there have been clear violations of international law in the Saudi-led coalition’s war on Yemen, British and American forces continue to supply the coalition with weaponry and help coordinate strikes. 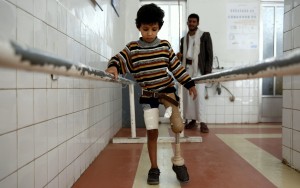 A young boy who lost his leg in the Yemen war uses a prosthetic limb at a government-run rehabilitation center in Sanaa, Yemen, Saturday, March 5, 2016. Yemen’s conflict pits the government, backed by the Saudi-led coalition, against Shiite rebels known as Houthis allied with a former president. Yemen’s war has killed at least 6,200 civilians and injured tens of thousands of Yemenis, and 2.4 million people have been displaced, according to U.N. figures. (AP Photo/Hani Mohammed)

LONDON — As pressure builds for the British and American governments to cut ties with the Saudi-led coalition accused of war crimes in Yemen, an aid worker highlighted the trauma faced by children in an escalating crisis the United Nations has deemed a “humanitarian catastrophe.”

Fatima Al Ajal, who works with Save the Children in the nation’s war-torn capital Sanaa, said that more than 700 children have been killed since last March, and at least another 1,100 have been injured.

According to the U.N. Refugee Agency, 82 percent of the population — 21.2 million Yemenis, including 10 million children — are in urgent need of humanitarian aid.

“If you go round the city of Sanaa you will see many buildings destroyed by airstrikes. Markets, shops, schools and medical facilities have been bombed. Everything is damaged or destroyed by airstrikes or fighting on the ground. We don’t have the basics to survive anymore,” Al Ajal told MintPress during a lull in air attacks in Sanaa.

Airstrikes by coalition warplanes – some of which were built in the United Kingdom and drop Paveway missiles produced in Scotland by American arms firm Raytheon – are constant, and Al Ajal said the noise of jets terrifies youngsters.

She added that many children are suffering psychological problems because of the war and when they hear the noise of a plane they think it is coming to kill them. “These children need urgent treatment. Children are the most vulnerable in this war. They are traumatized,” she said.

On Feb. 29, Save the Children reported that more than 1,500 schools have been forced to close because they were not secure. At least 174 schools have been totally destroyed by airstrikes, and another 611 have been so badly damaged they are unsafe for use. Al Ajal told MintPress that as many as 3 million children aren’t attending school, “because schools are damaged or because they had to leave their homes and are internally displaced persons.” 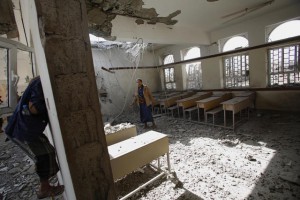 Boys walk around in a classroom at a school damaged by Saudi-led airstrikes in Sanaa, Yemen, Monday, July 20, 2015. The death toll in Yemen from the Shiite rebel shelling of a town near the southern port city of Aden rose on Monday to nearly 100, the head of an international aid group said, describing it as “the worst day” for the city and its surroundings in over three months of fighting. (AP Photo/Hani Mohammed)

With health clinics also targeted by bombs, Al Ajal works with Save the Children to provide food and emergency medical help through mobile health clinics, but she and close relatives – including nine children in her wider family – must move around Sana’a regularly for security reasons.

“I am in one of the hotspot areas just now and bombing is happening everywhere. I expect to lose my life any moment. It’s a nightmare. The last two weeks have been crazy with airstrikes. The bombing even continues at night and many homes have been targeted with people killed. There has been no electricity at times for months and there are no basic services.”

Last summer, the U.K. sold $1.4 billion worth of bombs, missiles and rockets to Saudi Arabia. Sales of these weapons, including Paveway IV missiles, were intended to support Saudi efforts to attack Houthi rebels, who ousted Yemen’s president last March. The Saudi-led coalition of Gulf states trying to reinstate Yemen’s president, Abd-Rabbu Mansour Hadi, is backed by Britain and the U.S., and the Saudis have a fleet of British and American-made fighter jets, including F-15s, Tornados and Eurofighter Typhoons. 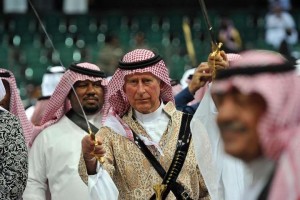 However, British MPs were told recently that 207 civilian structures had been targeted by coalition airstrikes. They included mosques, four Doctors Without Borders (MSF) hospitals and an Oxfam warehouse.

Teresa Sancristóval, head of the Emergency Unit at MSF, told MintPress that Yemen’s civilian population is “paying an extremely high price” during the conflict.

She added that access to health care and humanitarian assistance is severely restricted throughout the country.

“Very few international humanitarian actors are present on the ground despite the needs, and there is an urgent need to scale up,” she said. “MSF is calling on all parties to the conflict to reduce the level of suffering of the Yemeni people.”

The U.N. said there have been clear violations of international law, raising questions over British arms sales and the role of British military advisors supporting the coalition.

Campaigners giving evidence to Westminster’s International Development Committee at the end of January highlighted the paradox of U.K. foreign policy in sending arms to Saudi Arabia while at the same time providing aid on the ground via the government’s Department for International Development. The department admitted to the committee that it had not been consulted over arm sales by ministers.

Despite growing concern, the British government has not only refused to suspend arms exports to Saudi Arabia, it’s also helped Saudi Arabia block an independent inquiry into war crimes by the U.N.

Meanwhile, the Scottish National Party has been calling for the U.K. government to investigate allegations of war crimes.

Patrick Grady, member of Parliament for Glasgow North and shadow Scottish National Party spokesperson on International Development, said in a statement to MintPress: “We continue to hear horror stories from the conflict in Yemen, yet the U.K. government remains unmoved.”

“The government has not been able to explain why the use of U.K.-built planes, with pilots trained by U.K. instructors, dropping bombs made in the U.K. and coordinated by the Saudis in the presence of U.K. military advisers, does not add up to U.K. complicity in this conflict and potentially, therefore, in the war crimes allegedly being perpetrated.”

Grady pointed out that the Belgian government moved to suspend arms sales to Saudi Arabia in light of allegations regarding the conflict in Yemen.

“So it must be possible for the U.K. Government to do so as well,” he said, adding that the SNP would continue to press the U.K. government to suspend arms sales to Saudi Arabia and to launch a full investigation into allegations of war crimes in Yemen.

In response, the Foreign and Commonwealth Office issued a statement to MintPress saying that the U.K. government takes its arms export responsibilities very seriously and operates one of the “most robust arms export control regimes” in the world.

“All export license applications are assessed on a case-by-case basis, and a license will not be issued, for any country, if we assess there is a clear risk that it might be used in the commission of a serious violation of International Humanitarian Law.”

The statement went on to say that the U.K. supports the Saudi-led coalition military intervention which came at the request of President Hadi, and was “satisfied that extant licenses for Saudi Arabia are compliant with the U.K.’s export licensing criteria.”

A spokesperson added that the government’s priority is to help support the conditions for a return of the legitimate government to Yemen through a political process.

“Our humanitarian support is provided on the basis of need, irrespective of the cause,” the FCO continued, adding:

New report highlights use of US-made cluster bombs on Yemenis

At the end of February, Human Rights Watch reported that Saudi Arabia had used U.S.-made cluster bombs on civilians in Yemens.

In its report, Human Rights Watch concluded that the Saudi-led coalition was responsible for all, or nearly all, the cluster munitions attacks in Yemen because it was the only entity operating aircraft capable of delivering the weapon. 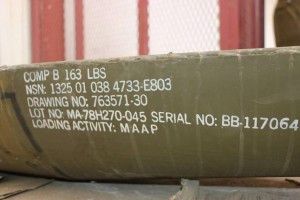 Markings on a remnant of a CBU-58 cluster bomb found near al-Zira`a Street in Sanaa on January 6, 2016 indicating that it was manufactured in 1978 at the Milan Army Ammunition Plant in the US state of Tennessee.
© 2016 Private

Cluster bombs can be legally exported under U.S. law and have been sold to Saudi Arabia and the United Arab Emirates in recent years.

HRW reported that the Saudi-led coalition air-dropped cluster bombs on residential neighborhoods in Sanaa on Jan. 6.

The report noted that each CBU-58 cluster bomb contains 650 submunitions, adding that the U.S. transferred 1,000 CBU-58 bombs to Saudi Arabia sometime between 1970 and 1995, according to U.S. export records obtained by Human Rights Watch.

HRW also reported: “The US is a party to the armed conflict in Yemen, playing a direct role in coordinating military operations, and as such, is obligated to investigate alleged violations of the laws of war in which its forces took part.”

According to a Feb. 29 report by CNN, U.S. officials have acknowledged reports of civilian casualties in Yemen but did not accept direct responsibility for collateral damage resulting from coalition airstrikes.

“We are aware of the Human Rights Watch report and are reviewing it,” Christopher Sherwood, a spokesman for the Department of Defense was quoted as saying.