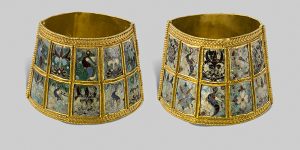 Pair of Wristbands with Birds and Palmettes, Greek, made in Constantinople, 800s–900s. Gold with granulated decoration and enamel, each 3 3/8 in. wide. Image courtesy of the Museum of Byzantine Culture, Thessaloniki, inv. no BKO 262/6

Buried twice over the centuries, a precious gold cuff from Thessaloniki, Greece, is a document of Byzantine history. 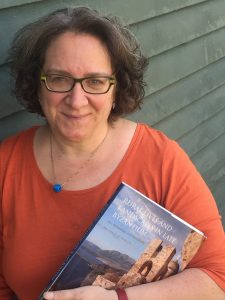 Twice buried and twice revealed, a gold cuff in the exhibition is more than a mere object of art—it embodies the story of a city.

With its mate (shown above), the cuff was found in 1956 in Thessaloniki, Greece, nearly three feet below the ground of Dodecanesos Street, part of the textile district close to the harbor. Buried with the cuffs were two sets of earrings with granulation and pearls, an unusual white glass amulet decorated with red lines and dots, a gold cross that once contained a small relic, and a round gold button. The jewelry may have belonged to a single person, a woman of means who used the cuffs to secure the flared sleeves of her silken gown. 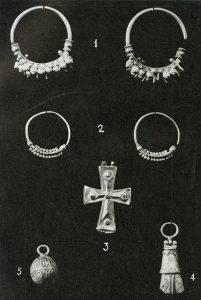 At the time of the cuffs’ creation—the ninth century A.D.—Thessaloniki was a thriving metropolis with a reputation for fine work in gold, silver, precious stones, and silk. The decoration of the dome of Hagia Sophia, the city’s main church, epitomizes the high-caliber mosaic work of the same period. Within the dome, the Virgin Mary wears ornamented cuffs to secure the ends of her sleeves. 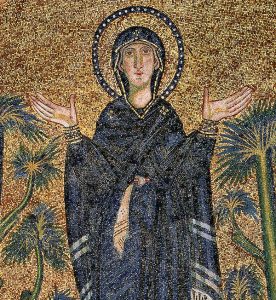 The Virgin Mary wears ornamented cuffs to secure her sleeves in this mosaic in Hagia Sophia. Photo from Mosaics of Thessaloniki: 4th to 14th century, ed. Charalambos Bakirtzis (Athens: 2012)

Despite their value, however, the cuffs were worn for a relatively short time. On July 29, 904, Thessaloniki was ruthlessly attacked by Saracens. The citizens banded together, dismantling ancient tombs to blockade the harbor. Stone taken from the dead, it was thought, would protect the living. At the same time, the wealthy raced to bury their treasures, hoping to wait out the invasion and to reunite, ultimately, with their valuables. In the course of the invasion the city’s residents were ruthlessly murdered, many as they tried to escape through the city gates.

One witness to the massacre, the church lector John Kaminiates, was spared, but only through his wits and wealth. According to his own words, he promised to reveal to his captors the location of his hidden treasures, warning: “if we die, then that is the end of them: they will to all intents and purposes slip out of your hands and cease to be, along with ourselves.”

The hunt for Thessaloniki’s riches continued for ten days and nights: “with the city yielding an abundant harvest of valuables and other costly finery…so that these objects were piled up on top of one another till they lay in heaps as big as mountains and covered all the ground beneath them.” The cuffs were likely two of many treasures hidden when the city was threatened. Its owner never returned to reclaim them.

Centuries after its burial, the treasure of jewelry was found. Whether through discovery or sale, the pair of cuffs fell into the hands of a new owner, who likely appreciated their fine workmanship, but also prized the base value of their gold. We know this because when the Byzantine cuffs and the other jewelry were unearthed in 1956, they were accompanied by dozens of gold ducats from Venice, Austria, and the Netherlands, as well as a large group of Ottoman coins. This group of valuable objects had been assembled nearly 300 years earlier, about 1660, perhaps by a wealthy merchant. 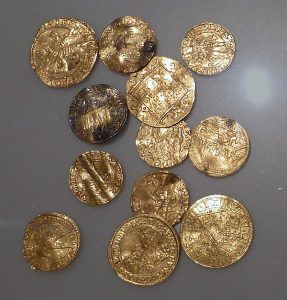 Gold ducats buried with the Byzantine cuffs in the 1600s. Photo: Anastasios Antonaras

At the time they were collected, these coins might have been used to purchase several bolts of expensive silk, a commodity actively traded in Thessaloniki in the 1600s. When the hoard was buried, the city, now called by its Turkish name, Selanik, was only distantly recalled as Byzantine, although it possessed many of the historic monuments that give the modern-day city its Byzantine identity. Under Ottoman rule, the city was demographically rich, with forty-eight Muslim districts, fifty-six Jewish districts, and another sixteen occupied by Christians, Armenians, and others. Dodecanesos Street, the site of the hoard’s discovery, was an important commercial area for the Jewish community. This new context fits the story of the hoard—for it is likely that a wealthy merchant once treasured the cuffs.

We will never know the precise reason for the burial of the cuffs, their associated jewelry, and the coins in the mid-1600s, but we do know that this was a time of upheaval for the city’s Jewish community, which was destabilized by the appearance of the pseudo-Messiah Sabbatai Zvi and faced economic challenges due to loss of trade privileges.

The time between the objects’ second burial in the 1600s and their rediscovery in 1956 marked a difficult period for Thessaloniki. In 1917, much of the lower city was damaged in a conflagration that changed the shape and altered the spirit of the city. Buried below the smoldering ashes and debris of Dodecanesos Street was the treasure, covered by yet another layer of history. Safely hidden, the treasure preserves the story of not one, but two owners who never returned to claim it.