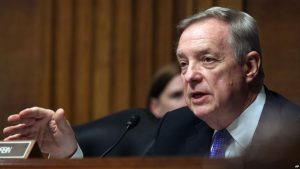 Democratic Senator Dick Durbin (shown) and Republican Senator Rob Portman are co-chairmen of the Senate Ukraine caucus. On Dec. 8, the group called on President-elect Donald Trump to take a tough line against Russia.

A bipartisan group of 27 U.S. senators sent a letter to President-elect Donald Trump on Thursday urging him to take a tough line against Russia over what they termed its “military land grab” in Ukraine.

The letter, whose 12 Republican and 15 Democratic signatories included some leading foreign policy voices from Trump’s Republican party, was an early sign that lawmakers will publicly assert themselves on international matters where they disagree with his White House.

No lifting of sanctions

Trump signaled during his campaign that he might take a softer line in dealings with Moscow, repeatedly praising Russian President Vladimir Putin’s leadership. Putin said recently Trump confirmed to him that he was willing to mend ties.

“In light of Russia’s continued aggression and repeated refusal to respect Ukraine’s territorial integrity and sovereign right to choose its own destiny, we also renew our call for the United States to increase political, economic and military support for Ukraine,” said the letter, led by Senators Richard Durbin, a Democrat, and Rob Portman, a Republican, who are co-chairmen of the Senate Ukraine caucus.

In the letter, seen by Reuters before its public release, the senators also said they believe Russia’s annexation of Crimea should not be accepted and the United States should not lift sanctions imposed on Russia for its behavior in eastern Ukraine. 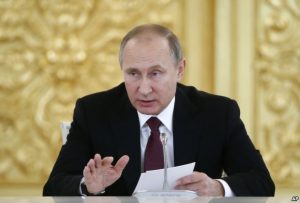 Russia’s President Vladimir Putin delivers a speech during a session of the Council for Civil Society and Human Rights in Moscow, Dec. 8, 2016.

President Barack Obama and Putin have had a challenging relationship, with stark differences over Russia’s actions in Ukraine and Syria. Tensions have risen more with Obama’s Democratic Party in particular over cyber attacks attributed to Russia during the U.S. presidential election.

Among Republican senators who signed the letter were John McCain, chairman of the Senate Armed Services Committee, and Lindsey Graham, head of the appropriations subcommittee that oversees the State Department.

A majority of Republicans and Democrats on the Senate Foreign Relations Committee, including ranking Democrat Ben Cardin, signed the letter. Jack Reed, the top Democrat on Senate Armed Services, also did so.