For most of human history, people have been terrified by lightning. Frightening bolts from above, lightning was a tool of the gods to smite mortals for their hubris (or their unfortunate penchant for seeking shelter from storms under trees). The discovery and implementation of Benjamin Franklin’s lightning rod tamed this once formidable, divine weapon. 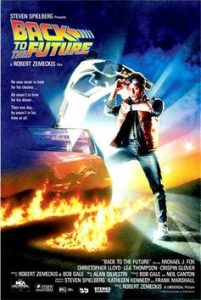 Will a lightning bolt contain enough energy to blast Marty McFly through time?

Nonetheless, lightning’s strength still lingers in our imagination. Hollywood considers it powerful enough to allow strangely designed cars from the early 1980s to break the space-time continuum. In the comic book world, it’s an ingredient in the formula for developing superpowers. It has also been given the power to return life to the dead, though not always with the intended effect.

Just how much energy actually is in a lightning bolt? It may seem like this question should have been definitively answered before, but it turns out it’s difficult to answer quantitatively. In my research, we tackled this issue in a new way: We deduced how big a bolt of lightning was based on the size of rocks formed by lightning.

Lightning is obviously powerful: One need only look at a tree that it’s splintered down the center for proof. Lightning generates temperatures hotter than the surface of the sun, in excess of 20,000 degrees Celsius, a temperature that is otherwise unrelateable to the human experience.

This temperature measurement provides one way to estimate the energy of lightning. It takes a certain amount of energy to heat air to a high temperature. By measuring the length of a lightning strike, multiplying it by the energy per length required to heat up the air to tens of thousands of degrees, we can calculate lightning’s energy.

Alternatively, we can approach the measurement of lightning energy by considering the voltage of a strike. A volt is a measurement of the amount of energy released as each pack of electrons flows from one side of an object to another – for instance, a battery. When lightning strikes, we can determine the voltage it induces on nearby powerlines; measurements range from hundreds of thousands to millions of volts. From Ohm’s law, we can calculate the power of lightning by multiplying this by the number of electrons that move during the strike, a value known as the current. If we know the duration of this strike, we can then calculate the energy.

These methods have a large range of errors: not calculating the length of the lightning strike correctly, or getting the amount of gas heated per length wrong, or the temperature, or voltage, or number of electrons – all give pretty large errors for these calculations.

Could there be another route to calculating lightning energy that might pare down some of these errors? Florida’s unique geology provided an interesting route to answering this question.

Florida tends to be a fairly boring state for a rock enthusiast. There’s sand, and there’s limestone. Not much else, and all of it is young, geologically speaking. Sometimes the sand is on top of the limestone, and sometimes it’s on the side. Sometimes the sand was deposited 15 million years ago, sometimes 5 million years ago. There’s a lot of sand. 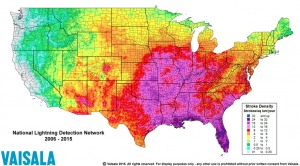 Florida’s weather is a bit more interesting; it’s actually the U.S. state most often struck by lightning. A lot of times this lightning strikes the sand that covers the state. When it does so, it creates a new type of rock, called a fulgurite – a hollow tube formed as the lightning travels through the sand, vaporizing it and melting its outer edges. When the sand cools down, which happens quickly, the hollow tube is frozen in glass, recording the path the lightning traveled. By definition, a fulgurite is a metamorphic rock, changed by heat and pressure, from sand to something new.

Fulgurites are generally rare, unless you know where to look. Central peninsular Florida hosts several sand mines that supply the raw material for roads and cement, golf courses and playgrounds. At one site, we collected several hundred fulgurites; more than 250 lay in the field, with many more found in spoil piles, filtered out of the sand prior to its being loaded onto trucks. 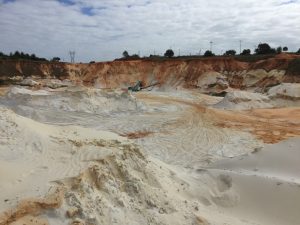 The sand mine in Polk County, Florida, from which the fulgurites were collected. Matthew Pasek

These sites are not really any different than any place else in Florida – they aren’t some sort of lightning magnet – but the geologic setting was just right for keeping them around for a long time. These sand mines probably have about one million year’s worth of fulgurites buried inside of them. They’re easy to find – since glass isn’t something you want in commercial sand, the mine filters them out.

Calculating from the fulgurites

It takes a specific amount of energy to vaporize sand into gas. First the sand has to be heated to around 1700°C, about the temperature of molten lava. At this temperature, the sand melts. The molten sand then has to heat to just shy of 3000°C, when it vaporizes. It takes about 15 megajoules of energy to heat and vaporize a kilogram of sand. That’s about the amount of energy the average U.S. household consumes in six hours, or the kinetic energy an average car would have if it were going 300 miles per hour. 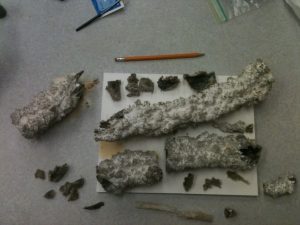 The largest fulgurite found during recovery at the sand mine. Matt Pasek

After measuring our fulgurites, we determined that on average, the energy required to form these rocks was at least about one megajoule per meter of fulgurite formed. We calculated the energy per meter since, again in most cases, the fulgurites we had collected were broken.

So based on our calculations, how close does Hollywood come, with estimates like in “Back to the Future” of 1.21 gigawatts of power in lightning? Power is energy per time, and our measurements of fulgurites suggest that megajoules of energy make rock in thousandths to millionths of seconds. So a gigawatt is actually on the low side – lightning power may be a thousand times that, reaching into the terawatts, though the average is probably tens of gigawatts.

That’s enough energy to power about a billion houses, albeit only for a few millionths of a second. Unfortunately, given its sporadic and unpredictable nature, no power grid will ever be able to harness lightning effectively. But with that much power, perhaps breaking the space-time continuum in a souped-up Delorean is not so unfeasible after all….

An oddity in the pattern

When we looked at these fulgurites in depth, something odd came out of the data. Our energy measurements followed something called a “lognormal” trend.

Rather than following the bell curve we often see in the distribution of natural phenomena – like, for instance, the heights of American men – the energy curve was less equally balanced. For heights, the same number of men are two inches above average as are two inches below. But for lightning, the large lightning strikes were much larger than the average, while the smaller strikes were not so much smaller than the average. Strikes that were twice the average were as frequent as those that were half the average.

Now why might this be at all interesting or useful? Measuring the energy in lightning is a way of measuring potential damage: A lightning strike can vaporize rock, so what might it do to wood or electronics? Our measurements show that the biggest lightning strikes are multiples of the average lightning strikes: A big one might be 20 times as large as the average. That’s a lot for a lightning protection system to handle. The peak energy calculated from our rock-based method may give an idea as to the maximum damage we may expect, and may eventually allow for better preparation against the worst-case scenario.