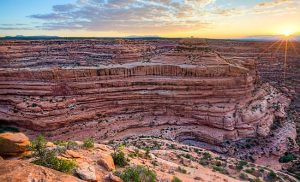 By permanently protecting an area rich in indigenous cultural history, Obama has shown that some things are worth more than money.

On Dec. 28, with only 22 days left in office, President Obama set aside nearly 1.35 million acres in southeastern Utah’s San Juan County as the Bears Ears National Monument. The announcement capped several years of work by a unique tribal coalition that proposed this first-in-the-nation monument to be comanaged by tribes and the federal government. Obama also designated 300,000 acres at Gold Butte in Nevada, homelands of the Paiute people, ironically, near militant rancher Cliven Bundy’s cattle operation.

The national monument—proposed by the Bears Ears Inter-tribal Coalition, which includes the Navajo Nation, the Pueblo of Zuni, the Ute Mountain Ute, Ute tribe, and Hopi tribe—will preserve an area rich in biodiversity and human history amid one of the country’s most iconic landscapes. It, and the political battle that continues to stem from it, also raises a greater question for a nation at odds with itself: What is the value of land?

This is at the heart of land disputes from the Malheur Wildlife Refuge in Oregon to the Standing Rock Sioux Reservation in North Dakota. Does the value of unspoiled wildness, the cultural heritage of indigenous people, and their ancestral connection to the land outweigh the exploitation of oil, coal, timber, grassland, and water to create wealth?

“Every time I hear something new and great, like the rediscovery of a bean species or something our ancestors learned to grow during a great drought historically, [I know] we wouldn’t make those discoveries if it all gets destroyed and thrown in a pile of rubbish,” said Regina Lopez-Whiteskunk, Ute Mountain Ute tribal councilwoman and coalition chairwoman. “It takes a page out of our history,” she said.

The name Bears Ears—called the same in the languages of each of the regional tribes—refers to a pair of red sandstone buttes that rise 2,000 feet above juniper-covered Cedar Mesa. The surrounding area encompasses some 100,000 culturally significant sites, including cliff dwellings, burial sites, and ancient roads that span thousands of years of human history.

Like the Fertile Crescent of the Middle East, Bears Ears has served as a nursery for many cultures in the Southwest and holds ancient remains dating back as much as 13,000 years. Examples include the stunning House on Fire and Moon House, built by Ancestral Puebloans around 800 years ago. These stone towers and multilevel cliff houses, as well as the more humble remains of early Navajo hogans, display the incredible ingenuity that this unique landscape has fostered. For Navajo people, Bears Ears also holds significance as the birthplace of the great 19th century Navajo leader Chief Manuelito, who led a resistance against the forced removal of his people. 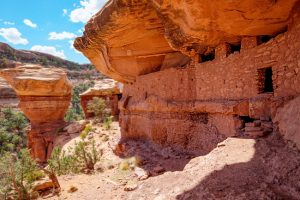 Today, these sites are under threat of looting and destruction. Global positioning systems and social media sharing have made visible places that were previously only known to a few. All of the 1.35 million acres now protected were previously public lands owned by the American people and managed by the Bureau of Land Management. However, without the national monument designation, the BLM could afford only two law enforcement officers to patrol it. Under so little oversight, entire petroglyphs had been cut from canyon walls and trucked away.

In 2014, San Juan County Commissioner Phil Lyman joined forces with Ryan Bundy, son of Nevada rancher Cliven Bundy, to conduct an illegal, armed ATV ride over an ancient Puebloan village in Recapture Canyon, now within the monument’s boundaries. The rally, about which Lyman expressed last minute apprehension to the gathered crowd of sagebrush militia and local media, was staged to protest the government’s closure of a road to protect ancient artifacts and graves. Lyman was later convicted of two federal misdemeanors, fined, and sentenced to 10 days in jail.

But in San Juan County, hostility toward Native Americans has not been isolated to historical sites. In early 2016, the Navajo Nation sued the county for violations of the Voting Rights Act. A U.S. district court sided with the Navajo, finding that “the county had race-based motives” in how it gerrymandered Navajo voters into a single district to prevent them from asserting influence over the county. The lawsuit included statements made by Lyman telling Navajos they had “lost the war” and had no right to comment on public land management.

In July, U.S. Reps. Rob Bishop, R-Utah, and Jason Chaffetz, R-Utah, introduced to Congress the Public Lands Initiative Bill as an alternative to the Inter-Tribal Coalition’s national monument proposal. Their bill not only proposed removing protections of 18 million acres of federal land in Utah, but also sought to take 100,000 acres of land from the Ute tribe and open it up to oil and mining companies without tribal consultation.

Ute leaders including Lopez-Whiteskunk said that Bishop and Chaffetz never mentioned this audacious land grab, written into a bill designed to protect Bears Ears, to the tribes. This disrespect is echoed at not only the county level of Utah government but also at the state.

“I was very, very shocked by the way I was treated by the Utah Legislature,” Lopez-Whiteskunk said. “I felt belittled and disrespected because the legislature, the committee cut me off … I didn’t respond back in a negative manner. But it left me feeling very disrespected as a tribal leader.”

This lack of respect at the local level forced the Bears Ears Inter-Tribal Coalition to turn to Obama and seek national monument designation for lands that hold both historical and future potential for the five tribes. 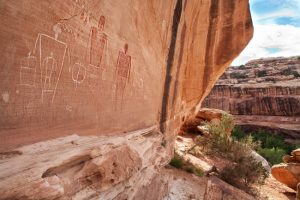 “What we are seeking to do with the Bears Ears National Monument is to stabilize our community and to bring the youth back to the reality of the natural world,” said Willie Grey Eyes, Diné elder, president of the Utah Diné Bikeyah, and former tribal councilman. “We want to teach them how to utilize these resources in a way that not only benefits them in their pocket, but spirituality … This circle of relationships continues a cycle where the youth know how to protect these natural resources and how to utilize it in a sustainable way.”

This desire for harmony—called Hózho in Navajo—has been met with threats of violence. In an interview with the Washington Post in June, Sen. Orrin Hatch, R-Utah, warned, “I would hope that my fellow Utahans would not use violence, but there are some deeply held positions that cannot just be ignored.”

And yet, contrary to how Hatch may characterize his constituents, a clear majority of Utah voters supported protecting Bears Ears as a national monument in a 2016 survey commissioned by the Pew Charitable Trusts.

Despite this, newly minted Utah Attorney General Sean Rayes said he plans to file a lawsuit to fight what some view as an overreach of presidential power. Echoing this concern, a crowd of hundreds gathered in Monticello on Dec. 29 to protest the designation, calling on President-elect Trump to undo the decision. Previous courts, however, have upheld the Antiquities Act.

A glance west across the Colorado River may offer some insight into how these battles have played out previously. The Grand Staircase-Escalante National Monument was controversial when it was designated under the same authority by then-President Bill Clinton in 1996. By 2008, job opportunities in the surrounding counties had grown by 38 percent, per capita income by 30 percent; Utahans now consider the designation to be a good thing for the state by a margin of more than 2 to 1.

Had Escalante’s 1.8 million acres of unspoiled natural beauty been rolled over for resource extraction, scientists may not have discovered the tens of thousands of dinosaur fossils, 46 previously unidentified species of bees, or the ancient Anasazi sites that it holds.

This is at the heart of the unique monument proposal brought forward by five Native American nations, indigenous grassroots community members, and environmentalists. What worth does the past hold? Is there more value in mining, a quick dollar, and the right to ride an ATV unbounded?

This is the question Obama heard at Bears Ears and Gold Butte. Although Native Americans are still waiting to hear what will happen at Standing Rock and face the prospect of a combative Trump presidency, in this moment we can see an America where the future, the past, and the land are in harmony.