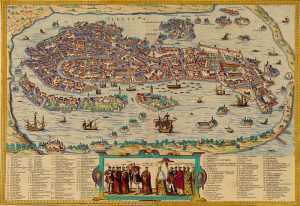 The ‘Dark Ages’ were not always dark. It depends on the context and the country itself. Venice, also known as the “City of Canals”, actually prospered during the Dark Ages, then faced some setbacks during the Renaissance period when it lost some territories and faced competition in trade, before being defeated by Napoleon in 1797. Just like Singapore, the Republic of Venice (as it was known during its heyday) is a city-state. Although Venice is about half the size of Singapore, yet it had a great maritime power and a flourishing arts scene.

Venice was founded in the 5th century A.D. and comprises of 118 islands. when barbarians from the north such as the Germanic and the Huns, attacked the former territories of Rome. In order to escape these attacks, the inhabitants of Roman cities near the coast escaped to the nearby, low-lying islands in the Adriatic, such as Torcello, Jesolo and Malamocco. These islands were protected by the sea, and the people also had access in their boats and barges to the river mouths that led to inland cities. During that period, Venetians were mainly peasants or fishermen.

Venice’s place on the Adriatic Sea made it possible for it to develop a strong and nearly unbeatable naval force and trade systems with other city states and countries. This navy eradicated pirates along the east coast of the Adriatic, making Venice into one of the most flourishing trade cities on the Mediterranean between Western Europe and the growing Ottoman empire.

In 1081 CE, the Normans tried to besiege the city of Durazzo. The Byzantium Emperor, Alexius I Comnenus, sought help from the Venetians, which the Venetians managed to defeat the Normans at sea by shooting missiles and throwing stones at the Normans in order to capsize their ships. In 1082 CE, Alexius I thus rewarded the Venetians with a Golden Bull for their victory. This allowed the Venetians to be exempted from tolls and tariffs in the Byzantium Empire. They could also enter and leave all Byzantium ports and transfer cargo for free in cities such as Durazzo and Constantinople. The Venetians were also allowed to maintain commercial docks and warehouses at Constantinople. As such, Venetians had an advantage over other nations in terms of trade and commerce.

Before the 13th century, the Republic of Venice conquered many territories mainly for trade reasons; they needed raw materials to manufacture items and also to gain easier access to overland trade routes. By the end of the 13th century, Venice had conquered some territories to the north and many islands in the Aegean and Adriatic seas such as Crete and Cyprus.

Venice was involved in the trade of glass, silk, spices, sugar, book production, and other goods with Asia and Europe. However, Venice’s trade was later impacted by Portuguese production of sugar and spices, and also trade restrictions imposed by the Ottoman Empire. 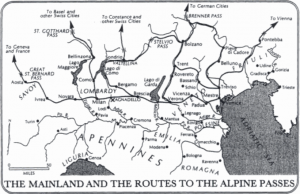 However, in 1347, Venice was hit by the plague. The Great Council of Venice tried to minimise damage by closing down the city’s waters, isolating incoming ships, until they could be certain that its passengers were healthy, and affected victims were quarantined on an island, Lazzaretto Vecchio, Still, 60% of the population died within an 18 month period (p. 48).

Despite being hit by the plague, facing competition in trade, and losing and gaining some territories over the next few centuries, trade such as glass was still exported to Germany, Dalmatia and other places (p. 175). Venetian art and music also started to flourish during the Renaissance.

Glass that is made on the Venetian island of Murano are highly prized and contributed to Venice’s economy. As such, glassmaking techniques were closely guarded and were only restricted to the elite (p. 176), and glassmakers held a high status in society (p. 144). The glass furnaces are on the island of Murano instead of Venice itself because in 1291, the Great Council feared that a fire would occur and cause destruction to Venice. Hence, they ordered all glass production to occur on Murano (p. 175).

Women were not allowed to be master glassmakers not only because it was a high status job, but also because glassmakers are usually assisted by male apprentices. To allow males to be subordinate to female glassmakers would mean a threat to gender hierarchy. Instead, women tend to be involved in bead manufacturing or stringing (p. 144).

Since this happened after the Dark Ages, I’ll just provide a brief explanation.

Due to venice’s location as a cluster of islands away from the mainland, the Art and Music that developed in Venice is so distinct from other places that it is called “Venetian School”. 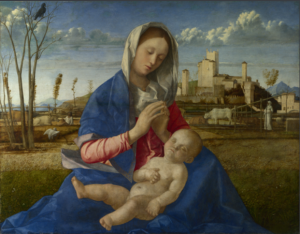 The Bellini family: Jacopo, the father, Giovanni and Gentile, his sons, and Andrea Mantegna, a brother-in-law, are the most prominent painters during the Renaissance in Venice.

Venetian painters make use of oil and expensive pigments to achieve paintings that have subtle gradation in colour and can reflect light. The Venetian School later influenced Spanish art, especially in the area of colors.

Music also started to grow and become an art form that is unique to Venice, such as the Polychoral style. It started when, in the 1540s, Adrian Willaert, a composer and choirmaster of St. Mark’s Cathedral, wrote antiphonal music where opposing choirs would sing successive, often contrasting phrases of the music. By placing choral members in various positions across the chapel, the Venice choirs created the first ‘surround sound’ experience.