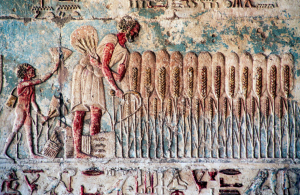 Harvest scene from the Ptolemaic tomb of Petosiris

A study comparing eruptions and uprisings looks at how volcanoes meddle with annual Nile floods.

ome of the most well-known characters in ancient Egyptian history were actually Macedonian. In particular, the Ptolemaic Kingdom, a dynasty founded after the death of Alexander the Great by his general Ptolemy I Soter, which began in 305 B.C. and continued until Rome’s conquest of Egypt in 30 B.C. during the reign of Cleopatra VII. It was a time of great cultural sophistication spawning such thinkers as Euclid and Archimedes, and the Great Library at Alexandria, which aspired to house a copy of every book in the world.  At the same time, the Ptolemaic Dynasty was also known for isolated, inept rulers spawning a period of political instability, civil war and revolts in Egypt. But Craig Welch at National Geographic reports that there may have been more at play than just poor leadership. New research shows that volcanic eruptions half a world away may have impacted Egypt’s climate, leading to social unrest.

According to a press release, from its very beginnings, about 5,100 years ago, ancient Egyptian society was reliant on summer monsoon rains in Ethiopia that caused the river Nile to flood, allowing a narrow band of agriculture along its banks. According to Welch, Yale historian Joe Manning and Francis Ludlow, a climate historian at Trinity College in Dublin were looking at ice-core data of eruption dates collected in Greenland and Antarctica. It struck Manning, an expert on the Ptolemaic dynasty, that some of those eruptions corresponded with uprisings in Egypt, which usually happened one or two years after the massive eruption. The research appears in the journal Nature Communications.

Nicholas St. Fleur at The New York Times reports that the researchers believe these massive eruptions may have suppressed the annual monsoon rains, preventing the Nile from flooding, leading to poor harvests in Egypt. That in turn could have easily led to civil unrest. And it wasn’t a rare event—volcanoes were particularly active during the Ptolemaic era. “They might have been dealing with two or even three huge volcanic eruptions occurring in a given decade,” Ludlow tells St. Fleur. “They were unfortunate. They were living in a period where the Nile had extra variability because of these eruptions.”

According to the press release, the volcanoes injected sulfurous gases into the stratosphere. Those gases react to form aerosol particles that reflect solar radiation into space, producing a cooling effect on Earth. Without that extra heat from the sun causing evaporation, rainfall is reduced, and if that happened primarily in the northern hemisphere, it could more or less stop the monsoon winds that pushed rain to the headwaters of the Nile.

While in some cases rulers were able to ration stored grain to hungry citizens, if a volcanic eruption was strong enough, it could impact agriculture for several years in a row. “We guess there was a lot of fear when the Egyptians see the Nile not flooding that year,” Manning tells St. Fleur. “There was fear about what’s going to happen. ‘Are we going to starve like last time when there was no flood three years in a row?’”

To support their claim, the researchers also looked at records of the Islamic Nilometer, a measuring device in Cairo that kept track of the river’s flooding from 622 A.D. to 1902 A.D. The researchers compared the 60 major volcanic eruptions that occurred during that period to the flood data, finding that during eruption years the flood levels were on average nine inches lower than average.

Kevin Anchukaitis, a paleoclimatologist at the University of Arizona not affiliated with the study, tells St. Fleur that the research does not take certain factors into account like the effects of El Niño. He also observes that the Nile River’s dispersion in flooding during eruption years is relatively small. Ludlow, however, points out that the amount is consistently lower after eruptions, and a larger dip occurred in parallel with larger explosions.

Within two years of an eruption, eight out of the ten largest revolts in Ptolemaic Egypt occurred, according to the study’s ice-core data​. The largest, the 20-year Theban revolt, began in 207 B.C., two years after a major eruption. During the reign of Cleopatra VII, the final years of the Ptolemies, the authors report that there were two massive eruptions in 46 B.C. and 44 B.C. that led to agriculture failures, though Cleopatra’s stockpiling of grain “could reflect short-term coping efforts,” the authors tell Welch of National Geographic​. Still, by the end of her reign, the authors write, Egypt was suffering “famine, plague, inflation, administrative corruption, rural depopulation, migration and land abandonment.”

The conquering Romans lucked out as the following two centuries had little major volcanic activity, reports Welch. That’s similar to our own last century, which comparably has had few climate-disrupting eruptions. However, the authors caution that 70 percent of the world’s population lives off of agriculture that is still dependent on monsoon rains. Another round of increased eruptions could cause drought and chaos in our own historical period.