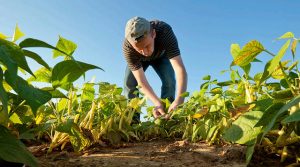 The documentary Occupy the Farm shows the positive impact universities could have if they leveraged their resources to create more farms and farmers.

On Earth Day 2012, a group of University of California, Berkeley, students, former students, and other community members marched to the padlocked gates of UC Berkeley’s Gill Tract carrying shovels, protest signs, seedlings, and hay bales. A small marching band kept time, and someone, it seems, remembered to bring bolt cutters. The Gill Tract, a relatively small piece of land, was about to be the setting for a months-long battle.

This is the scene captured by the documentary film Occupy the Farm, which follows the battle for the Gill Tract, beginning with the Earth Day march and occupation of the farm and ending with a pivotal city-zoning meeting several months later. In the interim, more than 15,000 seedlings were planted and 2,000 pounds of produce were harvested by community organizers, many of whom set up camp at the Gill Tract in order to assert their right to the space and prevent police and campus authorities from reclaiming the land.

A 14-acre patch of green edged by city streets and a few palm trees (the film calls it a 20-acre plot, potentially including other land in the estimate), the Gill Tract, in the eyes of the marchers and the filmmakers, is a once and future farm, one of the last arable plots in the East Bay. In the eyes of UC Berkeley administrators, the tract is a piece of university capital: valuable for agricultural research but also as the future site of a grocery store and a senior housing development, the profits from which could help close a budget gap left by state funding cuts.

What isn’t discussed directly in the film is how instrumental university farms could be in closing another critical gap: America’s young farmer shortage. According to the USDA Census of Agriculture, over the next 25 years two-thirds of all farmland will need a new farmer and only 6 percent of farmers are under the age of 35. The organization I work for, the National Young Farmers Coalition (NYFC), has a goal of 25,000 new young farmers by 2022. But where will these young farmers come from?

My father is a farmer on the plains of Oklahoma, as is his father, as was his father before him. For generations, farming was a largely inherited profession, but in the middle of the last century, the world began to shift. Bigger and better machinery made it easier to plow more acres and milk more cows with less help—my family has a newspaper clipping showing my grandfather in his new milking parlor, waiting for the first bolts of electricity that would change his business forever. Sons and daughters, no longer essential labor, were sent to college. Some of them, like my father and uncle, went to study agriculture with the intention of returning to the farm, while others left the farm for good.

Today, however, another shift is taking place. College is, famously, a time for exploration, and more and more young people are using their undergraduate years to experiment with farming. Many of the young farmers in NYFC say they first got their hands in the dirt while they were in college. Drawn to the idea of public service and working with their hands, some campus farmers decide to make farming their careers.

Some universities do have successful farms (ranging from just a quarter-acre to more than 800 acres) that provide hands-on learning experiences, beneficial even for those who don’t grow up to be farmers. But many university farms are far from robust at a time when agriculture and education are increasingly reliant on each other. Farming is a more demanding field than ever before, requiring knowledge of soil and animal science, as well as marketing, business management, and engineering. To fix farm machinery in the 1980s, my father needed to understand diesel mechanics and hydraulics; those skills are still relevant today, but drones and a host of complex sensors and tracking apps have also entered the scene. More than ever, we need universities that can both recruit new farmers to the field and educate them well.

Universities should have farms for the same reason they have concert halls and lecture series: to give students a chance to expand their horizons, discover new passions, and enrich the quality of their overall education. Not everyone who attends a piano recital becomes a musician, and not everyone who visits a campus farm will become a farmer, but some will.

Occupy the Farm shows how hungry students and communities are (literally and figuratively) for urban farming opportunities and the positive impact universities could have if they leveraged their resources to create more farms and farmers. Although commercial development is currently moving forward on the south half of the Gill Tract, the north half is home to agricultural research plots, as well as the 1.5-acre UC Gill Tract Community Farm, now 3 years old. Last year, more than 1,300 volunteers worked at the farm, producing 15,500 pounds of produce. With any luck, a few career farmers sprouted as well.