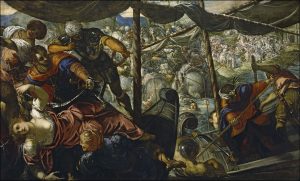 The Rape of Helen by Tintoretto (1578–1579, Museo del Prado, Madrid); Helen languishes in the corner of a land-sea battle scene. / Wikimedia Commons 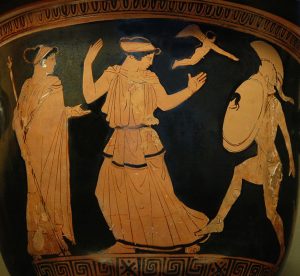 The legend of Troy is one of the oldest stories ever told, but reached a new audience through Wolfgang Petersen’s 2004 Hollywood epic Troy. The film is a loose adaptation of Homer’s ancient Greek poem the Iliad, and it covers the main events of the Trojan War. It is a story brimming with heroic warriors – Achilles, Hector, Patroclus – men who outperform all others on the battlefield. Their reward for this prowess is eternal glory – the term used by Homer is kleos.

But not all are deserving of this kind of everlasting fame. Near the beginning of the tale, the Trojan prince Paris falls in love with the Spartan queen Helen, who is married to King Menelaus. The couple steal away to Troy, where they are cautiously welcomed by Troy’s ruler, Priam. As the plot unfolds, Helen remains an elusive presence at Troy, as the different Greek kingdoms come to demand her return to Menelaus. The outcome of her adulterous relationship with Paris hardly needs to be repeated here: a ten-year war and the annihilation of the city of Troy.

The question of Helen’s involvement in such a significant conflict clearly poses difficult questions – and has done ever since the age of Homer. In the Iliad, the cause of the war is ambiguous. Homer offers listeners (the poem would have been performed orally) no easy explanation as to why the Greeks were willing to participate in such a lengthy conflict. While Helen repeatedly acknowledges her role in igniting the conflict, other characters, such as Priam, refuse to blame her. The Greek gods – who are accused of staging this great conflict – and the Trojan prince Paris are also held responsible.

In later Greek history, many authors responded in different ways to the question of Helen’s role in the war. In some parts of Greece, she was revered as a goddess. Indeed, the early stories are extremely vague but the poet Stesichorus, who lived around 600BC, purportedly slandered Helen – and was struck blind after doing so. The story goes that he recovered his sight after he denied that Helen ever went to Troy. Instead, he rather colourfully suggested that it was a “phantom” of Helen that eloped there.

Around 150 years later, the so-called “father of history”, Herodotus of Halicarnassus, also highlighted the strange role played by Helen in the war. He quoted an ostensibly Persian informant to underscore the flimsiness of the Greeks’ claim, suggesting it was unusual at the time for great powers to opt for the nuclear option over the loss of a woman. According to this source:

The people of Asia made no matter of the seizure of their women. The Greeks, however, for the sake of [Helen], recruited a great army, then came to Asia, and destroyed the power of Priam.

Helen through the ages

Beyond antiquity, many have continued to struggle with the enigmatic Helen. She reappears, for example, on the Elizabethan stage, famously labelled as “the face that launch’d a thousand ships” in Christopher Marlowe’s Doctor Faustus (1604). And in Shakespeare’s Troilus and Cressida (c.1602), she is imagined as an insipid dunderhead, thoroughly responsible for the loss of Greek lives. Indeed, the Greek commander Diomedes states: “For every scruple / of her contaminated carrion weight, / A Troyan hath been slain”. 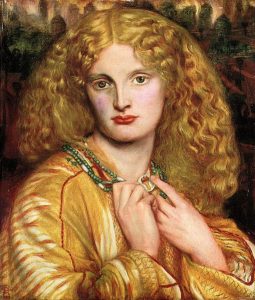 As these cases illustrate, Helen’s unenviable status as an instigator of war colours many later receptions of Homer’s story. Dante Gabriel Rossetti’s 1863 painting Helen of Troy is another striking example. In many ways, the painting focuses on the image of Helen as an impossibly beautiful mortal. Her hair is golden, and she is draped in elaborately decorated apparel.

Upon closer inspection, however, viewers will see that Helen has a purpled left cheek. Is this perhaps an indication of an abusive relationship with her new Trojan “husband” Paris? Is Rossetti suggesting that Paris struck his new bride, stealing her away by force?

Helen is also depicted, however, before a blazing city, while pointing to a locket that depicts a flaming torch. She appears to be saying that it is she who is responsible for this conflagration. Indeed, inscribed damningly on the reverse of the painting is a verse taken from Aeschylus’ Greek tragedy Agamemnon, another of the Greek leaders at Troy. The line runs: “Helen of Troy, ἑλέναυς, ἑλανδρος, ἑλέπτολις.” That is, “Helen of Troy, destroyer of ships, destroyer of men, destroyer of cities.”

It is worth bearing in mind that Helen is not always envisioned as a guilty, destructive force. Take, for instance, Derek Walcott’s Caribbean Helen in his 1990 poem Omeros. Walcott’s tale of migration is a radical rereading of Homer’s text, offering a fresh perspective on this iconic female figure. No longer is Helen cast as a figure of blame; “she was not a cause or a cloud, only a name / for a local wonder”.

The majority of responses to Helen since the Iliad nonetheless have centred on the issue of her culpability. As the film Troy shows, Trojan War narratives still tend to pivot on Helen and her tempestuous romance with Paris. This, of course, fits into a much wider historical picture, in which women and their bodies have been used as a trope through which to explore issues such as warfare, violence and temptation – in some ways, she is another Eve, a temptress who led the great men of the day astray and set the Near East on fire.

There have been echoes of this throughout time, from medieval witches being blamed – and burned – for corrupting society to the recent debate over the burkini ban in France. Indeed, the latter is just another telling case of society continuing to regulate women’s bodies, and crude stereotypes about oppressed women.

In succumbing to the narrative of Helen and her role in the bloodshed, we also miss the opportunity to explore more fruitful lines of inquiry. For Helen’s story is one that should lead us to question why it is that women have so often been made scapegoats in times of warfare, crisis and great political change. Only then might we break free from the question of whether or not Helen was to blame for the Trojan War – and start asking what role the men who carried the swords and spears played.