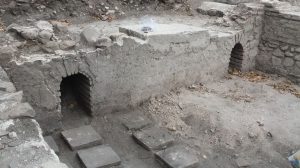 A rich Roman villa from the 3rd – 4th century AD has been discovered some 30 km away from the major Roman city of Augusta Traiana, near Bulgaria’s Gurkovo. Photos: Radio Stara Zagora

A rich Ancient Roman mansion from the 3rd – 4th century AD has been discovered near the town of Gurkovo in Eastern Bulgaria, some 29 kilometers (18 miles) from the major Roman city of Augusta Traiana in today’s Stara Zagora, by archaeologists who followed up on treasure hunters’ digs.

The Ancient Roman city of Ulpia Augusta Traiana was probably founded ca. 107 AD by Roman Emperor Trajan (r. 98-117 AD) (after whom it was named) on the site of a previously existing Ancient Thracian settlement called Beroe. (Some recent research indicates it might have been founded by Trajan’s successor, Emperor Hadrian (r. 117-138 AD).) It quickly became the second most important city in the Roman province of Thracia (Thrace) after Philipopolis (Trimontium), today’s Plovdiv.

In the latest excavations of Augusta Traiana in downtown Stara Zagora, the archaeologists have discovered a total of 27 graves from an Antiquity necropolis, including one masonry tomb with murals.

The rich Roman home near Gurkovo has been discovered by an archaeological team led by Mariya Kamisheva from the Stara Zagora Regional Museum of History, who is also the lead researcher for the city of Augusta Traiana.

The site of the provincial Roman mansion has been discovered after it was attacked by treasure hunters, not unlike countless other invaluable archaeological sites all across Bulgaria.

The archaeologists have been especially surprised by the discovery of the large and well preserved Roman pool. 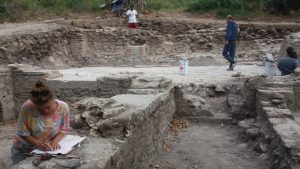 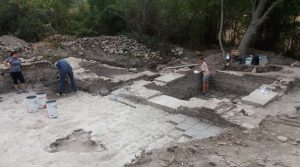 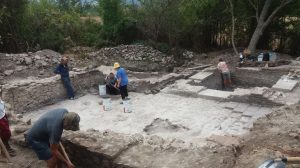 “Gurkovo Municipality has decided that this site has cultural tourism potential, and it has funded the excavations of a ditch dug up by treasure hunters,” lead archaeologist Kamisheva has told Radio Stara Zagora.

The Roman villa boasts hypocaust, i.e. underfloor heating, and has traces of murals, which indicate that the mansion belonged to a rich Roman.

“Our surprise was great because it has turned out that we have come across a pool with a semi-circular shape, and a diameter of 4.04 meters. Its walls have been preserved to a great height of up to 1.4 meters,” she explains.

Kamisheva notes that for the time being her team has not found a large amount of archaeological artifacts but they have first come across the Roman mansion’s bath.

“For the time being, I can say that the Roman villa existed in the 3rd – 4th century AD. We have less [dating] material because we have stumbled upon the bath of the respective building,” she says.

Her team has found two Roman coins from the beginning of the 4th century AD, and an Ottoman Turkish coin from a later period which “might signify the time when the building was partly destroyed.”

The rescue excavations of the Roman mansion near Bulgaria’s Gurkovo have been funded with BGN 8,000 (appr. EUR 4,000) by Gurkovo Municipality. Additional BGN 2,000 (appr. EUR 1,000) by the Bulgarian Ministry of Culture have been used to fund a geophysical survey of the said and the adjacent terrain.

The excavations of the Ancient Roman mansion near Gurkovo in Eastern Bulgaria are set to continue in the summer of 2018. 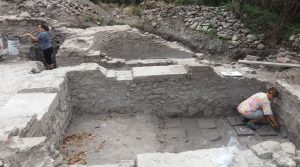 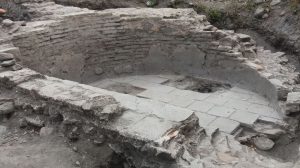 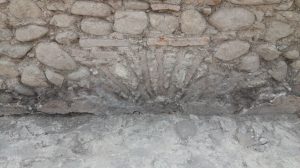 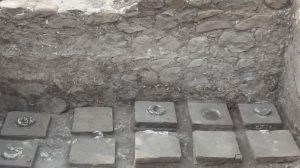 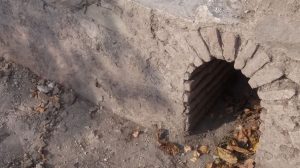 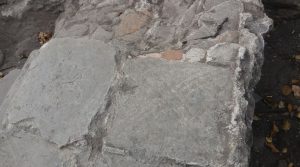 The Roman mansion near Gurkovo was first “discovered” by treasure hunters and the archaeologists had to step in with rescue digs. Photos: Radio Stara Zagora

The Augusta Traiana – Vereia Archaeological Preserve in Bulgaria’s Stara Zagora features the ruins of the Ancient Roman city of Ulpia Augusta Traiana founded by Roman Emperor Trajan (r. 98-117 AD) (after whom it was named) on the site of a previously existing Ancient Thracian settlement called Beroe. (Some recent research indicates it might have been founded by Trajan’s successor, Emperor Hadrian (r. 117-138 AD).)

It saw its greatest urban development later under Roman Emperor Marcus Aurelius (r. 161-180 AD). It quickly became the second most important city in the Roman province of Thrace after Philipopolis (Trimontium), today’s Plovdiv.

In the 2nd-3rd century, Augusta Traiana minted its own coins (a total of 874 of them have been found, as of 2016); it is known to have had commercial contacts with faraway regions and cities such as Sparta, Aquincum (today’s Budapest in Hungary), and the province of Syria.

In the middle of the 4th century, Augusta Traiana became one of the major Early Christian centers in the Balkans.

In the Late Antiquity (4th-6th century) the city of Augusta Traiana was once again known under its original Thracian name of Beroe. Much of it was destroyed by barbarian invasions – by the Goths in the 4th century, the Huns in the 5th century, and later by the Avars, Slavs, and Bulgars. The invasions of the Bulgars and Slavs in the late 7th century, around the time of the two peoples formed the First Bulgarian Empire (680-1018 AD), effectively ended the life of the Ancient Thracian and Roman city of Beroe / Augustra Traiana as it was.

It became part of Bulgaria under Khan Tervel (r. 700-718 AD), who called it Boruy. The city was a major bone of contention during the numerous wars between Bulgaria and Byzantium and became known as Vereia after Byzantium conquered the eastern parts of the First Bulgarian Empire in the late 10th century. Bulgaria reconquered it during the early years of the Second Bulgarian Empire (1185-1396 AD).

In addition to its Neolithic, Ancient Roman, Byzantine, and medieval Bulgarian heritage, the territory of the city of Stara Zagora is dotted with Ancient Thracian archaeological sites, including more than 30 known temples of the main god according to Thracian mythology, the Thracian Horseman.