One of the two exposed foundations of an Ancient Roman triumphal arch from the 1st century AD discovered by archaeologists in Bulgaria’s Plovdiv. Photo: Plovdiv Time

The two foundations of what appears to have been a huge triumphal arch built by the Roman Empire in the 1st century AD in the ancient city of Philipopolis (Trimontium) has been discovered by archaeologists carrying out rescue excavations in the city of Plovdiv in Central South Bulgaria.

The Roman triumphal arch has been discovered in the same spot near the St. Marina (Margaret of Antioch) Church in Bulgaria’s Plovdiv where the archaeological team has recently found an ancient inscription from 303 AD glorifying Roman Emperor Diocletian (r. 284 – 305 AD) after he introduced the so called Tetrarchy system of government in the Roman Empire.

Further finds from the same spot are massive Antiquity ruins and a 7-meter-wide Roman street.

This is also the same site where the archaeological team has already found a very rare piece of lusterware pottery from medieval Egypt in a richly decorated medieval building.

The two bases from a 1st century AD Roman triumphal arch from ancient Philipopolis have been discovered as the team led by archaeologist Elena Bozhinova from the Plovdiv Museum of Archaeology and Assoc. Prof. Kamen Stanev from the Cyril and Methodius Scientific Center at the Bulgarian Academy of Sciences in Sofia has gone in greater depth.

So far the ruins from the Roman triumphal arch excavated by the archaeologists are about 2 meters high but they appear to go deeper into the ground, reports local news and culture site Plovdiv Time.

The ancient triumphal arch bases have been found situated symmetrically on the two sides of the already excavated Antiquity street, and reported to have been very well preserved.

The numerous Ancient Roman architectural fragments discovered on the spot during the rescue excavations in Bulgaria’s Plovdiv in the past few weeks have now been concluded to have been elements from the upper part of the triumphal arch. Initial reports at first had said that two massive buildings located “symmetrically” on both sides of the Antiquity street had been found. 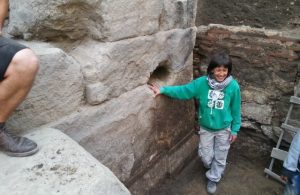 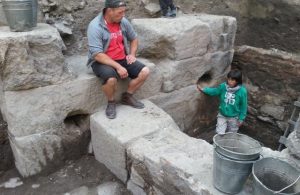 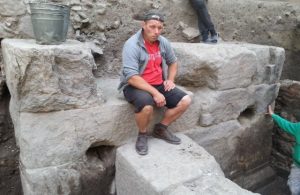 The researchers’ working hypothesis is that the newly discovered Roman triumphal arch collapsed during an earthquake.

Part of the large stone blocks that it was made of were later used for the construction of a room right in the middle of the Antiquity street, the archaeologists say.

While the western base of the Roman arch has been exposed to a greater extent, the ruins of its eastern part remain underneath the sidewalk of the Tsar Boris III Boulevard in Plovdiv, a spot which is not part of the current rescue excavations, lead archaeologist Bozhinova has told Plovdiv Time.

The width of the exposed triumphal arch base is 3.6 meters (11 feet), reports local daily Maritsa. The arch foundations were built of sandstone blocks weighing about 3 – 4 metric tons each.

“The building material is sandstone because at the time the Romans had not started to process the local syenite,” Bozhinova is quoted as saying.

The arch spanned the width of the Roman street which is known to have been 7 meters wide in the 4th century AD. The archaeologists have found evidence of how the street was widened. The street went from the Eastern Gate of Philipopolis (also called Trimontium in the Roman period) to the Ancient Roman Stadium of the city.

Large holes can be seen in the two sandstone foundations of the ancient triumphal arc. They were the spot of large cramp irons covered with lead, a well known construction technique in Roman times.

“You don’t find such [structures] every day,” lead archaeologist Bozhinova is quoted as saying, adding that the construction techniques indicated that what is believed to have been a triumphal arc was constructed in the 1st century AD. 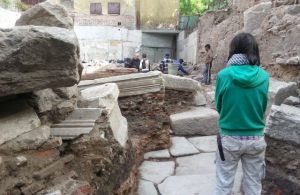 Archaeologist Elena Bozhinova shows the width of the Ancient Roman street over which the triumphal arch used to tower. Photo: Maritsa daily

The fate of the newly discovered Ancient Roman triumphal arch in Bulgaria’s Plovdiv is to be decided upon by a commission of Bulgaria’s Ministry of Culture.

The rescue excavations on the private property near the St. Marina Church – which have already led to the discovery of the medieval Egyptian plate, the Roman inscription dedicated to Emperor Diocletian, and the massive triumphal arch – are to be wrapped up within ten days.

After that, the expert commission’s decision is expected within a month. Plovdiv Time points out that in a number of similar case, the commission has recommended further archaeological excavations.

It adds that it is possible for the triumphal arch from the early period of the Roman Empire to be dismantled, moved, and reassembled in order to become another of Plovdiv’s numerous impressive Antiquity landmarks.

Before its discovery, only one other (Roman) triumphal arch had been found in Bulgaria, again in Plovdiv – an arch from the time of Roman Emperor Hadrian (r. 117 – 138) at the Eastern Gate of Philipopolis.

“Two such facilities have now been found in all of Bulgaria. One is at the Eastern Gate of Philopopolis. However, the one we are excavating here is a much better condition,” lead archaeologist Bozhinova points out. 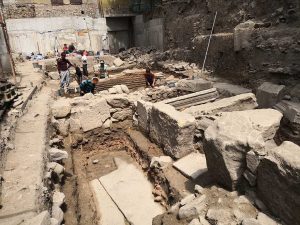 The rescue excavations on a private property near the St. Marina Church in Bulgaria’s Plovdiv have led to a number of really exciting archaeological discoveries. Photo: Plovdiv Time

Prehistoric, Antiquity, and medieval finds keep springing up across Plovdiv as the city’s vast cultural heritage is still being researched.

The latest excavations of the Ancient Thracian and Ancient Roman Nebet Tepe Fortress in the southern Bulgarian city of Plovdiv have revealed issues with earlier archaeological research casting doubt on whether Plovdiv indeed was the oldest city in Europe, while not denying the exquisite historical, archaeological, and cultural value of the site.

Because of previous excavations on the Nebet Tepe Hill in the 1970s, Plovdiv has claimed the title of “Europe’s oldest city” (and the world’s six oldest city, according to a Daily Telegraph ranking).

Later, in the Antiquity period, the city was known as Philipopolis (named after King Philip II of Macedon), and Trimontium (following its conquest by the Roman Empire).

In the most recent archaeological excavations in Plovdiv, the archaeologists have found traces from the Goth invasion of the Roman Empire in 251 AD during rescue digs at the city’s Antiquity Odeon.

Even more recently, a Roman tomb from the western necropolis of Philipopolis has been unearthed by accident on the campus of Plovdiv Medical University.

According to the pre-1980 excavations, the history of the southern Bulgarian city of Plovdiv – often dubbed the oldest city in Europe – began with the human settlement on the ancient hill of Nebet Tepe (“tepe” is the Turkishword for “hill”), one of the seven historic hills where Plovdiv was founded and developed in prehistoric and ancient times.

During the Early Antiquity period Eumolpia / Pulpudeva grew to encompass the two nearby hills (Dzhambaz Tepe and Taxim Tepe known together with Nebet Tepe as “The Three Hills”) as well, with the oldest settlement on Nebet Tepe becoming the citadel of the city acropolis.

In 342 BC, the Thracian city of Eumolpia / Pulpudeva was conquered by King Philip II of Macedonrenaming the city to Philippopolis. Philippopolis developed further as a major urban center during the Hellenistic period after the collapse of Alexander the Great’s Empire.

In the 1st century AD, more precisely in 46 AD, Ancient Thrace was annexed by the Roman Empiremaking Philippopolis the major city in the Ancient Roman province of Thrace. This is the period when the city expanded further into the plain around The Three Hills which is why it was also known as Trimontium (“the three hills”).

Today the prehistoric, ancient, and medieval settlement on Nebet Tepe has been recognized as the Nebet Tepe Archaeological Preserve. Some of the unique archaeological finds from Nebet Tepeinclude an ancient secret tunnel which, according to legends, was used by Apostle Paul (even though it has been dated to the reign of Byzantine Emperor Justinian I the Great (r. 527-565 AD)) and large scale water storage reservoirs used during sieges, one of them with an impressive volume of 300,000 liters. Still preserved today are parts of the western fortress wall with a rectangular tower from the Antiquity period.