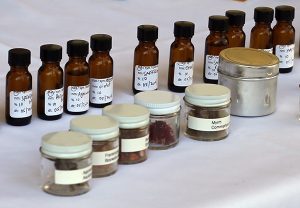 Byzantium in a bottle (or two)

Sniffing out the scents of medieval Constantinople. 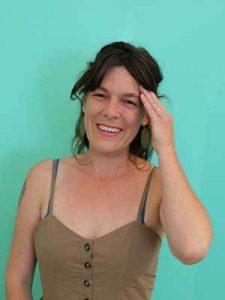 Humans have long sought to harness nature—and scent is no exception. Attempts to master our olfactory surroundings date back thousands of years.

We have tantalizing hints of early efforts at perfumery. A 4,000-year-old perfume factory, for instance, was found in Cyprus, while a Mesopotamian cuneiform tablet provides a record of the first known perfume chemist (a woman named Tapputi-Belatekallim). And there’s ample record of distillation of scent in places as far-flung as Egypt and China in the first centuries A.D.

By the time the Emperor Constantine rechristened the town of Byzantium as Constantinople in A.D. 330, human use of aroma was sophisticated, intentional, and above all, well established. Moreover, thanks to great trade routes such as the Silk Road and the Spice Route, rare materials could be obtained from far away, though often at a fairly high price.

In the earliest years of Constantinople, the new emperor Constantine actually provided instructions about how perfume was to be used in his realm. As an example, take the book known as the Vita Silvestri of the Liber Pontificalis, which records his directions and budgets for the new Christian basilicas he had built throughout the Empire. Plans were customized to each basilica, but most often included a budget for spikenard oil to perfume the chandeliers, balsam oil for the Baptistries, and enough spices and incense to fill the holy days with holy smoke. For worship, scent mattered.

Further evidence for the smells of early Byzantium comes from another unexpected source, a book of commercial law attributed to Emperor Leo VI. His Book of the Eparch lists rules for perfumers—many quite specific, limiting their wares to “pepper, spikenard, cinnamon, aloeswood, ambergris, musk, frankincense, myrrh, balsam, indigo, dyers’ herbs, lapis lazuli, fustic, storax,” and determining the location of their shop stalls as “placed in a row between the milestone and the revered icon of Christ that stands above the Bronze Arcade, so that aroma may waft upwards to the icon and at the same time fill the vestibule of the Royal Palace.” 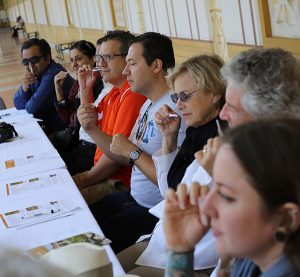 The Byzantine royals’ fascination with perfumery came to a poetic apex with Empress Zoe. According to a polymath monk named Michael Psellus, Zoe was obsessed enough with perfume to warrant training her servants in the art of blending: “Her private apartment was no more royal than a workshop off the marketplace,” writes Psellus, “complete with perfumers and distillers: she had braziers set up all round it, and her maids were all employed in weighing, blending, and other such work.”

It’s no surprise that Byzantine emperors and empresses had appreciation for the value of perfume. Their wealth would guarantee access to expensive materials, and they were part of a long historic tradition of aromatic royalty (Cleopatra’s mythical rose-scented sails spring to mind).

What is remarkable, however, is that less-affluent Byzantines appeared to be equally engaged with perfumery.

In the Byzantine Empire, common domestic applications of scent seem to have been informed by a widespread belief that bad odors represented bad health. Conversely, pleasant smells were understood to drive away illness by blocking “corrupted” air. This seems to have pervaded everyday culture in multiple ways—from city planning (Roman agricultural writer Columella makes copious notes on the aromatic gardens in first-century Byzantium)—to medical practices.

Byzantines believed that healthy individuals were made up of a unique and personalized balance of humors: hotness, coldness, dryness and wetness. Humoral imbalances would lead to physical and psychological illness, but could be cured in some instances through strategic application of scent. An excess of wetness could be healed with a “dry” soup containing aromatic styrax and cassia, for instance. Headaches could be cured with the application of scent to the head. Aromatic rose oil could be used in wine as a laxative. The smell of saffron could combat depression. 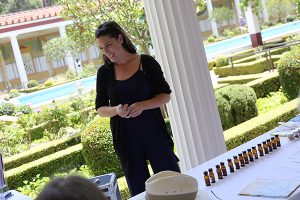 Me, enjoying Byzantine scent in the Getty Villa’s Outer Peristyle

In the home, Byzantines appear to have used scent much as we do today, for pleasure and good health (think of aromatherapy). Narcissus flowers, lilies, verbena, and roses were spread around the house for their pleasant aroma. Aromatic gardens were common, and according to Columella most often included cassia, frankincense, myrrh, and saffron. Byzantine cooks often scented their bread with mastic and their wine with storax. 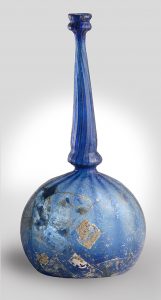 This flask on view in Heaven and Earth: Art of Byanzium from Greek Collections would once have been used to sprinkle myrrh and holy water. Sprinkler Flask, late 1300s–early 1400s, made in Patras, Greece. Glass, 9 7/16 in. high. Image courtesy of the Patras Archaeological Museum

Although the Byzantine nobility and populace seemed to embrace aroma with enthusiasm, early Christians in the empire were not so entranced. The use of scent in places of worship was strongly associated with Greek paganism, and early Byzantine Christian churches were hesitant to adopt liturgical uses of fragrance. So hesitant, in fact, as to warrant outright banishment: In the 3rd century A.D., Christian leader Origen posited that demons adored the smell of incense, and so voted to eradicate scent from churches altogether.

And yet, by the 6th century, Symeon Stylites the Younger used incense precisely to drive away those same demons. Scholars argue about precisely when this change occurred. Some theories date it from the time of Constantine, while others argue that it came about as late as the 5th century. In any event, by the 6th century Christians in Constantinople equated God with sweet perfume.