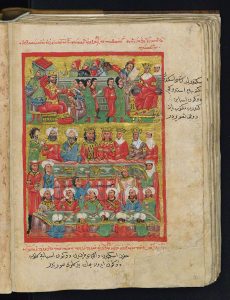 Portrait of Alexios III Komnenos in The Romance of Alexander the Great, 1300s, made in Trebizond, Turkey. Tempera, gold, and ink, 12 5/8 x 9 7/16 in. Image courtesy of the Hellenic Institute of Byzantine and Postbyzantine Studies, Venice, cod. gr. 5

An art historian embraces her foodie side to uncover the tastes of the Byzantine Empire. 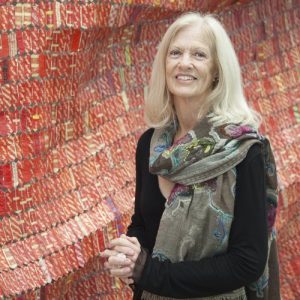 The word “Byzantine” conjures up images of splendor, ritual, and mystery. Though much is now known about the Byzantine Empire, a seemingly secretive and intricately complex culture, one area is even more of a mystery: the taste of Byzantine food. With no known recipe books surviving from the period, historians can only speculate about the exact ingredients, quantities, and cooking procedures needed to replicate the sumptuous dishes we read about in accounts of medieval visitors to Constantinople.

I am currently researching this subject in preparation for “A Taste of Byzantium,” upcoming culinary workshops I’m teaching at the Getty Villa. We’ll be exploring flavors that complement the splendor of the Byzantine world, as seen in the exhibition Heaven and Earth: The Art of Byzantium in Greek Collections. 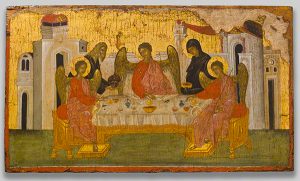 To pare down the daunting geographical and chronological span that is the Byzantine Empire—which lasted from 330 to 1453 and stretched from Albania to Syria, Italy to Turkey—my course will focus on the cuisine of 11th to 14th centuries in Constantinople, a city that caused visitors to marvel at its exotic splendor and sophistication, and a place where ancient traditions of art and scholarship continued to thrive while much of western Europe slipped into the Dark Ages following the decline of the Roman Empire and the subsequent barbarian invasions.

The food of medieval Constantinople was truly a fusion. It combined ancient Roman culinary traditions, local Greek and Anatolian practices, the dictates of the Eastern Orthodox Church, and the influence of cross-cultural exchange. Contantinople (today Istanbul) was and is a vibrant trading center.

So what did the Byzantines eat? We know that the people of Constantinople had access to a large variety of foodstuffs both from nearby fertile lands and teeming waters, and from active trade routes that brought ingredients from afar. The variety of herbs and vegetables available in Constantinople was far greater than that enjoyed by ancient Greeks and Romans—and they were eaten cooked as well as raw, unheard of in Europe. The Byzantines enjoyed meat (when not fasting per the dictates of the Church), primarily pork, lamb, poultry, and certain types of gazelles and donkeys. They were also avid fish-eaters, taking advantage of the rich waters where the Bosporus joins the Black and Aegean Seas, and they carried on the ancient Roman tradition of seasoning nearly everything with fish sauce, garum, which had long since fallen from favor in Europe.

It was in medieval Constantinople that exotic spices such as ginger and nutmeg, known exclusively as medicines in ancient times, made their way into the kitchen. Crusaders passing through Constantinople returned to Europe enchanted by the scents and flavors that only seemed to add to the exoticism and splendor of that magnificent city. It was here also that these Europeans—still slurping their soup from bowls and stabbing everything else from a serving platter onto a trencher (a plate made from a flat round of bread) with their own pocket knives—had their first encounters with forks and spoons, devised to aid Byzantine nobles in protecting their long, ample sleeves from being soiled. 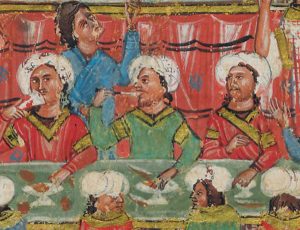 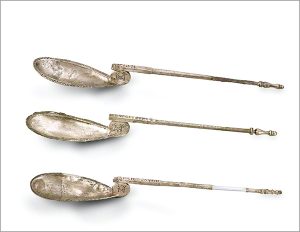 [LEFT]: Elegant eating with forks: Portrait of Alexios III Komnenos (detail) in The Romance of Alexander the Great, 1300s, made in Trebizond, Turkey. Tempera, gold, and ink, 12 5/8 x 9 7/16 in. Image courtesy of the Hellenic Institute of Byzantine and Postbyzantine Studies, Venice, cod. gr. 5
[RIGHT]: Spoons with Inscriptions, 500s–600s, made in Touna el-Gebel, Egypt. Silver, 9 1/2 in. long. Image courtesy of and © Benaki Museum, Athens, 2013

Bifurcated probes/forks, 1000s–1100s, made in Greece. Copper alloy, 4 3/4 in. (image at left) and 3 1/2 in. long (images at center and right). Images courtesy of the Archaeological Museum of Ancient Corinth

It was also in the Byzantine world that the culinary traditions of Eastern Christianity took root. They come down to us today in seasonal menus recognizable for centuries throughout the vast reaches of the Orthodox community. An example of this is the widespread Orthodox Easter tradition of breaking the Lenten Fast with a holiday feast including lamb, red-dyed Easter eggs, and a sweet Easter cake. 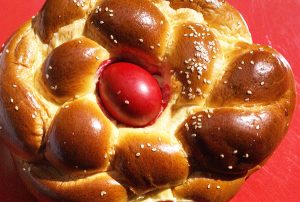 Today’s foodie trend has inspired a rising interest in culinary history and traditions, and recent focus on unraveling the mysteries of Byzantine cuisine has led to new scholarship in this area. Lacking period cookbooks, those attempting to replicate Byzantine recipes must rely on a historical knowledge of available ingredients, literary references to food, dietary rules from monastic communities, and medical treatises from local physicians.  Some of these historical documents, such as the Typika dictating the rules for life in the Eastern Orthodox monasteries, and dietary treatises by 13th-century physician Hierophile the Sophist from Constantinople, have recently been translated into English and are being used as resources to illuminate this relatively untapped area of culinary study.

As for my upcoming culinary course, research is well underway and my test kitchen is getting quite a workout! And while committing to create a meal for the course that is as authentic a replication as possible, I also want that food to taste good. I’ve come up with a delicious version of Hierophile’s “Byzantine Sole,” fresh fish fillets delicately sautéed in olive oil and then simmered in a sauce of white wine vinegar, honey, and garum, and also a wonderful pureed root vegetable dish which I hope you will enjoy.