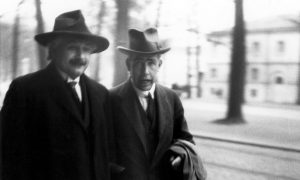 Is or is not? Albert Einstein and Nils Bohr attend the Solway conference in 1920 in Brussels, Belgium. / Wikimedia Commons

Einstein was responding to a letter from the German physicist Max Born regarding quantum mechanics.

‘The theory produces a good deal but hardly brings us closer to the secret of the Old One,’ wrote Albert Einstein in December 1926. ‘I am at all events convinced that He does not play dice.’

Einstein was responding to a letter from the German physicist Max Born. The heart of the new theory of quantum mechanics, Born had argued, beats randomly and uncertainly, as though suffering from arrhythmia. Whereas physics before the quantum had always been about doing this and getting that, the new quantum mechanics appeared to say that when we do this, we get that only with a certain probability. And in some circumstances we might get the other.

Einstein was having none of it, and his insistence that God does not play dice with the Universe has echoed down the decades, as familiar and yet as elusive in its meaning as E = mc2. What did Einstein mean by it? And how did Einstein conceive of God?

Hermann and Pauline Einstein were nonobservant Ashkenazi Jews. Despite his parents’ secularism, the nine-year-old Albert discovered and embraced Judaism with some considerable passion, and for a time he was a dutiful, observant Jew. Following Jewish custom, his parents would invite a poor scholar to share a meal with them each week, and from the impoverished medical student Max Talmud (later Talmey) the young and impressionable Einstein learned about mathematics and science. He consumed all 21 volumes of Aaron Bernstein’s joyful Popular Books on Natural Science (1880). Talmud then steered him in the direction of Immanuel Kant’s Critique of Pure Reason (1781), from which he migrated to the philosophy of David Hume. From Hume, it was a relatively short step to the Austrian physicist Ernst Mach, whose stridently empiricist, seeing-is-believing brand of philosophy demanded a complete rejection of metaphysics, including notions of absolute space and time, and the existence of atoms.

But this intellectual journey had mercilessly exposed the conflict between science and scripture. The now 12-year-old Einstein rebelled. He developed a deep aversion to the dogma of organised religion that would last for his lifetime, an aversion that extended to all forms of authoritarianism, including any kind of dogmatic atheism.

This youthful, heavy diet of empiricist philosophy would serve Einstein well some 14 years later. Mach’s rejection of absolute space and time helped to shape Einstein’s special theory of relativity (including the iconic equation E = mc2), which he formulated in 1905 while working as a ‘technical expert, third class’ at the Swiss Patent Office in Bern. Ten years later, Einstein would complete the transformation of our understanding of space and time with the formulation of his general theory of relativity, in which the force of gravity is replaced by curved spacetime. But as he grew older (and wiser), he came to reject Mach’s aggressive empiricism, and once declared that ‘Mach was as good at mechanics as he was wretched at philosophy.’

Over time, Einstein evolved a much more realist position. He preferred to accept the content of a scientific theory realistically, as a contingently ‘true’ representation of an objective physical reality. And, although he wanted no part of religion, the belief in God that he had carried with him from his brief flirtation with Judaism became the foundation on which he constructed his philosophy. When asked about the basis for his realist stance, he explained: ‘I have no better expression than the term “religious” for this trust in the rational character of reality and in its being accessible, at least to some extent, to human reason.’

But Einstein’s was a God of philosophy, not religion. When asked many years later whether he believed in God, he replied: ‘I believe in Spinoza’s God, who reveals himself in the lawful harmony of all that exists, but not in a God who concerns himself with the fate and the doings of mankind.’ Baruch Spinoza, a contemporary of Isaac Newton and Gottfried Leibniz, had conceived of God as identical with nature. For this, he was considered a dangerous heretic, and was excommunicated from the Jewish community in Amsterdam.

Einstein’s God is infinitely superior but impersonal and intangible, subtle but not malicious. He is also firmly determinist. As far as Einstein was concerned, God’s ‘lawful harmony’ is established throughout the cosmos by strict adherence to the physical principles of cause and effect. Thus, there is no room in Einstein’s philosophy for free will: ‘Everything is determined, the beginning as well as the end, by forces over which we have no control … we all dance to a mysterious tune, intoned in the distance by an invisible player.’

The special and general theories of relativity provided a radical new way of conceiving of space and time and their active interactions with matter and energy. These theories are entirely consistent with the ‘lawful harmony’ established by Einstein’s God. But the new theory of quantum mechanics, which Einstein had also helped to found in 1905, was telling a different story. Quantum mechanics is about interactions involving matter and radiation, at the scale of atoms and molecules, set against a passive background of space and time.

Earlier in 1926, the Austrian physicist Erwin Schrödinger had radically transformed the theory by formulating it in terms of rather obscure ‘wavefunctions’. Schrödinger himself preferred to interpret these realistically, as descriptive of ‘matter waves’. But a consensus was growing, strongly promoted by the Danish physicist Niels Bohr and the German physicist Werner Heisenberg, that the new quantum representation shouldn’t be taken too literally.

In essence, Bohr and Heisenberg argued that science had finally caught up with the conceptual problems involved in the description of reality that philosophers had been warning of for centuries. Bohr is quoted as saying: ‘There is no quantum world. There is only an abstract quantum physical description. It is wrong to think that the task of physics is to find out how nature is. Physics concerns what we can say about nature.’ This vaguely positivist statement was echoed by Heisenberg: ‘[W]e have to remember that what we observe is not nature in itself but nature exposed to our method of questioning.’ Their broadly antirealist ‘Copenhagen interpretation’ – denying that the wavefunction represents the real physical state of a quantum system – quickly became the dominant way of thinking about quantum mechanics. More recent variations of such antirealist interpretations suggest that the wavefunction is simply a way of ‘coding’ our experience, or our subjective beliefs derived from our experience of the physics, allowing us to use what we’ve learned in the past to predict the future.

But this was utterly inconsistent with Einstein’s philosophy. Einstein could not accept an interpretation in which the principal object of the representation – the wavefunction – is not ‘real’. He could not accept that his God would allow the ‘lawful harmony’ to unravel so completely at the atomic scale, bringing lawless indeterminism and uncertainty, with effects that can’t be entirely and unambiguously predicted from their causes.

The stage was thus set for one of the most remarkable debates in the entire history of science, as Bohr and Einstein went head-to-head on the interpretation of quantum mechanics. It was a clash of two philosophies, two conflicting sets of metaphysical preconceptions about the nature of reality and what we might expect from a scientific representation of this. The debate began in 1927, and although the protagonists are no longer with us, the debate is still very much alive.

I don’t think Einstein would have been particularly surprised by this. In February 1954, just 14 months before he died, he wrote in a letter to the American physicist David Bohm: ‘If God created the world, his primary concern was certainly not to make its understanding easy for us.’