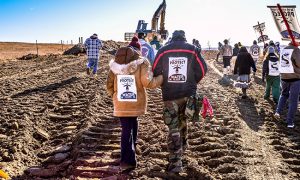 Trump will try to fast-track fossil fuel projects across the country. That makes the final months of President Obama’s term more important than ever.

With Donald Trump’s presidency on the horizon, it is now more important than ever for President Obama to stop the $3.7 billion Dakota Access pipeline, which is slated to carry 470,000 barrels of Bakken crude oil per day, with a growth potential of up to 570,000 barrels. It is the only solution that truly respects the treaty rights of the Standing Rock Sioux, protects the tribe’s sacred areas, defends the water of life, and takes into account the pipeline’s devastating climate impacts.

There is no doubt that Donald Trump poses an urgent threat to our climate, to our environment, and to the integrity of Mother Earth. He will try to fast-track fossil fuel projects across the country, including the Dakota Access pipeline and other transport infrastructure. That makes the final months of President Obama’s term more important than ever. President Obama’s legacy must include sending a resounding message to the world that we will not stand for fossil fuel pipelines that threaten the rights of indigenous peoples and our very existence. To avoid the worst impacts of climate change, it is absolutely imperative to keep the world’s remaining fossil fuels in the ground.

The Army Corps of Engineers announced this week that it was delaying until further analysis and consultation with the Standing Rock Sioux tribe a final easement that would allow the drilling for the pipeline to go under the Missouri River at Lake Oahe. President Obama has previously stated that the Army Corps is exploring options for rerouting the pipeline. Unfortunately, simply rerouting the project does not go far enough. The administration should revoke the permits, pull the easement, and order a full environmental impact statement. There are no safe routes for carrying this fracked and highly volatile oil. Any other proposed alternatives, such as drilling deeper under the Missouri River or double-lining the steel pipe, do not provide a guarantee against the prevention of future leaks and spills.

Already this year, we have seen over 220 significant pipeline spills in the U.S. alone. Pipelines by their very nature are threats to the land, water, and climate. If the U.S. Army Corps of Engineers had completed a proper full environmental impact statement assessment, it would have come to the conclusion that this project poses an immediate threat to Native communities in the region, who are already experiencing disproportionate health and environmental impacts from failed federal policies and practices. Additionally, it threatens the drinking water for millions of people downstream on the Missouri River.

Many don’t realize that an early proposal for the Dakota Access pipeline called for the project to cross the Missouri River north of Bismarck, North Dakota, a city that is mostly White. That plan was scrapped because of the potential threat to the city’s water supply. Instead, the company chose to reroute the pipeline to cross just north of the Standing Rock Sioux reservation, a sovereign Native nation that had not given its consent for construction of the pipeline. This suggests that people were concerned enough about the threats the pipeline posed to Bismarck water supplies that they used political power to move it downstream; they didn’t care if it impacted the Lakota and Dakota of Standing Rock. This is environmental racism. The United States has an executive order indicating it would not discriminate on the basis of race, color, or national origin in its environmental decision-making processes. This project is a glaring violation of that order.

The Obama administration should pull the plug on this project immediately. Members of the Standing Rock Sioux, along with other Native water protectors and supporters, are under constant attack for peacefully resisting the destruction of their water, land, and sacred sites. We have seen an over-militarized police presence using tear gas, dogs, rubber bullets, bean bag shotgun rounds, and riot-control sound cannons on water protectors, medics, and journalists. These attacks have come while Energy Transfer Partners ignored the administration’s request for a voluntary halt to construction, instead continuing to build right up to Lake Oahe. Currently, equipment is poised for drilling under the lake.

We have also started to see the financial institutions backing this project begin to waver, noting their concerns about a project that tramples all over indigenous rights as well as the human rights of peaceful supporters. Norway’s biggest bank, DNB, said Nov. 17 that it is divesting its assets in the project after previously announcing that it is also reconsidering the credit it is providing, which amounts to 10 percent of the total funding. Other major players, including Citibank, TD Securities, Wells Fargo, and SunTrust, must be held accountable for continuing to finance the destruction of sacred treaty lands and our climate. If you have money in any of the institutions financing the Dakota Access pipeline, reach out to them to reconsider their decision or consider banking elsewhere. We hold the power to push them to divest and pull their loans.

And there’s more to be done.

President-elect Trump certainly poses a threat to the climate, and we have urgent work to do before he takes over the White House. That starts with urging President Obama to do everything in his power to stop this pipeline. His remarks last month about “letting the process play out” cannot mean kicking this down the road to our next president. We also need to continue to make it undesirable for financial institutions to invest in fossil fuel infrastructure, especially those projects that contribute to human rights violations. We need to mobilize millions of people to ensure the next administration faces up to the reality that the movement for climate justice and the Native nations movement for indigenous peoples’ rights will only continue to grow stronger. If these climate deniers choose to move forward with dangerous fossil fuel projects, we will fight back—peacefully—at every opportunity. Climate change is Mother Earth’s call for a real revolution, an awakening of humanity to reevaluate its relationship to the sacredness of the Earth, the water of life, and nature.