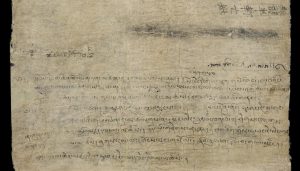 Entering the Getty Research Institute galleries in the exhibition on the famous Buddhist site of Dunhuang, we first encounter a document on tattered paper somewhat larger than a placemat. As the label indicates, it bears letters of introduction for a Chinese monk on pilgrimage to India, the birthplace of Buddhism, requesting shelter and guidance from temples along the way.

Just a casual glance at this document suggests there is more to the story than simply the letters’ content—for example, the handwriting is inconsistent, entire lines of text have been effaced, and Chinese characters are interspersed between the Tibetan-language letters seemingly at random. The manuscript, it seems, was a collection of copies and notes carried by the pilgrim throughout his travels rather than a formal document presented to regional authorities. (See Manuscripts and Travellers, 2011, by Sam van Schaik and Imre Galambos, for more on this—most of the information about the manuscript in this post is indebted to this comprehensive study.) The texts’ seemingly haphazard sequence and placement turn out to be crucial for reconstructing the pilgrim’s journey. 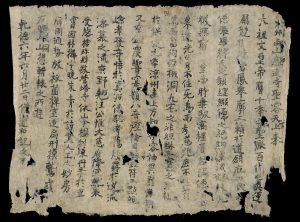 The document on view is, in fact, just one part of a much larger and more complex manuscript that was disassembled for conservation purposes after being taken to London in the twentieth century. In its original mounting, a handwritten copy of a Chinese stele inscription appeared after the letters and jottings. This transcription, which commemorates a famous seventh-century temple in the Hexi corridor, supplies what scholars think was the pilgrim monk’s name, Daozhao, and a date of 968. These two texts were attached to part of a Chinese Buddhist scripture. Upon the manuscript’s disassembly, a tantric ritual text in Tibetan was revealed, in turn, on the back of the Chinese scripture.

Comprising four very different texts in two languages, this object in its totality produces flashes of insight into life in the 10th-century Hexi corridor, for example, in the pervasive importance of Tibetan language and culture. Moreover, the image of Buddhism that emerges is more fluid and inclusive than modern divisions along doctrinal or linguistic lines suggest. 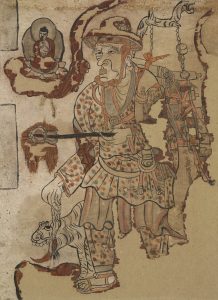 The manuscript’s significance extends far beyond the object itself, and it charts its own exquisite path through the Research Institute galleries. To the right, the drawing of a pilgrim monk suggests an immediate connection—it is easy to imagine him carrying a similar travel document among the scrolls on his open-frame pack. However, as demonstrated by the many examples of this icon from across East and Inner Asia, it is often unclear whether he was meant to represent a specific historical traveler or a venerated archetype. The monk here, moreover, is depicted with the generic period physiognomy for Dunhuang representations of Central Asians. The association between Daozhao and the painted pilgrim monk is less straightforward than it may initially seem. 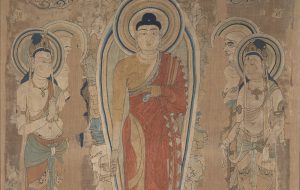 Looking up from the case and down into the next gallery, the luster of a spectacularly large eighth-century silk embroidery registers at roughly eye level. The buddha standing in the center above the row of lay and monastic donors is a depiction of the very miraculous icon housed in the temple where Daozhao, our pilgrim, copied the stele. This famous image was said to have emerged from the living rock of a mountain at Fanhe some 850 kilometers from Dunhuang, near present-day Wuwei, serving as a barometer of political rectitude by losing its head during periods of turbulence.

While their shared subject matter speaks of the Fanhe icon’s lasting regional importance, the embroidery and stele transcription diverge in their relationship to the concept of place. The transcription, as a kind of pilgrimage souvenir, documents the monk’s physical presence at the site of the icon’s miraculous appearance. The embroidery does something of the reverse, relocating the icon in the midst of its Dunhuang patrons by means of dedicatory inscriptions and selective period style. (For more on this topic, see sources by Shi Weixiang, Wu Hung, and Zhao and McCoy listed below under “Further Reading.”) 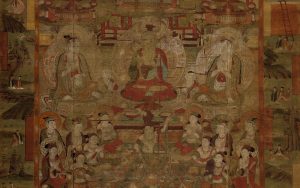 Continuing into the next gallery, we encounter on the adjacent wall a large silk painting of the Requiting Kindness Sutra, the text that served as backing for the pilgrim’s documents. This fine painting was likely produced more than a century before Daozhao’s journey. In the intervening years the sutra remained a standard subject for Dunhuang wall painting. As the graphic mounted next to the painting explains, later versions of this painting exhibit obvious stylistic continuity despite being produced in a different political regime and at much larger size.

Broadly put, Daozhao’s manuscript produces meaning in two basic ways: linear progression, in the journey represented by the topographic sequence of letters and notes, and lateral connections, both inwardly among the four discrete texts and outwardly with other sources, such as those in the Research Institute galleries.

Rich as these connections are, it is important to reflect on what type of cultural history this manuscript does not make possible. We do not have anything approaching complete understanding of where Daozhao went, much less of what he felt, thought, and, for the most part, did along the way. It is thus a radically different type of source than the travelogues of such figures as Xuanzang (602–664) and Marco Polo (c. 1254–1324) that were transmitted and edited over many centuries and have produced countless childhood fantasies. In a sense, it is their inverse: Daozhao’s journey is reconstructed through the unexplained juxtaposition of unlikely elements, and through copies, notes, and relics—traces of the journey left without the often-inescapable influence of the traveler’s own narration.