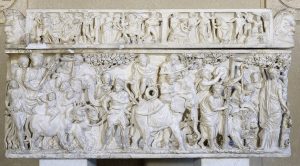 A guide to three heroes of antiquity who were ornaments of choice for funerary art. 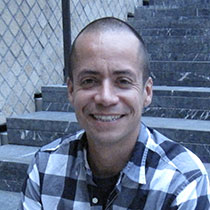 When it came to decorating their coffins, the ancient Greeks and Romans often turned to great heroes. These were men of politics and war whose epic deeds and superior qualities set them far above their mortal peers in strength, intellect, cunning, and sex appeal. No wonder they were often selected by ordinary mortals to accompany them on their journey in death.

The heroes of antiquity were very different from those of today. Today we prefer our heroes good-hearted and nearly flawless, wielding brains and brawn to strike a blow for the common man. The opposite was true in ancient Greece. The mythological heroes of 2,000 years ago did not rise from the lower classes, nor were they particularly good-hearted.

Life in antiquity was harsh and violent, and many ancient heroes rose to their exalted status because they were the harshest and most violent. Kidnapping, raping, slaying innocents, slaughtering their own children? These deeds were often casually ignored.

Nonetheless, the ancients often picked precisely these heroes to accompany them on their journey in death. Let’s see why.

Struggle in life is rewarded after death

The mortal hero Herakles led a life of struggle and hardship that was amply rewarded at his death. He rose to Mount Olympus as one of the Greek gods and was granted the hand of the goddess of youth, Hebe, in marriage.

Ironically, Herakles’ new mother-in-law was the goddess Hera, who had tormented him during his lifetime by imposing the famous twelve labors and by causing him to go insane and kill his children (and by some accounts, his wife).

Herakles and his many adventures were some of the most popular themes on Roman sarcophagi, such as the one shown above (larger view here). The idea that a man could overcome challenges foisted on him by the gods resonated with the Roman aristocracy. It was also comforting to know that Herakles’ travails landed him a beautiful (and ever-youthful) goddess.

The reassurance that no matter how difficult it got in life, it could get better at death, finds it expression in some of the most expressive of Roman sarcophagi.

Even the greatest among us have…challenges 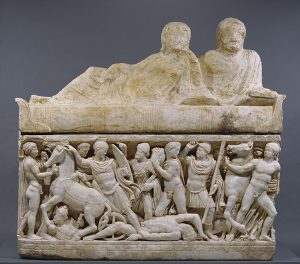 The hero Achilles was another popular subject for funerary imagery. Known in the Homeric period as the greatest of the Greek heroes, Achilles was famed for his military prowess, his ego, and his near-immortality. He was also a renowned hothead who could be more easily wounded by words and actions than spears and swords.

While the Trojan War raged, Achilles felt slighted by King Agamemnon and withdrew from the battlefield. No one could cajole him to leave his tent, even as the tide turned against the Greeks. Only after his cousin/lover/beloved companion Patroklus was killed by the Trojan prince Hektor did Achilles once again enter the arena.

This story is highlighted on a sarcophagus at the Getty Villa with scenes of Achilles’ life. One side panel concerns itself with Achilles’ discovery in hiding, while the other depicts him donning his famous armor before returning to battle. The front panel, the one intended to be seen most easily, shows Achilles stepping into a war chariot, resplendent in his armor, while the lifeless body of Hektor lies prostrate and heroically nude on the ground.

This scene is curious because it depicts Achilles defiantly desecrating the body of another hero. The position of Achilles’ body, as he literally steps on the corpse of Hektor, serves to foreshadow Achilles’ own demise from an arrow to his heel. The ancient viewer would have been quick to call to mind the next scene in the story, in which Achilles drags Hektor’s corpse around the walls of Troy.

The scene reminds us that even the greatest among us have great flaws. Nobody’s perfect.

Though flawed, humanity can rally to great deeds 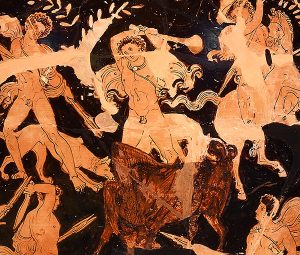 Another hero of note whose image often appeared on ancient sarcophagi is the ancient prince of Calydon, Meleager.

With the help of other ancient heroes such as Atalanta and the Dioscouri, he won renown for dispatching a large boar sent by Artemis to terrorize his homeland. This hopeful story of heroes coming together for a common cause quickly took a sinister turn, however, as they all turned on one another.

The story of the so-called Calydonian boar hunt was a popular motif not only on Roman sarcophagi but also on earlier funerary vessels such as those exhibited in the exhibition Dangerous Perfection: Funerary Vases from Southern Italy, such as the one shown above.

Here the focus of the story is the hunt itself, with mortal men and a woman overcoming a terrifying unknown quantity in the boar. Images of the hunt show the group working in concert in the face of danger, behaving like true heroes in order overcome a common enemy. Anyone familiar with the story, however, would think immediately of the aftermath of this collaborative effort: a deadly battle among the heroes driven by jealousy over perceived slights to their honor. Yet this bloody ending to what started as a story of overcoming great odds proves that even the greatest of men were inherently flawed. Their pride ensured their ultimate demise.

Though humanity is capable of the most childish self-interest, this story tells us, we can also rally to the greatest and bravest deeds.

Ancient heroes such as Herakles, Achilles, and Meleager represented what mortal men could achieve if they were fortunate enough to be born into a favorable situation and could distinguish themselves from their peers. They also embodied the flaws and defects of every man—because no hero’s life, however celebrated, was without its glaring shortcomings.

That people in antiquity were willing to overlook these character weaknesses to associate themselves with the fantastical lives of an Achilles or a Herakles probably shouldn’t come as a surprise. The ancient heroes were mortal men with mortal problems, and that made them eminently relatable as men (and sometimes women) came to terms with their final lot in life.