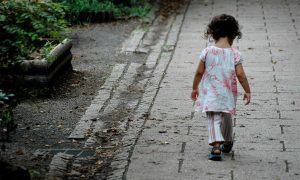 ‘What would you do if you saw a six-year-old alone in a public place?’ So begins a short video from UNICEF, which has received more than 2 million views on YouTube. In the video, Anano, a six-year-old child actor, is dressed in different ways and placed in different scenarios. When Anano is well-dressed, we see people actively trying to help her. But when Anano’s appearance is altered to make her look homeless, we see people shunning her and sometimes even telling her to go away.

Why do people treat Anano so differently depending on how she is dressed?

One, not very flattering, explanation is that people have ingrained biases and prefer to help the privileged rather than the disadvantaged. After all, the dishevelled Anano resembles a child from a culture of travellers, which could have triggered many prejudices. Still, we can imagine a different child from a different cultural background placed in similar circumstances. It would not be surprising to find that people’s reactions remain similar. Indeed, the people in the video appear to be no different from you and me. Would we have reacted in similar ways if we had been in a similar situation?

I would like to propose a different way of looking at Anano’s case, one that highlights a basic problem in how we respond to other people. There is an important distinction between urgency and need. A situation is urgent if it requires immediate attention and action. For instance, a person drowning is an urgent situation, since that person will die if no one comes to his or her aid. A need, in particular a fundamental need, is something that is essential or very important for someone to, for example, pursue a good life. Receiving basic education would qualify as a fundamental need for a child, since without basic education it would be nearly impossible for a child to acquire the knowledge necessary to be an adequately functioning individual in society.

What Anano’s video might reveal is that, when people see the well-dressed child alone in a public place, they are treating the situation as urgent. Indeed, it is unusual: maybe the girl is lost. And she might face even greater danger if she were to meet the wrong kind of people. Given the perception that this could be an urgent situation, people are motivated to help.

In contrast, when people see a homeless-looking Anano, they don’t appear to regard it as an urgent situation. Sadly, the sight of homeless children is all too common. It is not difficult to imagine people thinking that this girl has probably been on the street for some time. Maybe her parents have even sent her out to solicit money. Given this perception, while people might be uncertain about who bears the responsibility for meeting the needs of a homeless child (is it the parents? the government?), one can see how they might think that they don’t have a responsibility to help her.

This distinction between urgency and need provides us with a different and plausible explanation for the behaviour of the people in the video, but it doesn’t justify it. The mistake that the bystanders make, and that you and I are just as likely to make, lies in thinking that they don’t have responsibility towards the kind of homeless children portrayed by Anano, just because the situation is not urgent. In fact, all of us have the responsibility to see to it that every human being’s fundamental needs are met.

Of course, some people believe that, as long as we don’t harm others, we’re not obliged to help anyone beyond immediate family and friends. But if this view were true, we wouldn’t be obliged to help strangers even in an urgent situation. Suppose you are a hermit, miles away from civilisation, and you find a newborn on your doorstep. The baby will die of starvation unless she is given some food, and you are the only person who can help her. But, on the view discussed, you wouldn’t have any obligation to help the baby, and you’d be permitted to let her die, since she is not your baby and you didn’t cause her to be in this predicament. Such a view seems callous and misguided.

Other people might think that we are obliged to only help people in urgent situations. But consider this case. Suppose an 80-year-old man would die in two days unless he is helped, while a 20-year-old woman would die in a year unless she is helped. When resources are not limited, we should of course try to help both of them. But suppose that resources are limited and we can save only one or the other. In such a case, even though the man’s situation is more urgent, it seems that we should help the woman. Among other things, the woman would stand to benefit much more if she were helped. The fact that we sometimes have greater responsibility towards people in need than towards people in urgent situations suggests that it is not true that we should help only people in urgent situations.

UNICEF estimates that, if we do not act, by 2030, more than 165 million children worldwide will live in extreme poverty, or on less than $1.90 a day; almost 70 million children under the age of five will die of largely preventable causes; more than 60 million children aged six to 11 will be out of school; and 750 million women will have been married as children. That is a huge number of people in need, even though their need might not be perceived as urgent.

We should try to change our attitude towards the homeless Ananos of this world, and be much more sympathetic and willing to help them. Anano’s video teaches us that, while we might well be primed to respond appropriately to urgent situations, we could and should do a much better job of responding to other people’s needs.