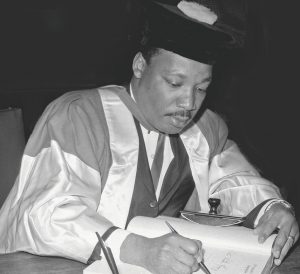 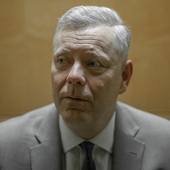 While controversy about the removal of Confederate memorials in the US rumbles on, in the north-east of England, plans to honour one of the US South’s most famous sons are coming to fruition.

Freedom City 2017 is an ambitious programme of academic, artistic, cultural and educational activities to mark the 50th Anniversary of Martin Luther King’s visit to Newcastle upon Tyne, where, on November 13 1967, King received an honorary doctorate in civil law from Newcastle University. It was the only time during his six trips to England that he left London.

But why, in the midst of a crushing work schedule and at a time of ill health, did King fly the Atlantic and catch an overnight train from London to Newcastle to spend eight waking hours in a city he knew nothing about, at an institution he had probably never heard of until it invited him to accept its highest honour? In my book Martin Luther King in Newcastle upon Tyne, I argue he had two main reasons.

The first was timing. King’s posthumous elevation to iconic status makes it easy to forget that he was hugely controversial and frequently reviled during the last years of his life. At the time of his visit, he was under enormous personal and political pressure. He was struggling to find a constructive way forward for the civil rights movement and deeply depressed about his own ability to lead it. The book King was working on when he received his invitation from Newcastle was aptly titled Where Do We Go From Here? – part manifesto, part plea for help.

King faced incessant criticism at home, and not just from the die-hard racists and segregationists who had always opposed him. White and black moderates alike attacked him for being too radical, particularly as he railed against US involvement in Vietnam and blamed unfettered global capitalism for some of America’s, indeed the world’s, major social, economic and political problems.

At the same time, militants – particularly those involved with the Black Power movement – attacked King for being too conservative, often rejecting King’s nonviolent approach to social change and his faith in progressive interracial coalitions to address systemic inequalities.

In this fraught climate, King found enormous therapeutic value in accepting the invitation to visit a country and an institution that seemed truly appreciative of his past accomplishments and supported his ongoing activism for peace and social justice.

In a heartfelt note King sent to the university’s vice-chancellor after his visit, he wrote of how, “in the course of constant criticism and malignment of one’s best efforts, the recognition … of the historic significance of one’s work in the ministry is a tremendous encouragement, far overshadowing the barbs and arrows from the daily press”.

The second major reason why King made the gruelling journey to the north-east was his recognition that the US civil rights movement was always part of a global fight for human rights and social justice in an era of Cold War politics and decolonisation.

In the spellbinding (and long-lost) impromptu speech he gave following the Newcastle degree ceremony, King spoke of the “inextricable network of mutuality” that bound together the peoples of the world. He also called upon people of goodwill everywhere to confront what he called the “three urgent and indeed great problems that we face not only in the United States of America but all over the world today … the problem of racism, the problem of poverty and the problem of war.”

Brian Dooley, a senior adviser at NGO Human Rights First, recently noted in the Huffington Post that “the challenges King identified 50 years ago in Newcastle are wearyingly familiar”. Indeed, Dooley argued that they had taken on new urgency:

The rise of Trumpism and its apologia for white supremacy, the Brexit referendum and the emergence of illiberal democracies across Europe all enable racism, from Virginia to Vienna, from New York to Newcastle.

It is this contemporary context that makes the public commemoration of King’s Newcastle visit so timely and so important.

In announcing plans for Freedom City 2017 in parliament’s Westminster Hall on November 1 2016, Chi Onwurah, MP for Newcastle Central, lamented that, as a mixed-race child born on Tyneside, she simply had no idea that King, “an inspiration for individuals around the world, including me,” had ever visited her city. It is important to rediscover these and other stories that illustrate the racial, ethnic and religious diversity – and the transnational relationships – that have always characterised British history and culture.

King’s visit was part of a long, largely neglected history of links between the north-east and the African-American freedom struggle that stretched back into the 18th and 19th centuries, when towering black historical figures such as Olaudah Equiano, Frederick Douglass and Ida B. Wellswere among the many distinguished black activists who visited the region.

There is a good deal at stake in carefully curating these memories of diversity and international connections, especially when the history being taught in British schools is becoming increasingly parochial. This trend makes for bad, myopic history. It also does a huge disservice to our children by failing to prepare them for the challenges of living in an evermore interconnected world.

More than that, as historian and broadcaster David Olusoga reminds us in his splendid book Black and British: A Forgotten History:

With black history and black people largely expunged from the mainstream narrative of British history, we have been left with a distorted and diminished vision of our national past … Black British history is everyone’s history and is all the stronger for it.

Which brings us back to monuments and commemorations. As Olusoga knows only too well, public monuments and other acts of commemoration are less about teaching or even representing “historical truth” than about projecting power. They invariably reflect the ideological positions and political agendas of those with the money and influence to erect or stage them.

Yet, memorialisation isn’t always reactionary. It can also serve progressive goals, helping to rectify the dangerous historical amnesia described by Olusoga, a proud self-declared “Geordie Nigerian” who, like Chi Onwurah and so many others, appears to have been unaware of King’s visit while growing up in Newcastle. Hopefully the Freedom City 2017 commemorations will help a new generation of Tynesiders and others learn more about both the enduring significance of King’s visit and the area’s historic diversity.