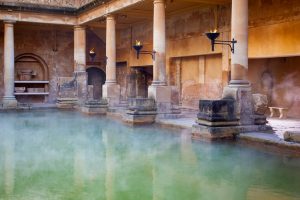 The baths at Bath, England. Romans by Shutterstock

The Romans are well known for introducing sanitation to much of their empire – but did it improve their health? 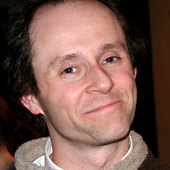 Prior to the Romans, Greece was the only part of Europe to have had toilets. But by the peak of the Roman Empire in the 3rd century AD, the Romans had introduced sanitation to much of their domain, stretching across western and southern Europe, the Middle East and North Africa. Their impressive technologies included large multi-seat public latrines, sewers, clean water in aqueducts, elegant public baths for washing, and laws that required towns to remove waste from the streets. But how effective were these measures in improving the health of the population?

Modern clinical research has shown that toilets and clean drinking water decrease the risk of human gastrointestinal infections by bacteria, viruses and parasites. We might, therefore, expect that this area of health would improve under the Romans compared with the situation in Bronze Age and Iron Age Europe, when these sanitation technologies did not exist. Similarly, we might also expect that ectoparasites such as fleas and body lice might become less common with the introduction of regular bathing and personal hygiene.

A new study I’ve published in Parasitology has brought together all the archaeological evidence for intestinal parasites and ectoparasites in the Roman world in order to evaluate the impact of Roman sanitation technology upon health. The study compares the species of parasites present before the Romans in the Bronze Age and Iron Age, and also after the Romans in the early medieval period. 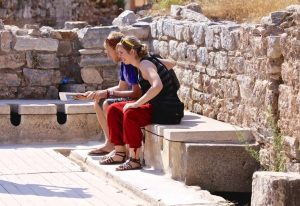 I found a number of surprising findings. Unexpectedly, there was no drop in parasites spread by poor sanitation following the arrival of the Romans. In fact, parasites such as whipworm, roundworm and dysentery infections gradually increased during the Roman period instead of falling as expected. This suggests that Roman sanitation technologies such as latrines, sewers and clean water were not as effective in improving gastrointestinal health as you might think. 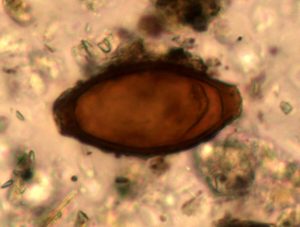 It is possible that the expected benefits from these technologies was counteracted by the effects of laws requiring waste from the streets to be taken outside towns. Texts from the Roman period mention how human waste was used to fertilise crops in the fields, so parasite eggs from human faeces would have contaminated these foods and allowed reinfection of the populations when they ate.

The second surprising finding was that there was no sign of a decrease in ectoparasites following the introduction of public bathing facilities to keep the population clean. Analysis of the number of fleas and lice in York, in northern England, found similar numbers of parasites in Roman soil layers as was the case in Viking and medieval soil layers. Since the Viking and medieval populations of York did not bath regularly, we would have expected Roman bathing to reduce the number of parasites found in Roman York. This suggests that Roman baths had no clear beneficial effect upon health when it comes to ectoparasites. 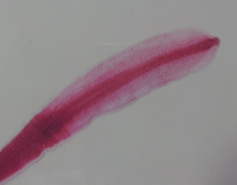 The fish tapeworm also became more common in Europe under the Romans. In Bronze Age and Iron Age Europe fish tapeworm eggs have only been found in France and Germany. However, under the Roman Empire, fish tapeworm was found in six different European countries. One possibility that would explain the apparent increase in distribution of the parasite is the adoption of Roman culinary habits.

One popular Roman food was garum, an uncooked fermented fish sauce made from fish, herbs, spices and salt. We have archaeological and textual evidence for its manufacture, storage in sealed clay pots, transport and sale across the empire. It is possible that garum made in northern Europe would have contained fish infected with fish tapeworm, and when traded to other parts of the empire this could have infected people living outside the original area endemic for the disease.

This is not to say that Roman sanitation was a waste of time. It would have been useful having public latrines so that people in town would not have had to return home to use the toilet. A culture of public bathing would have made people smell better too. However, the archaeological evidence does not indicate any health benefit from this sanitation, but rather that Romanisation led to increase in certain parasite species due to trade and migration across the empire.