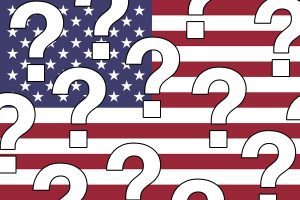 Recently, the International Monetary Fund made grim projections for US economy in the times to come. Well, perhaps not necessarily completely grim. Maybe the IMF projections will be a wake-up call. Perhaps this and general discontent with the way the country is being run may offer opportunity (too late for me) in the round of elections around 2020 or 2026 for serious change.

Perhaps, by then, the constant quest for growth and its costs will be called into question, concern with the destruction of the environment will finally become evident even to the most dull-witted,  and we might be able to stop or at least slow down the destruction at the eleventh hour.

Perhaps, by then the never-ending cycle of meaningless wars will lose their appeal and people will finally understand the horror of nuclear weapons and get them under control.

As it finally sinks in that the country that is running the world hardly knows where it is, some form of general education might even be tried again. It was very exciting in my younger years — what Presidents James Conant did at Harvard and Robert Hutchins did at Chicago were far from enough but they had at least a short-term effect.  If restarted with an incentive like the GI-bill, they might be of enormous value not only to America, but to the world, since America is in effect still running it.

Minimum standards of decent living might come to be considered normal.  Perhaps some of the people who go to bed hungry every night might be able to get better nutrition; malaria, bilharzia, dysentery etc. might be diminished. The earth could be cleaned up: forests replanted and not destroyed; the sea and the balance of ice to warm lands returned… But is that possible? Even a serious  attempt would change the outlook of us all.  It would be worth waiting for.

But the opposite course of events seems to me more likely.

It appears from what I read that it is, unfortunately not the young but the (too) old, like me, who worry about the future.  I am certainly out of touch with the young, but my impression is that among other evidence of our society pulling apart, two generations after me, young people are not thinking of the long term or of the common good but only of the moment and individual gain.  Perhaps young people in New England and on the West coast are meaningfully engaged but if one looks at what most of what younger people are studying and/or are engaged in doing, it is all about commerce – how to make a buck without getting one’s hands dirty – with very little or no attention to the humane arts and perhaps even less to civic affairs.  Are today’s teenagers more likely than my generation to get us out of the hole we have been digging?

I cannot judge them; perhaps there is fire in the ashes, but it has been a long time since I saw the emergence of any serious thinkers, much less statesmen.  To me, the clearest sign of the change in our approach to public affairs is that the job of leadership (which is really the job of education) has been long since been redefined as “followership.”  The “statesman” is the man who correctly reads the public opinion polls.  The herd is leading the wrangler. That usually is a recipe for a stampede.

I don’t see disaster happening quickly, but the signs all point downward. Unless serious moves are made for change – that is unless we stop heading in the direction we are now going – it seems to me not unlikely that within the span of a life like mine we can predict:

● discontent will lead to some form of fascism with a “guided democracy” government manipulating a mass movement;

● society will be told that difference means dissidence; so apartheid will be equated with security;

● even the word “privacy” will seem old fashioned.  It will take its place along side of “gosh” and “geewhiz”  as something people used to say;

● growth will continue to be sought but be redefined by sectors so that the charts look good while the middle class and the poor merge and are kept happy with bread and circuses;

● the environment will be written off — “too bad but nothing to be done.  It is too late now” – and those who can afford it will move to the better located areas or go indoors to climate controlled gated communities;

● automated defensive walls will be employed and waterways mined to keep the South of the world from invading what is left of the North;

● hit squads, drone bombings, “decapitating” dissident movements will not stop anger and frustration so it won’t be much fun to venture out-of-doors to shop, go to the cinema or eat in restaurants, much less to get on airplanes or trains and go anywhere else; while …

● frequent and senseless wars will justify taxes and levies that will keep the poor in their proper places and justify the concentration of money; and on and on….

Let us hope that all of these are just phantoms, but if there is even a single percent of danger that any of them could come about we should not just think but take action now. Can we not consider the dangers and wake up in time?

To prepare the materials for one of the books I did not write, I read memoirs of the rich and famous in the south of France in the 1930s.  What we are seeing today in he US and in England jumps out of those pages … the future looked grim then, too.  It was. Even the rich and careless got hurt.