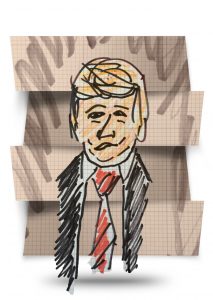 Doug Bursch is a writer and speaker. He also pastors Evergreen Foursquare Church in Auburn, Washington.

Character doesn’t pivot; it develops over time. Politicians can certainly quickly change their strategy or shift the focus of their campaigns, but they can’t suddenly shift the essential nature of their being. In other words, Trump might begin to act consistently presidential on Twitter and keep to a measured, sane cadence while reading his teleprompter script, but this “pivot” will not change what inherently makes him an extremely problematic candidate for President. Trump might be able to change how he stylistically presents himself for a couple months, but he will be unable to pivot from his hardwired personality.

Although Trump seems convinced that his detractors have been swayed by the mainstream media, I have been negatively influenced by his actual words and behavior. Case in point: Trump’s Twitter feed. In the last couple days, it looks like Trump is finally succumbing to using his Twitter feed for presidential candidate purposes. However, up until about two days ago, his feed had been primarily a daily confirmation that he does not have the moral character or mental stability necessary to be entrusted with leading our nation, particularly when it comes to having access to nuclear codes and other weapons of mass destruction. I do not write this with any malice or to be provocative, but just from reading Trump’s Twitter feed I would not feel comfortable allowing him to lead any area of our government or any area of the church I serve.

He consistently dehumanizes people with bullying language and perpetually engages in tangental Twitter battles that make it appear he is more concerned with defeating CNN and the New York Times than Hillary Clinton. On many days, Trump’s feed spent far more time fighting with the media than actually giving any semblance of detail concerning any of his policies or plans. His need to defend his ego with childish, bombastic exaggerations often made his Twitter account appear as if it was a poorly written parody. Yet, to my dismay, I would note the authenticating checkmark by Trump’s name, proving the seemingly unimaginable.

If someone wants examples of his absurd, consistently narcissistic behavior, just read his Twitter feed from pretty much any and every day except this week. I guess this week, when it comes to social media, he decided to pivot. We will see how long this pivot lasts. Regardless, it doesn’t remotely matter. You can’t change character with a pivot!

I’m a pastor and I believe in the power of repenting, apologizing and starting over. I have seen lives radically change when people take their faults, failings and sins seriously. I’ve partnered with individuals as they’ve taken their first steps towards sobriety or finally admitted to their family and friends that they needed to radically change their ways. People can certainly grow and develop when it comes to profound character issues. However, they don’t just wake up one day radically transformed from a simple pivot. Especially if their character issues are possibly the fruit of severe psychological or mental instability.

Sadly, I’ve encountered many people who try to con or short circuit the path of character development. You can tell everyone you’re going to do a better job, but it is going to take more than reading carefully from a teleprompter to deal with what’s profoundly broken. True change takes true recognition of our faults, true repentance and true time to figure out how to live in a way that is truly different. There is nothing in Donald Trump that has demonstrated this kind of awareness concerning what is fundamentally flawed in his candidacy: his character. Whether or not he esthetically pivots, Trump’s character will remain very much the same. Just as the marriage doesn’t stop the womanizer from womanizing, the presidency will not stop Trump from expressing his narcissism. However, the consequences of his narcissistic personality will be far more dangerous to the world if he is elected.

This is what is so absurd about the pivot prognostications of the press. Most rational human beings realize that Trump’s character is not changing, regardless of whether or not he is changing his tactics. Yet, there seems to be some strange comfort voters are supposed to draw from Trump suppressing his character to get elected. What is troubling about Trump is not what he says, as much as who he is. Who he is won’t change with a carefully orchestrated shift in how he presents himself. Character changes over time, when individuals are aware that their character needs to change and are willing to give their best effort to do whatever it takes to become better human beings. It does not appear that Trump has either the self-awareness or desire to pursue such a goal. Regardless, he certainly does not have enough time to develop the character necessary to be the next President of the United States.