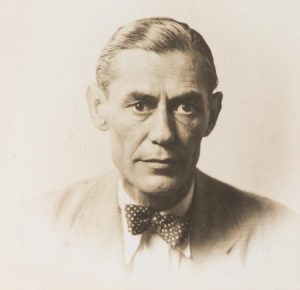 Mike Jay delves into the personal papers of one of the first ‘media psychiatrists’ of the 20th century. 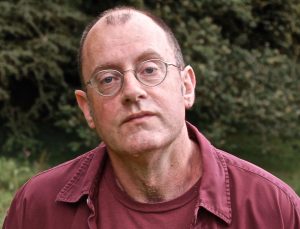 In some respects, Sargant was a distinguised establishment figure. He was co-author of ‘An Introduction to Physical Methods of Treatment in Psychiatry’, the standard textbook on the subject from the 1940s right through to the 1980s. His theories were cited approvingly by Bertrand Russell and Aldous Huxley, and he was a regular newspaper columnist and guest on television discussions.

In other respects he was an outlier who became famous, and notorious, for his extreme ideas and treatments. His clinical career culminated in ‘deep narcosis’ treatments where patients were sedated and given ECT (electro-convulsive therapy) for weeks on end. Many patients believe they were permanently damaged by these treatments and their campaigns to make the records public, still ongoing, have cast a long shadow over his reputation. By this time he was well known for his public pronouncements that young people were being brainwashed en masse by drugs, pop music and “ecstatic dancing”. 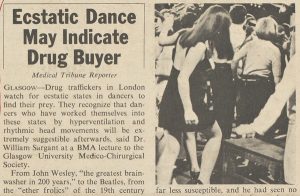 From the moment when Sargant began practising in 1934 he placed himself at the vanguard of the new physical therapies. In his memoir ‘The Unquiet Mind’ he writes movingly of the patients “put away for life” in the old asylums and his determination to find cures for their conditions. He was an early adopter of ECT and leucotomy, and during World War II treated victims of combat shock with ‘truth drug’ injections, encouraging them to relive their traumas. 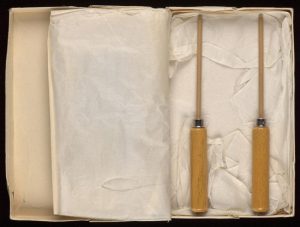 After the war he discovered the work of Ivan Pavlov and developed his theory of brainwashing and mind control, arguing that in moments of heightened emotional stress an ‘abreaction’ occurs, during which the mind can be reprogrammed. While recuperating from tuberculosis in Majorca he met the writer Robert Graves, who helped him turn his theories into a bestselling book, ‘Battle for the Mind’. (Sargant’s extensive correspondence with Graves is one of the highlights of the archive.) 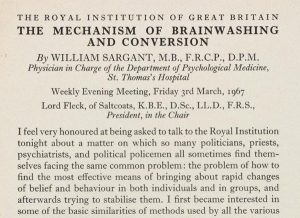 ‘The mechanism of brainwashing and conversion’, reprint of an article in the ‘Proceedings of the Royal Institution’, March 1967. Wellcome Library reference: PP/WWS/G/4/7.

Sargant developed a lucrative private practice on Harley Street and travelled extensively, extending his theories on mind control beyond the psychiatric sphere. He believed that the brainwashing techniques he had discovered were ancient and widespread. He observed possession rites in Haiti and Africa, and studied contemporary magicians such as Aleister Crowley. He wrote a book recounting his discoveries, ‘The Mind Possessed’, on which he collaborated with Richard Cavendish, historian of the occult and editor of the popular journal ‘Man, Myth and Magic’. 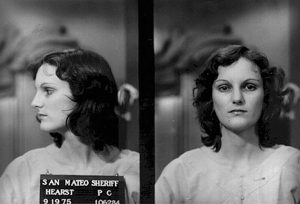 In his final years Sargant came to believe that the future of civilisation was under threat from phenomena such as mass media, popular culture and drugs, all of which were vulnerable to hidden manipulators. One of his last writings was a witness statement for the defence in the 1975 kidnap trial of Patti Hearst in which he argued that she had, in her overstressed state, been powerless to resist brainwashing and reprogramming by her terrorist captors. But by this time such ideas seemed like a relic of the Cold War. The jury were persuaded by the prosecution that Hearst, a modern, priviliged and self-fashioning individual, had chosen her new terrorist identity voluntarily. The brainwashing defence was abandoned and Sargant was not called to the witness box.