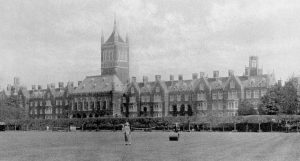 The travel writer Bill Bryson recorded that Virginia Water, the home to Holloway Sanatorium, had a charm about it because “it was full of wandering lunatics”. Bryson worked at the sanatorium in 1973 as a janitor on Tuke Ward. In his book, Notes From A Small Island, he describes the ward as home to “long-stay male patients in a state of arrested insanity”.

According to Bryson, the place was one of the most extraordinary communities in England. The patients were allowed to wander freely down to the shops and back, mingling on equal terms with the locals, who affectionately referred to the institution as “the sanny”.

A remarkable view into the lives of psychiatric patients at Holloway Sanatorium can be found in the recently digitised patient case books. The health of each patient is carefully logged over the period of stay at the hospital. Intermittently spanning the years 1885 to 1926, the case books record changes in varying degrees of mania and behaviour.

Holloway Sanatorium was opened in 1885 as a hospital for the paying middle classes. Founded by businessman and philanthropist Thomas Holloway, he commissioned architect William Henry Crossland to build an elaborate Gothic hospital in Virginia Water, Surrey. Set in 22 acres of lush parkland, the asylum was located to be visible from the nearby train station.

In the Psychiatric Bulletin, 1997, psychotherapist Jane Knowles writes that the design of the sanatorium was based on the French idea that plain walls were obnoxious to the mad. Every inch of wall was “richly decorated including portrayals of small devils amidst the florid design”.

Voluntary boarders often resided at the asylum. “They like the place and stay there a good deal cheaper than in lodgings” reasoned the medical superintendent, Dr Sutherland Phillips, in 1897. Yet, the freedom with which the boarders were permitted to come and go could sometimes lead to tragic consequences.

A cutting from the Daily Telegraph pasted into a case book relates the sad episode of Mr John Mead, a former preacher, who had taken to drink. He was an untidy but otherwise healthy patient who enjoyed going on long walks. On one of his excursions, he was sitting near the level crossing at Virginia Water. Seeing an oncoming train, he ran onto the tracks and was killed. His was not the only suicide; the coroner at his inquest concluded that “not enough supervision was paid to those with suicidal tendencies”.

The case books contain photographs of patients, giving an indication of their physical states. One such portrait accompanies the notes of patient Hélène Marguerite: “She obstinately resisted everything that was done for her about this time … her arms were generally in a state of extreme muscular tension”.

Among the patients, seizures were a common complaint and treatment was often in the form of sleep-inducing bromides and chloral. For conditions in which a stimulant was thought to be the appropriate treatment, strychnine was administered. It could only be given in very small doses because of its high toxicity.

In the case of Reverend Dennis Moore, a course of strychnine seemed to do the job. He left the asylum “highly benefitted by the social evenings and the agreeable companions he associated with (both ladies and gentlemen) during his months stay”.

For the majority of patients, gentle pastimes occupied them throughout the day. Among the female patients, knitting was the norm. Caroline Newman, a former teacher of music, is described as amusing herself “making ludicrous rag dolls”. By contrast, a male patient is noted as “never occupying himself in any way“.

By the 1970s, the Holloway Sanatorium was approaching the end of its long life as a psychiatric hospital and it finally closed down in 1980. The building was eventually bought up by property developers and converted into luxury houses and apartments.

The digitised case notes preserve the building’s history, revealing more fascinating and poignant stories of past lives within its old Victorian walls.