Winning seven out of eight most recent contests, says Sanders in victory speech, proves that ‘momentum’ of his campaign can no longer be ignored 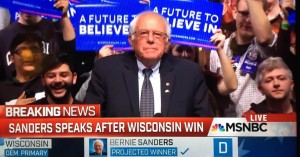 “The corporate media and political establishment keep counting us out,” declared Sanders after winning Wisconsin, “but we keep winning states and doing so by large margins. If we can keep this up, we’re going to shock them all and win this nomination.” (Image: Screenshot/MSNBC)

“If we can keep this up, we’re going to shock them all and win this nomination.” —Bernie Sanders

Less than an hour after polls closed in Wisconsin on Tuesday night, major news outlets called the night a victory for Bernie Sanders – the latest in a string of recent wins.

As of this writing, with approximately 88% of precincts reporting, CNN reported Sanders winning with 56.2 percent of the vote compared to rival Hillary Clinton’s 43.5 percent – a double-digit margin.

Out of the last eight contests, it is the seventh win for Sanders. With the final delegate distribution not yet settled in Wisconsin (which has a total of 86 delegates up for grabs), the win will certainly narrow Clinton’s overall lead. According to AP’s delegate tracker just after midnight, Clinton now leads Sanders 1,274 to 1,025 in pledged delegates.

“Wisconsin,” declared the Sanders campaign in a tweet, “today you sent a strong message: when we stand together there is nothing we cannot accomplish. Thank you!”

And in an email sent by the campaign shortly after, Sanders added, “The corporate media and political establishment keep counting us out, but we keep winning states and doing so by large margins. If we can keep this up, we’re going to shock them all and win this nomination.”

Subsequently, to a crowd of raucous supporters in Laramie, Wyoming—where voters head to the polls this Saturday—Sanders said that Tuesday’s victory in delegate-rich Wisconsin proves the momentum of his campaign has the requisite energy to win crucial upcoming contest in New York on April 19 and those beyond.

“We have a path toward victory, a path to the White House,” Sanders told the crowd as he described the importance of “momentum” that comes not from the top down, but from the bottom up.

“Momentum is starting this campaign eleven months ago and the media determining that we were a ‘fringe’ candidacy. Momentum is starting the campaign 60 to 70 points behind Secretary Clinton,” Sanders said. “Momentum is that within the last couple of weeks there have been national polls that have had us one point up or one point down. Momentum is that when you look at national polls or statewide polls, we are defeating Donald Trump by very significant numbers, and in almost every instance our margin over Trump is wider than Secretary Clinton’s.”

Sanders noted his string of recent victories, thanked the voters of Wisconsin for their strong support, and put the nature of his grassroots campaign in the historical context of other movements that upended the status quo against great odds.

As he neared the end of his speech, Sanders turned his attention to New York—where he said Clinton was getting “nervous” over the battle for voters in that state—but also big western states including Oregon and California where said he had an “excellent” chance of winning.

After that, Sanders said, “I think a lot of these superdelegates are going to be looking around them and asking, ‘Which candidate has the momentum? Which candidate is bring out huge numbers of people? But we will win in November, if there’s a large voter turnout.’ That’s what always happens – Democrats and progressives win when there is a large voter turnout. Republicans win when people are demoralized. This campaign is giving energy and enthusiasm to millions of Americans.”