More than a decade late, FDA finally catches up with current medical practice and years of scientific evidence 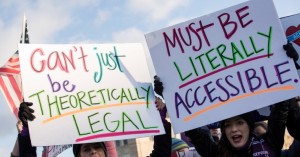 “This label change will dramatically expand access for women not only in Texas, but throughout our clinics nationwide.” (Photo: File)

In a development lauded as “a significant advancement for women in the United States,” the Food and Drug Administration (FDA) on Wednesday announced the approval of an updated label for mifepristone, which is used for medical abortion.

The updated label, said reproductive health experts, is “more closely aligned with evidence-based medicine” and expands access to medical abortion by allowing the drug to be prescribed at lower dosages, later in pregnancy, and without additional trips to the clinic.

This effectively codifies the protocol that physicians have been using for more than a decade—and it undermines a key tactic used by right-wing legislators to erect medically unnecessary barriers to abortion care.

The “new” regimen, according to the FDA website, is:

“Because providers in the United States have already been providing evidence-based care, which the new label now recognizes, actual practice will not change,” said National Abortion Federation president and CEO Vicki Saporta on Wednesday.

“What will change is that politicians can no longer deny women access to this safe and effective method of early abortion care by insisting on an out-dated regimen,” she said. “We hope the new label changes will soon allow women to access medical abortion care in states where anti-choice restrictions have made this evidence-based care unavailable.”

As ThinkProgress explained, in their quest to chip away at reproductive rights from all angles, anti-abortion lawmakers have been “quick to exploit the discrepancy between the official FDA label and the real-world medical practice.”

By passing laws that forced doctors to stick to the outdated FDA method of prescribing the drug, these legislators were able make medication abortion “unnecessarily costly and nearly impossible to access,” said Chrisse France, executive director of the Ohio women’s healthcare provider Preterm.

In Texas, for example, prior to the passage of the controversial anti-abortion bill known as HB2, 40-50 percent of patients at the clinic network Whole Woman’s Health chose medication abortion, according to the organization’s president and CEO. The law—currently being considered by the U.S. Supreme Court—shuttered dozens of clinics across the state, making the FDA’s requirement that medication abortion patients make two separate doctor visits particularly onerous.

“Since HB2 went into effect, that figure has decreased dramatically,” said Amy Hagstrom Miller on Wednesday. “For the past two years only about 5 percent of the women we serve in Texas have been able to get the medication abortion care they wanted because HB2’s barriers were insurmountable. This label change will dramatically expand access for women not only in Texas, but throughout our clinics nationwide.”

A similar effort is currently underway in Arizona, where state lawmakers just last week approved a bill that said doctors could use the drug to induce an abortion only according to the 15-year-old labeling.

As such, ProPublica reporter Nina Martin noted on Twitter, the new FDA rule is “a huge blow to efforts in Texas, Arizona, Ohio & elsewhere to eliminate medical abortions.”