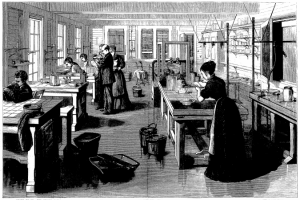 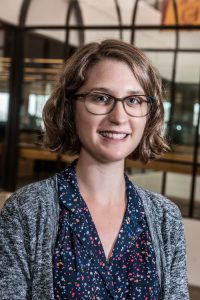 The Museum of Comparative Zoology (MCZ) at Harvard University hired Elizabeth Hodges Clark as a specimen sorter in 1873. The energetic Swiss naturalist Louis Agassiz founded the MCZ in 1859 as a center for natural history teaching, research, and exhibition in the United States. After his death in 1873, his son Alexander Agassiz took over the directorship and dedicated his immense copper mining fortune to the museum’s development. Natural history as a scientific enterprise became big business at the turn of the century. Museums like the MCZ amassed barrels and boxcars of specimens from the around the world, and turned to cheap labor to process their bounty. Women museum assistants such as Elizabeth Hodges Clark provided the labor foundational to natural history: the routine, messy, and tedious sorting, labeling, and organizing of specimens.

Clark accepted a job at the MCZ as a “sorter and classifier of marine specimens” at the age of eighteen without any prior scientific training. At the museum, Clark worked with the naturalist Theodore Lyman, known for his enthusiasm for the natural sciences and his military service in the Union Army during the Civil War. In an unpublished 1982 manuscript from the MCZ Archives, Clark’s great-niece Elizabeth Hodges Clark Beeuwkes recalled her great aunt’s descriptions of the “great barrels” of specimens from the “collecting expeditions in the South Seas” and the “long counters on which the slimy specimens lay” in the museum. According to Beeuwkes, Elizabeth Lyell Anthony, a senior museum assistant hired in 1869 who worked for the MCZ for fifty years, would stand over the young Clark and say: “Do not take off your apron before the bell rings” and “Do not let Mr. Lyman see you sitting down.” (1) Women specimen sorters worked within a gendered hierarchy of labor, with male naturalists like Lyman setting the processing priorities and women assistants at different levels overseeing daily tasks.

Alexander Agassiz was the clear patron and director of operations within the labor ecology of the MCZ. Underneath Agassiz, male curators, or “assistants in charge,” supervised the development of specific collections. Many of these curators, like Lyman, were trained by the inimitable Louis Agassiz, independently wealthy, and engaged in the natural sciences as one of their many public-facing roles in Boston. At the bottom of this hierarchy were male janitors, often immigrants from the UK and Europe, taxidermists, and women assistants. They processed incoming collections, mounted objects for exhibition, and tackled the never-ending problems of storage and maintenance. Curators relied on them to make the MCZ’s unruly intellectual currency – specimens– legible to an international community of naturalists.

In 1880, after learning enough to become a reliable source of labor and expertise in natural history, Clark accepted a promotion as Alexander Agassiz’s personal secretary. Her salary figures remain unknown, but as evidenced in census records, Clark’s job allowed her to become the head of her household. She supported her widowed mother and four young nieces and nephews and employed two servants in her home on Garden Street in Cambridge. (2) Clark’s rise from poorly paid specimen sorter to private secretary reveals the significant role women played in the scientific management of museums during this period.

Between 1880 and his death in 1910, Agassiz delegated more and more of his responsibilities to Clark, especially while he traveled to his Michigan copper mines or sailed around the world doing oceanographic field work. Clark’s proximity to Agassiz challenged the gendered labor structure of the MCZ. She managed his correspondence, made financial and administrative decisions during his absence, and proofread his scientific publications. For instance, while Agassiz was abroad in 1891, the MCZ ornithologist William Brewster wrote to Clark asking whether valuable museum specimens should be lent to a military-naturalist out West:

“If he [Agassiz] has gone it will be a great favor if you yourself will take the responsibility of deciding whether the specimens should be lent to Dr. Means or not … . I should hardly venture without your emphatic approval to lend a type and other valuable specimens on such a long journey.”

Brewster and Clark regularly corresponded, consulting each other about purchasing choice specimens for the MCZ’s exhibitions such antelopes and African elephants for the new African room and a European Brown Bear from Switzerland. Clark anticipated Agassiz’s reactions to these investments as well as to museum disputes. Writing to Brewster in 1892 about a kerfuffle involving unsanctioned use of the bird collection by Harvard undergraduates, Clark included Agassiz’s letter on the subject, stating “[t]his [is] practically what I wrote on my own responsibility the other day.”

In the surviving letters from the Agassiz/Clark correspondence in the MCZ Archives, it is clear that they had a close working relationship and that Clark, like many secretaries, knew Agassiz’s mind. For example, in 1894 Agassiz read in the morning paper about the American Museum of Natural History’s appropriation of $1,500,000 from the city of New York. Agassiz wrote despondently to Clark:

“[But our museum looks] as if we might as well shut up shop! Certainly it is of no earthly use to attempt any thing in Camb[ridge] beyond the smallest kind of University Museum with our means. [M]y plans are simply absurd and what has been once is a waste of funds … . As I have often said before what a d[amn] f[ool] I have been.”

Agassiz’s tone is emotional and intimate. He relies on their shared understanding of his family’s history with the museum (especially his frustrated promise to fulfill his father’s ambitious vision for the institution) and Clark’s awareness of the increasingly prestigious urban natural history museums.

Clark not only shared in Agassiz’s resentments, she also adapted her life to his geography. So crucial was she to Agassiz’s work that, in a somewhat unusual arrangement, Clark spent her summers installed in the tower room of Agassiz’s summer home in Newport, Rhode Island correcting proofs of his publications. In the late 1890s, Agassiz suggested that Clark ought to build a home in Newport, offering to furnish it on her behalf so she could remain nearby in the summers. A rare contemporary description of Clark from 1895 comes from the zoology graduate student Herbert Spencer Jennings, who wrote to his soon-to-be fiance about meeting Clark in Newport while doing research at Agassiz’s private marine laboratory: “Miss Clark is very bright and interesting … . And as Mr. Agassiz’s secretary she has come in contact with many famous and interesting people, and is a most interesting talker.”(3) Jennings portrayed Clark as a lively force to be reckoned with, especially compared to the two duller ladies he interacted with at dinner.

By the end of Agassiz’s life, Clark had become indispensable to his scientific and administrative work. In 1910, Agassiz died on the steamship Adriatic on his way home from oceanographic research in the Mediterranean. When his will was made public, listed after his bequests to Harvard University and the American Academy of Arts and Sciences was a substantial inheritance for his private secretary. The New York Times reported, “Miss Elizabeth H. Clarke of Cambridge, Mass., secretary of Prof. Agassiz receives $25,000 outright, and $5,000 a year for life.” (4) This sum was more than double that given to Agassiz’s two long-term male servants. Additional reporting by the Boston Transcript amended the figures upward. The “very quiet and unassuming” Clark would actually receive $25,000 and an additional annuity of $10,000, more than five times the amount Agassiz left to his own daughter-in-law. (5) Such a legacy allowed Clark to retire comfortably and, for the first time, to have her activities noted in the gossip pages of regional papers like the Boston Daily Globe.

Clark’s role at the MCZ gives us a window into the widespread employment of women in scientific institutions during the nineteenth and twentieth centuries. Like the exhausting classificatory work of women computers in astronomy and the endless dictation and writing support of women amanuenses in quantum theory, this labor was feminized. These were low-skilled jobs with meager salaries that conformed to gender appropriate narratives, which associated science with masculinity and the housekeeping roles essential to science with femininity. As Clark’s history reveals, despite these limitations, women assistants were very good at their jobs, leveraging their expertise to circumscribed positions of power.

It is almost impossible to find Clark’s name in published records about the MCZ. Yet, evidence of her decision-making about the future of the museum emerges in unpublished correspondence, marginal notes, and verdicts about which specimens to purchase and put on display, who to hire, and how to manage access to the MCZ’s collections. The most bittersweet confirmation of Clark’s power occurred after Agassiz’s death. His successor Samuel Henshaw barred Clark from returning to the museum, deliberately trying to erase her almost four decade history with the institution. But he didn’t succeed. As soon as you start digging into the MCZ’s archives, evidence of Clark’s legacy is everywhere.

*All archival correspondence is cited by permission of the Ernst Mayr Library, Museum of Comparative Zoology Archives, Harvard University.