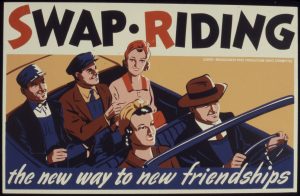 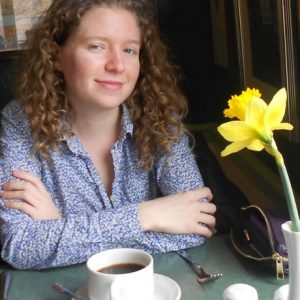 Among the many propaganda campaigns executed during World War II was this one, aimed at encouraging carpooling. 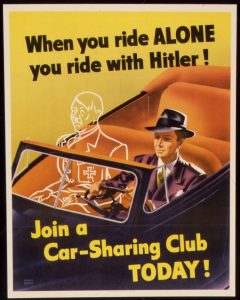 Using a mix of scare tactics (“When you ride alone, you ride with Hitler”), sex appeal (“Swap riding–the new way to new friendships”), and patriotism (Uncle Sam wagging his finger), the campaign encouraged Americans to carpool in order to conserve fuel and other supplies for the war effort.

We know that car ownership was on the rise during World War II and skyrocketed afterwards. It seems that the American government didn’t think it would be feasible to ask people to give up their cars altogether and walk or bike instead, so this propaganda campaign settled for promoting car-sharing. 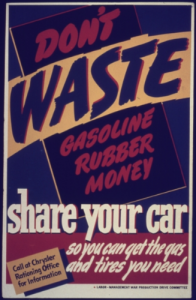 It’s also possible that the government didn’t want to risk a downturn in car sales altogether for the sake of its own markets; rather, it just wanted a temporary decrease in car usage. 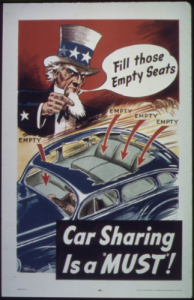 It’s clear from these posters that driving was already ingrained and celebrated as an American activity. In fact, the bottom righthand poster, has an invitation to “Call the Chrysler Rationing Office for Information,” showing the hand the car companies played in all of this. While they may have decreased their private car production in order to allow for weapon and war vehicle production, they were taking advantage of this PR opportunity to advertise their patriotism, and biding their time until they could spring on the American car market again.

Originally published by Strong Towns under the terms of a Creative Commons Attribution-ShareAlike 3.0 Unported license.