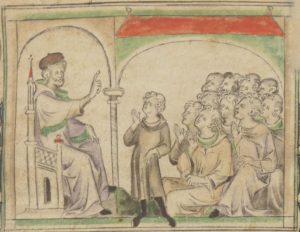 Back in the Middle Ages, as well as speaking English and Latin, many people living inBritain also spoke French. 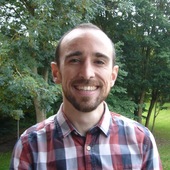 The study of modern languages in British secondary schools is in steep decline. The number of students taking French and German GCSE has more than halved in the last 16 years. But as the UK prepares to forge new relationships with the wider world, and with a question mark over the status of English as an official EU language, it may be that many more Britons will need to brush up on their language skills – not unlike their medieval ancestors.

In the Middle Ages, a variety of vernacular languages were spoken by inhabitants of the British Isles, from Cornish to English to Norn – an extinct North Germanic language. The literati of the time learned to speak and write Latin.

But another high prestige language was also used in medieval Britain. After the Norman Conquest, French became a major language of administration, education, literature and law in England (and, to some extent, elsewhere in Britain). To get ahead in life post-1066, it was pretty important to “parler français”. 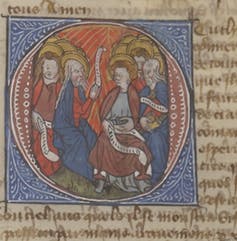 French would have been the mother tongue for several generations of the Anglo Norman aristocracy. But many more Britons must have learned French as a second language. Medieval biographies of saints, such as the 12th-century recluse Wulfric of Haselbury, tell of miracle workers who transformed monoglot Englishmen into fluent francophones.

In reality, many probably acquired French at “song” school, where young boys were taught reading and singing before moving on to study Latin at “grammar” school.

But, by the late 14th century, standards of French in Britain were slipping – at least in some quarters. Perhaps not such a problem at home, where English had already assumed some of the roles previously performed by French. But if British merchants wanted to export wool, or import bottles of Bordeaux, knowledge of French was still a must.

It’s around this time that the “Manieres de langage” – or “Manners of Speaking” – began to appear. These model conversations, the earliest used to teach French to English speakers, were used by business teachers who taught all the necessary skills for performing basic clerical work.

As well as teaching learners how to ask for directions and find lodgings in France, the “Manieres” feature rather more colourful language than you’d find in today’s textbooks.

Some of the dialogues are made up entirely of insults and chat-up lines. Learners could quickly progress from “Mademoiselle, do I know you?” to “You’re quite sure you don’t have another boyfriend?”. And if things didn’t quite go to plan, an expression such as: “Va te en a ta putaigne … quar vous estez bien cuillez ensemble” (That’s it, run along to your whore! You’re made for each other!) may have proved useful. 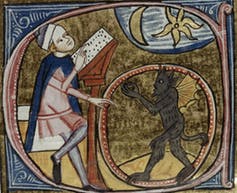 The “Manieres” also taught learners about life across the Channel. In one dialogue a Parisian chap mentions to an Englishman that he’s been to Orléans. The Englishman is amazed: “But that’s near the edge of the world!” he exclaims. “It’s actually in the middle of France,” replies the Parisian, “and there’s a great law school there”. Once again, the Englishman is taken aback. He’s heard it’s where the devil teaches his disciples black magic. The Parisian is exasperated until the Englishman offers to buy him a drink.

Lessons from the past

The French spoken in Britain was mocked from at least the 12th-century, even by the British themselves. In the “Canterbury Tales”, for instance, Chaucer teases his Prioress for speaking the French of “Stratford-at-Bow” (rather than proper Parisian).

Like many a language learner in Britain today, the Englishman in the “Manieres” lacks confidence in his linguistic abilities and worries about how he is ever going to speak like a native.

But the “Manieres” also suggest there was less separating the French of Britain from “proper Parisian” than we might think. When the Englishman lets slip he’s never actually been to France, it’s the Parisian’s turn to be amazed. How could anyone learn such good French in England? 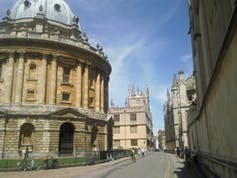 Catte Street, Oxford, where a business school was located in the 15th-century. Photo © Marathon (cc-by-sa/2.0)

These language learning resources date from a time when the association between linguistic identity and nationality was looser than it often is today. French doesn’t just belong to the French, according to the “Manieres” – learners can take pride in it too.

In Oxford, business school French proved so popular its success seemed to rattle the dons. In 1432 a University statute banned French teaching during lecturing hours to stop students skiving Latin.

It’s hard to imagine needing to curb enthusiasm for learning a foreign language in Brexit Britain. But perhaps there are lessons in the “Manieres” that could help promote language learning in the 21st-century classroom.