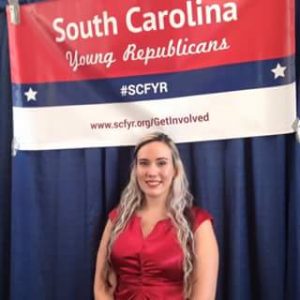 Resigning as Communications Chair from YRNF

To my dear friends at the Young Republican National Federation:
Regretfully, I am resigning from my position as Communications Chair with the YRNF. With the practically fulfilled nomination of Donald Trump as our presidential candidate, I can no longer continue to carry out the duties of this position. My principles will not allow it.
For now, I will continue to serve as International Outreach and in my South Carolina Chair position. I want to continue to work in the Republican cause, supporting conservative ideals and helping to elect down ballot candidates.
I call on other YR leaders to prayerfully consider their own positions. There is no easy answer to the situation our party is in, but I believe we would do much more for our country by standing together against Donald Trump. We have been told for years how we are the future of the party, this is our opportunity to seize that future. But if we have instead decided to uphold a man who does not represent us or our views — a man that has belittled war heroes, explicitly stated misogynist beliefs, relied on intimidation of minorities, insulted our international allies, rewarded violence, championed divisive rhetoric and proved completely uneducated in conservative fiscal policy — I cannot participate in that. When each of us decided to get involved in politics, we all hoped to change our county, our state, our nation for the better. We sit on the edge of history now, a choice to be made.
As the head of our national communications my voice is part of our message, and I am intrinsically tied to it. Therefore I must step down. I cannot live with being seen as supporting a candidate I truly feels tramples on all of our values. Even if we, as an organization, focused exclusively on congressional candidates, we would still be seen as complicit. It would be impossible to resist the pressure to push for a straight-R ticket when we campaign.
The role of the Communications Committee is to reach our members and the public with our positions in support of our parent party. Unfortunately, the RNC has decided to embrace this candidate as our standard-bearer. So every press release, every tweet that does not denounce Trump will be seen as capitulating to the GOP. Our social media accounts have already seen messages from people announcing their support of Donald Trump and invoking our organization. I cannot be part of that. No matter how loud I am in my renouncement of Trump, my title will still betray me. I want no part of a racist, fascist, hateful presidency.
I joined this leadership team to change the game headed into this election. I wanted Young Republicans to be part of the conversation about the White House, to be seen for all the hard work we put in year after year to elect Republicans. But I never could have imagined this outcome. And I cannot use my skills, or implement the plan I laid out for 2016, without feeling like I am losing my soul.
Many of you may choose to support Trump in order to beat Hillary Clinton, that is your decision. For me, I cannot support a candidate who endorses bigotry and lawlessness, with a minimal understanding of the fiscal policies long associated with our party, even if he does have an “R” after his name. I could not later tell my children I did the right thing, instead I would have to live with allowing my politics to be corrupted. I cannot stand by and continue to write newsletters and posts that so strongly conflict with my personal values. I will not surrender my beliefs.
This is not the way forward. I will not quietly fall in line. I will not give up my principles.
I will always be ‪#‎NeverTrump.