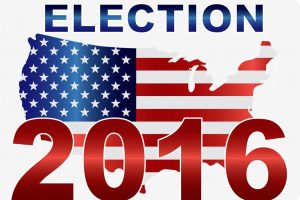 You can see the state-by-state polling averages to this date, 11/01/2016, at the bottom.  270 Electoral votes are needed to win the presidency.

If the election ended with with each candidate winning the states per those averages, Clinton would become president with 305 to 233 Electoral votes.

If we take all states polling at 5% or less advantage to either candidate and make them current toss-ups with neither candidate winning at the moment, Clinton still becomes president with 275 to 173 Electoral votes.

Obviously, this means that Clinton can lose every toss-up – all battlegrounds – and win the presidency.  She has to do absolutely nothing other than hold what she’s got while Trump absolutely must win every toss-up.

If Trump wins every toss-up, which is highly unlikely, he would still be short with a Clinton victory of 275 to 263 Electoral votes.

While the FBI release seems to have only slightly narrowed Clinton’s national poll leads, the affect across all state polls – where it matters as we do not elect the president on a popular vote – has been minimal to non-existent.

Trump is this week where he was last, and he will likely be next week where he is now – needing to climb a very, very steep hill.  Clinton has a singular task – just hold where she is.