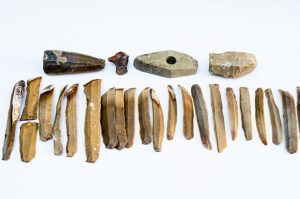 A set of 23 splits (each of them over 20 cm in length) from a single flint core prepared to be made into knives is one of the most interesting finds from the September 2016 excavations of the 6,500-year-old flint tool factory in Bulgaria’s Kamenovo. Photo: Razgrad Regional Museum of History

The 6,500-year-old Chalcolithic (Aeneolithic, Copper Age) workshop discovered last year in the town of Kamenovo in Northeast Bulgaria made its products employing a manufactory process in which different production phases were carried out by different people, the archaeologists excavating the site have concluded.

This conclusion is based on the second stage of the 2016 archaeological excavations of what seems to have been a prehistoric flint tool factory in Bulgaria‘s Kamenovo, Kubrat Municipality, Razgrad District, which took place on September 15-28, 2016, the Razgrad Regional Museum of History has announced.

The results from the September 2016 excavations of the Kamenovo flint tool workshop have confirmed the archaeologists’ earlier hypothesis: that the prehistoric venue employed manufactory production not unlike modern-day industrial manufacturing in that each Chalcolithic flint tool was not produced by a single craftsman but the specific production tasks for each individual tool were distributed among different workers with specific roles.

“In order to prove this [hypothesis], the excavation probes were divided into small sections of 1 square meter each. In each square, [the researchers] found different amounts of splits [i.e. unfinished products] of different sizes – from the largest fragments resulting from the initial processing of the flint cores to miniature flakes (1-2 millimeters) from the final phase of the processing of each single tool – the sharpening or the retouching,” explain the archaeologists in a release of the Razgrad Regional Museum of History.

“This means that the tools were not made by a [single] craftsman who would process them from beginning to end; rather, there was manufactory production with a clear distribution of the production tasks. One worker would split the cores, the blades would then be shaped elsewhere, and then would be whetted in still another place,” they elaborate. 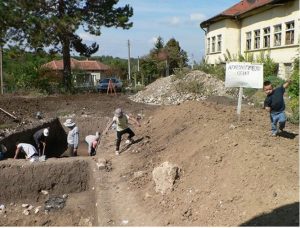 The prehistoric flint tool factory and the necropolis of its settlement have been discovered underneath the schoolyard of a now defunct elementary school in Bulgaria’s Kamenovo. Photo: Razgrad Regional Museum of History

Lead archaeologist Yavor Boyadzhiev’s other main hypothesis about the 6,500-year-old flint tool workshop in Bulgaria’s Kamenov is also said to have been confirmed: namely, that the prehistoric tools were produced not for local use but to be sold and “exported”.

The most interesting find from the latest excavations in Bulgaria’s Kamenovo is said to be a set of a total of 23 splits from a single flint core which were prepared to be made into knives.

Each of them is over 20 centimeters long, and they were discovered stacked together under one of the largest piles of flint stones in the Chalcolithic workshop.

The Museum also informs that a total of four burials from the necropolis of the flint workshop settlement have been found over the past archaeological season. In addition to the grave of the man with the stone scepter ax found in June, in September, the archaeologists discovered three child burials. The graves have been found in a layer lying just 40 centimeters beneath the surface.

Another notable find is a clay figurine depicting a female torso with open arms which is the second one of this type to have been found in Bulgaria’s Kamenovo since the prehistoric flint workshop was first discovered back in the spring of 2015. 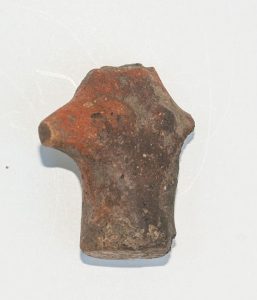 A clay figurine depicting a female torso with open arms has been the second find of its type since the Chalcolithic site in Kamenovo was discovered in the spring of 2015. Photo: Razgrad Regional Museum of History

The first stage of the 2016 excavations in Kamenovo was funding by the Razgrad Regional Museum of History, while the latest digs in September were funded by Bulgaria’s Ministry of Culture.