The air god Shu, assisted by other gods, holds up Nut, the sky, as Geb, the earth, lies beneath (950 BCE)

The Egyptian religion and belief were spread beyond the domain of Ancient Egypt.

Egyptian Mythology is the accumulation of myths derived from ancient Egypt from at least c. 4000 BCE to 30 CE. The end was marked with the death Cleopatra VII, the last of the Ptolemaic sovereign of Egypt. 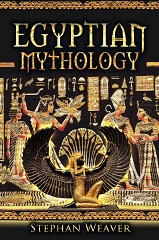 Often in Egyptian writing and art, myths occur— particularly in short stories and in religious materials such as ritual texts, hymns, funerary texts and temple decorations.  Full accounts of the myth from these sources are rare as they are habitually described in brief fragments.

The Egyptian religion and belief were spread beyond the domain of Egypt through trade, notably after 130 BCE when the Silk Road opened. This made Alexandria the epicenter of commerce. For other cultures, the imperative aspect of Egyptian Mythology was the eternal life after death concept, the reincarnation and benevolent deities. Both Greek philosophers Plato and Pythagoras are believed to be inspired by the belief of Egyptians in reincarnation. What’s more, religious cultures from Egypt were largely adopted by the Romans as they did from other civilization.

Natural surroundings greatly influenced the Egyptian myth. Annually, the Nile flooded the land to renew the soil’s richness and promote the prosperity of farming that was essential to the civilization of Egypt. Daily, the sun rose and set to bless the land with light and to watch over the activities of humanity. Thus, in the view of Egyptians, water and the sun were considered the emblems of life. They also viewed time as a chain of natural cycles. Low and high floods threatened the order of this cycle; they caused damage to the cultivation and buildings and brought about famine. The generous Nile valley was encircled by a severe desert that was inhabited by peoples who the Egyptians believed were savage foes who disrupted the order. As a result, they believed their area of habitation was one of stability, secluded from the rest.

To the Egyptians, humanity’s existence was believed to be only a tiny part in the journey to eternity. The deities and supernatural agents coordinated and ruled over the course of this voyage.

According to the historian Bunsen:

“Heh, called Huh in some eras, was one of the original gods of the Ogdoad [the eight deities worshipped during the Old Kingdom, 2575-2134 BCE] at Hermopolis and represented eternity – the goal and destiny of all human life in Egyptian religious beliefs, a stage of existence in which mortals could attain everlasting bliss (86).”

The existence of someone on this earth was a part of the eternal journey; it was also an introduction to something bigger. The concept of the afterlife for Egyptians was a mirror-world of one’s life on earth— particularly, one’s life in Egypt.  If one desired to enjoy the rest of his/her eternal journey, he was obliged to live that life correctly.

The Creation of the World

The creation of the universe and the world out of whirling chaos and obscurity was where the journey commenced. There was once nothing but infinite dark water, devoid of form or purpose. From this bedlam surfaced Ben-Ben (the primeval hill); atop of this hill lived Atum (sometimes, Ptah). Atum observed the emptiness and realized his loneliness. He bred with his shadow to produce two offspring: Tefnut (goddess of moisture, whom Atum vomited out) and Shu (god of air, whom Atum spat out). The principles of order were issued by Tefnut and the principles of life were given by Shu.

After they were born, the siblings set out to create the world, leaving their father on the Ben-Ben. After a while, Atum was overwhelmed by anxiety as his children took a long time to return. He took out his one eye and sent it to look for them. Much to his relief, Shu and Tefnut returned after some time with his one eye; Atum, grateful for his children’s return, shed tears of happiness. His tears rained atop the dark and fertile soil of Ben-Ben, thereby producing women and men. 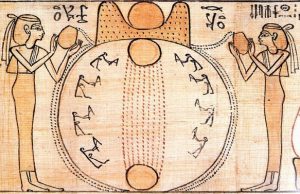 These early beings had no place to dwell, however. Tefnut and Shu, thus, mated and bore the goddess Nut (the Sky) and the god Geb (the earth). The siblings, Geb and Nut, became lovers, inseparable from one another. Unable to accept their unacceptable behavior, Atum took Nut into the heavens, far away from Geb. Both lovers had clear views of one another; however, they were unable to touch. Already impregnated by Geb, Nut gave birth to Set, Osiris, Isis and Nephthys— the prominent Egyptian gods. Osiris was often considered a sensible and thoughtful god which was probably why Atum gave him rule over the world.

Enjoyable tales and solemn hymns constitute the sources of Egyptian mythology. Illiteracy amongst Egyptians of the time was prevalent, so it was mostly the tradition of storytelling that spread the myths. It is suggested by some that this tradition of storytelling explains why little detail of the myths exist—every Egyptian knew about the myths. Evidence showing the survival of this oral tradition is precious little and it is pictorial and written sources that furnish the modern knowledge of Egyptian myths. Only few of these sources managed to survive to current times as many of the writings have been lost.