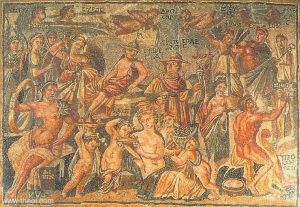 The ancient Greeks had several different theories with regard to the origin of the world. 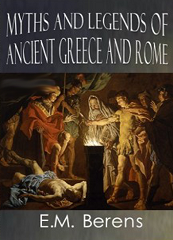 The ancient Greeks had several different theories with regard to the origin of the world, but the generally accepted notion was that before this world came into existence, there was in its place a confused mass of shapeless elements called Chaos. These elements becoming at length consolidated (by what means does not appear), resolved themselves into two widely different substances, the lighter portion of which, soaring on high, formed the sky or firmament, and constituted itself into a vast, overarching vault, which protected the firm and solid mass beneath.

Thus came into being the two first great primeval deities of the Greeks, Uranus and Ge or Gaea.

Uranus, the more refined deity, represented the light and air of heaven, possessing the distinguishing qualities of light, heat, purity, and omnipresence, whilst Gaea, the firm, flat,life-sustaining earth, was worshipped as the great all-nourishing mother. Her many titles refer to her more or less in this character, and she appears to have been universally revered among the Greeks, there being scarcely a city in Greece which did not contain a temple erected in her honour; indeed Gaea was held in such veneration that her name was always invoked whenever the gods took a solemn oath, made an emphatic declaration, or implored assistance. 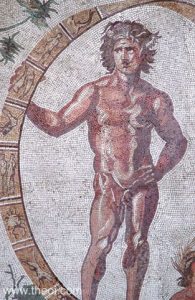 Uranus, the heaven, was believed to have united himself in marriage with Gaea, the earth; and a moment’s reflection will show what a truly poetical, and also what a logical idea this was; for, taken in a figurative sense, this union actually does exist. The smiles of heaven produce the flowers of earth, whereas his long-continued frowns exercise so depressing an influence upon his loving partner, that she no longer decks herself in bright and festive robes, but responds with ready sympathy to his melancholy mood.

The first-born child of Uranus and Gaea was Oceanus, the ocean stream, that vast expanse of ever-flowing water which encircled the earth. Here we meet with another logical though fanciful conclusion, which a very slight knowledge of the workings of nature proves to have been just and true. The ocean is formed from the rains which descend from heaven and the streams which flow from earth. By making Oceanus therefore the offspring of Uranus and Gaea, the ancients, if we take this notion in its literal sense, merely assert that the ocean is produced by the combined influence of heaven and earth, whilst at the same time their fervid and poetical imagination led them to see in this, as in all manifestations of the powers of nature, an actual, tangible divinity.

But Uranus, the heaven, the embodiment of light, heat, and the breath of life, produced offspring who were of a much less material nature than his son Oceanus. These other children of his were supposed to occupy the intermediate space which divided him from Gaea. Nearest to Uranus, and just beneath him, came Aether (Ether), a bright creation representing that highly rarified atmosphere which immortals alone could breathe. Then followed Aër (Air), which was in close proximity to Gaea, and represented, as its name implies, the grosser atmosphere surrounding the earth which mortals could freely breathe, and without which they would perish. Aether and Aër were separated from each other by divinities called Nephelae. These were their restless and wandering sisters, who existed in the form of clouds, ever floating between Aether and Aër. Gaea also produced the mountains, and Pontus (the sea). She united herself with the latter, and their offspring were the sea-deities Nereus, Thaumas, Phorcys, Ceto, and Eurybia.

Co-existent with Uranus and Gaea were two mighty powers who were also the offspring of Chaos. These were Erebus (Darkness) and Nyx (Night), who formed a striking contrast to the cheerful light of heaven and the bright smiles of earth. Erebus reigned in that mysterious world below where no ray of sunshine, no gleam of daylight, nor vestige of health-giving terrestrial life ever appeared. Nyx, the sister of Erebus, represented Night, and was worshipped by the ancients with the greatest solemnity. 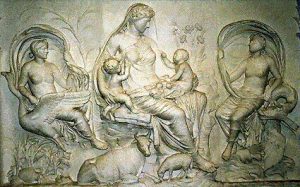 Two major myths that revolve around Gaea are the story of her children the Titans and the Giants. / Creative Commons

Uranus was also supposed to have been united to Nyx, but only in his capacity as god of light, he being considered the source and fountain of all light, and their children were Eos (Aurora), the Dawn, and Hemera, the Daylight. Nyx again, on her side was also doubly united, having been married at some indefinite period to Erebus.

In addition to those children of heaven and earth already enumerated, Uranus and Gaea produced two distinctly different races of beings called Giants and Titans. The Giants personified brute strength alone, but the Titans united to their great physical power intellectual qualifications variously developed. There were three Giants, Briareus, Cottus, and Gyges, who each possessed a hundred hands and fifty heads, and were known collectively by the name of the Hecatoncheires, which signified hundred-handed. These mighty Giants could shake the universe and produce earthquakes; it is therefore evident that they represented those active subterranean forces to which allusion has been made in the opening chapter. The Titans were twelve in number; their names were: Oceanus, Ceos, Crios, Hyperion, Iapetus, Cronus, Theia, Rhea, Themis, Mnemosyne, Phoebe, and Tethys.

Now Uranus, the chaste light of heaven, the essence of all that is bright and pleasing, held in abhorrence his crude, rough, and turbulent offspring, the Giants, and moreover feared that their great power might eventually prove hurtful to himself. He therefore hurled them into Tartarus, that portion of the lower world which served as the subterranean dungeon of the gods. In order to avenge the oppression of her children, the Giants, Gaea instigated a conspiracy on the part of the Titans against Uranus, which was carried to a successful issue by her son Cronus. He wounded his father, and from the blood of the wound which fell upon the earth sprang a race of monstrous beings also called Giants. Assisted by his brother-Titans, Cronus succeeded in dethroning his father, who, enraged at his defeat, cursed his rebellious son, and foretold to him a similar fate. Cronus now became invested with supreme power, and assigned to his brothers offices of distinction, subordinate only to himself. Subsequently, however, when, secure of his position, he no longer needed their assistance, he basely repaid their former services with treachery, made war upon his brothers and faithful allies, and, assisted by the Giants, completely defeated them, sending such as resisted his all-conquering arm down into the lowest depths of Tartarus.

From The Myths and Legends of Ancient Greece and Rome, by E.M. Berens, published by Erenow, public open access.